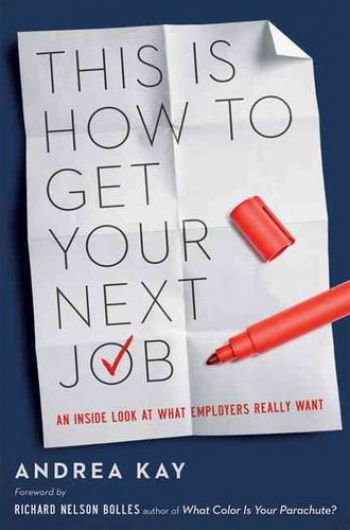 This Is How To Get Your Next Job: An Inside Look At What Employers Really Want. By Andrea Kay. Amacom. 245 pp.

“There’s no question that looking for work can be daunting. But what’s most likely holding you back from getting that much-desired job offer isn’t a matter of your skills or experience, but how potential employers SEE you.”—Andrea Kay

In recent years, bankers fortunate enough to have jobs have stayed put, happy with the bird in hand. But now those who feel confident have been looking around, especially if they have skills like compliance that are in demand, and some bankers have been caught in downsizings or layoffs.

Both groups may be finding themselves looking around for the first time in years, and things have changed. And some basics haven’t.

Fear not! Author Andrea Kay, career consultant and syndicated columnist, presents an inside look at what employers really want from candidates. She gives solid advice,  straight, to the point, and in a friendly tone.

And in an age where you can blow an opportunity before you even have an interview, she warns the reader about traps and common errors. If you are looking, she understands what you are going through:

“I cannot recall a time in the last three-and-a-half decades when somebody, somewhere, was not feeling distressed about his or her career, ability to get work, and overall financial well-being.”

Jobs are out there, but are you ready to go find one?

In her introduction, Kay says she had two reasons for writing This Is How To Get Your New Job:

1. She couldn’t stand how she kept yelling at the radio, when talk show callers would swear they could not find any jobs.

2. She wanted to know if her husband was crazy. He had been unable to find a qualified employee for his small business for more than six months.

Kay realized the issue at hand was a complete mismatch of priorities and expectations. She discovered this in the course of interviewing executives at small, medium, and large companies across a variety of industries, and in discussing today’s challenges with her own clients and readers of her syndicated column.

Yes, experience and skill matter, Kay acknowledges. But the common barrier faced may be eluding the hopeful but unsuccessful job seeker.

“You are what you seem”

Kay begins with this key to today’s career search. When interviewing employers and asking why they didn’t hire the last ten people interviewed, the unanimous answer Kay heard over and over again was that the turndown came because of how the job applicant “seemed,” based on how they acted.

Take one of her examples, an employer where job interviews begin with two seemingly innocuous steps: The candidate is offered a seat, and asked if he or she would like a glass of water.

But this company is conducting a test. If you fail to say “Thank you,” after being offered the water, you’re done.

At this company, being polite represents a keystone of corporate culture. If you can’t express gratitude over a simple thing, they have no interest in you. Period.

There are many uncontrollable factors that can affect how you seem. These include factors such as preconceptions, personal beliefs, the weather, just about anything. But Kay focuses on what you can control.

Much of what Kay mentions seems so simple, so easily done right. Yet her experience and her research indicate that failure to get simple things right has derailed more than a few applicants. Consider this sampling of questions to ask:

• Do you follow-up as you say you will?

• Do you use good judgment?

• How do you handle feedback?

• Do you just want a job or a career?

You will be judged by your actions. So it’s wise to pay close attention to every step you take. Employers assume that how you act before, during, and after an interview is how you will act on the job.

The author details 17 traits that employers are looking for. They encompass behaviors, qualities, characteristics, sensibilities, attitudes, and demeanor. We are reminded that some jobs may require particular skills, knowledge, or expertise, but that to be a really good candidate you will offer more than the requisite skills.

A key point of Kay’s: Employers are constantly trying to figure out if you are a good fit.

The book also provides a detailed self-assessment called the “Would You Hire You?” Test.

At the end of the questions, Kay asks, if you were an employer, would you hire you? Or would your behavior put doubts in your mind? She also gives advice on how to not “overthink” the process and how to keep yourself, in advance, from saying things that you know you shouldn’t say.

The choke points of the job hunting process

An interesting fact that the book shares is how companies have difficulty recruiting because of gaps in four areas: critical thinking and problem solving; professionalism and work ethic; written communications; and leadership. This comes from a 2011 survey of more than 2,280 human resource professionals in 8 industries conducted by the Society for Human Resource Management.

“Tell and Show” is the second chapter of the book. If you tell an employer that you are great with follow-up and they ask you for references, and the references don’t show up until a month later, you are showing them how bad you are with follow-up.

First and foremost, decide how you want to be seen. Before, during, and after your interview will be the key times you can show how you are. The book provides an exercise to help you determine the qualities you want to exhibit; the beliefs and attitudes you want to convey; how you want others to feel in your presence; how you want to approach problems, people, and opportunities; and the top skills, knowledge, and experience you bring to an employer.

The author includes a great quote from Mahatma Gandhi:

Your beliefs become your thoughts.

Your thoughts become your words.

Your words become your actions.

Your actions become your habits.

Your habits become your values.

Your values become your destiny.

Sometimes, a job possibility fails simply because of sloppiness. How would your bank feel about a candidate whose communications included spelling errors? Or math mistakes?

Interviews aren’t about the job

The author states that “getting a job” is not the objective of the job interview. It’s an opportunity to hold a conversation. And you are going to be judged on the basis of that conversation. Kay presents numerous tips on how to get it right.

Among the “15 things you should never do” are specifics like don’t act clueless about the company, job, or yourself. Don’t get defensive. Don’t be late—one thing that seems apparent but is not. Don’t be too casual—your future boss is not “Dude.”

Beware of what you put out on the internet about yourself. Because companies are obligated to find as much information as possible about a potential candidate, many of them will be looking at social media. (Some surveys indicate as high as 91% of hiring managers and recruiters take a look at this.)

Most want to see if you present yourself professionally. When surveyed about what they saw that they didn’t like, employers cited provocative or inappropriate photographs. This was followed by drinking and drug use right on social media pages.

But beyond these social media errors are poor communication skills, badmouthing employers, making discriminatory comments, and lying about qualifications.

Some other “don’ts” that should go without saying are to not cheat on tests, not chew gum or eat at an interview, not be rude or aggressive, to not hold phone interviews on speakerphones or cell phones, and to turn your cell phone off in an interview.

I actually was asked to interview over breakfast and still recall the person, who was my future boss, eating pancakes like a starving person while he interviewed me.

Just don’t bring it up

The author also addresses in “15 Things You Should Never Talk About or Say” in the interview. She presents specifics such as not talking about bad bosses and companies or ex-husbands or wives. In fact, she suggests avoiding negative things in general.

Beware of what comes across as your priorities. Kay advises against asking about money, perks, and other “what will you do for me” items.

It’s appropriate to discuss money after you get an offer, she says. But any employer will be turned off if the first thing you say is something like, “How many sick days will I get?”

Resumes remain important because they can be the item that takes you out of the running right away.

One employer stated the resume challenge quite well when he said, “It’s all about a glance—make that glance count.”

Kay says candidate must keep things like these out of their resumes: buzzwords, non-words, and statements like “I just want to learn” or things that are not easily understood.

The author gives examples of the latter. One concerns the time she asked a job hunter about her expertise. The woman said she knew all about “gift proposals.” To Kay, this sounded like something she would do with her husband at Christmas. It turned out to be a way to make charitable donations.

But when people don’t understand what you are saying, they stop listening to you.

You are what you wear

You have probably heard the saying, truth is stranger than fiction. That leads us to Kay’s list of “10 things you should never wear.”  Being conservative bankers, it is hopefully difficult to imagine this being an issue, but the next section of the book gives helpful advice like not wearing Hawaiian shirts to interviews, removing nose and tongue rings, and not wearing flip-flops.

The final chapter ends with things you should never do once you get the job and in your career. Examples include not burning bridges, not being a know-it-all, not forgetting who helped you get to where you are.

The author summarizes her book in the conclusion by saying that most everything she talked about comes down to something she heard from Kofi Annan, former Secretary General of the United Nations, “Character trumps everything” and reminds us that it’s not what or who you know but how you are.

More in this category: « Boarding the bus bound to Cooperation How to tell business stories that stick »
back to top