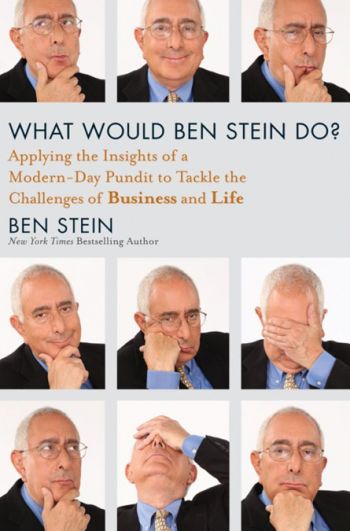 What Would Ben Stein Do? Applying The Insights Of A Modern-Day Pundit To Tackle The Challenges Of Business and Life. By Ben Stein. John Wiley & Sons, Inc., 210 pp.

“It all begins with work. If I am dwelling on work in this tome, it’s because I believe work is an almost supernaturally powerful force for good. Freely chosen, freely entered into work—done with the utmost of devotion—that’s as potent a step towards mental well-being as there can be.”—Ben Stein, in What Would Ben Stein Do?

Where can one go today to find sound advice overflowing in wisdom?

Ben Stein turns out to be a deep well of intelligence. What Would Ben Stein Do?  is filled with chapter after meaningful chapter on a wide variety of topics.

When I think of Ben Stein, I recall his observations on Fox Business Network, his commentaries on CBS Sunday Morning and, of course, his now-classic movie role in “Ferris Bueller’s Day Off” as the boring economics teacher.  (“Anybody? Anybody?”) Stein has serious credentials. He is a graduate of Yale Law School, was a speech writer for Presidents Nixon and Ford, and has been a columnist for both The Wall Street Journal and The New York Times.

So, given this background and given our perceptions of Ben Stein, is a book of his opinions worth reading of this book?

In many respects I would say yes.  The subjects covered are so wide and varied; there is a morsel of knowledge for everyone as either confirmation of an action considered or new insight. The book runs 33 chapters, but do not be discouraged. Some chapters, such as “Gratitude, Revisited” are only a page or less in length.

By the way, that short chapter is one that is very much on target. Gratitude is a trait in terribly short supply at all levels today.

Given what I knew about Stein’s writings and commentary, my expectations were for insights on the economy, investing, and money management. The book covers these to some extent—but the beginning chapter was about marriage and regarded it as “a big, big deal.” The following chapters covered character, work, and personality as they relate to marriage and life.

Being an older—perhaps I should say “experienced”—and financially focused person, Stein’s viewpoints are pretty much spun into my own DNA.  My views differ at times in limited examples from what the book represents. As such my reaction may be somewhat reserved in nature compared to those with widely different viewpoints.

I found myself saying “Well, of course!” or “Good for Ben!” when his insights, opinions, and proposed solutions are somewhat, at times vastly, different from the pop culture of the world.

As I read through the book I was also lamenting that such a book is needed.

In decades long past we were given at times books on manners and how to act in a situation, but rarely one that covered so many varied topics. Did Stein see our culture sliding to such an extent that he felt called upon to throw out a summary of opinions that are being pushed aside?

Perhaps Stein wanted his readers to be reminded that some goals are still worth attaining for a reason. Personal growth in all areas of life does have a place for success.  Stein talks of marriage from several angles, tipping, the need for savings, the importance of friendship, the value of silence, progress, and tax policy. A very eclectic mix.

One of my favorite chapters was Chapter 29, “Education: To Read or Not to Read.”

I liked the topic, coming from an education-focused family, and I appreciated Mr. Stein’s thoughts on the subject. Sad examples of the lack of historical background many of our fellow Americans have illustrated his call for better education.

Showing a woman a photo of Jefferson Davis, Stein describes an almost morose comical routine triggered by a picture:

“Well,” she said, “I cheated. I can see under your hand that it’s Thomas Jefferson.”

“He was the president of the Confederacy, “ I said. “The southern states that seceded in the Civil War.”

“In what way did they succeed?” she asked brightly.

“I didn’t say they succeeded,” I said. “They seceded. They left the Union. And they tried to form a country, and their president was Jefferson Davis.”

“So, then who was Thomas Jefferson?” she asked. And she has a PhD.

I can imagine Stein’s facial expression after being part of that conversation.

In all, the book has a lot to give. Stein is a well-known pundit in this country and has earned the right to voice his opinion.  His humor does come out in many of the chapters and provides an excellent cushion to present some strong opinions.

The book does not flow easily from chapter to chapter but that may not be Stein’s goal. After finishing a chapter on “You Are Not at the Center of the Universe,” a time of contemplation should be in order before heading into another direction with “The Next Indicated Action,” a chapter on acceptance, quickly followed by “You Are What You Drive,” a chapter on cars.

This book is essentially a series of essays.

Essays where everyone will find something to take away. Stein is sure to provide a piece of wisdom or two or three to every reader.

This is a book for a good laugh, some excellent reminders, and a short break from the sometimes goofiness in today’s world.  Enjoy.

More in this category: « What’s stopping you from being an innovator? Decision-making data right at your fingertips »
back to top