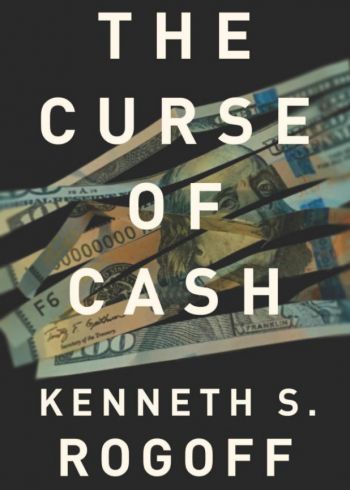 The world is inundated with paper currency. Central banks are pumping out hundreds of billions of dollars’ worth of currency each year.

As Kenneth S. Rogoff’s The Curse of Cash makes clear, the great majority of this cash takes the form of very large denomination notes such as the $100 bill, which accounts for almost 80% of the United States’ stunning $4,200 per capita cash supply.

The first part* of the very readable Curse of Cash briefly discusses the history of currency; the size and composition of global currency supplies; holdings of currency in the legal and underground economies; and “seigniorage”—the difference between the value of money and the cost to produce it.

Over the years, there have been informal discussions in some law enforcement and policymaking circles about the eventual elimination of large currency notes. The goal of this would be to help disrupt various types of crime, money laundering, the underground economy, and tax evasion. Rogoff summarizes the arguments.

Rogoff, a Harvard University professor and former chief economist of the International Monetary Fund, also acknowledges some of the issues that intersect with the large currency matter. There matters of privacy, financial inclusion issues, inconveniences, and resistance to change.

All of this suggests that the reform he advocates is not going to happen in the near term. But in my opinion, Rogoff deserves kudos for advancing an “out of the box” anti-money laundering (AML) countermeasure.

We need more imaginative ideas in this area, because our current AML countermeasures are not working.

Simply divide the amount of money laundered around the world by the amount of dirty money actually forfeited. Total failure is only a decimal point away.

(You can double the aforementioned quantity by adding tax evasion, which is a predicate offense for money laundering in some jurisdictions.)

Cash is attractive to criminal organizations because it is anonymous. Generally speaking, its use makes it very difficult for criminal investigators to follow the money trail. Narcotics sales in the U.S. may generate as much as 20 million pounds of currency every year. (I’m referring to weight here, not British currency.)

Much of that initial income comes as small denomination notes. It becomes a logistics problem for money launderers. It takes 50,000 $20 bills, weighing more than 100 pounds, to make $1 million.

Conversely, the same amount in $100 notes can fit into a large satchel or duffle bag. Law enforcement knows that criminal organizations are at their most vulnerable when attempting to “place” large amounts of cash.

The Curse of Cash suggests parallels to our bulk cash smuggling challenges which, according to the international Financial Action Task Force, represents one of the three primary money laundering methodologies found around the world.

Tens of billions of dollars of narcotics proceeds are smuggled across our southern border into Mexico every year. Despite the valiant efforts by our law enforcement professionals to stem the tide, buttressed by initiatives such as the National Bulk Cash Smuggling Center, according to the government’s own numbers we are probably intercepting less than 1% of the proceeds of crime.

Moreover, a small army of individuals are involved with the logistics of this trade. Their chances of getting caught, prosecuted, and convicted are remote at best. Regrettably, in my view, getting rid of the $100 note is not going to stop it.

Tax evasion and the underground economy

Rogoff makes a compelling case that the use of cash also drives forms of tax evasion (perhaps $700 billion a year in the U.S., including federal, state, and local taxes), and even more in high-tax jurisdictions such as Europe.

The most egregious area of tax non-compliance comes from underreporting business income by individuals who conduct a significant share of their transactions in cash.

Corruption, racketeering, human trafficking, extortion, the finance of terrorism, and many other crimes are all facilitated by cash. This is one reason why the European Central Bank (ECB) recently decided to permanently stop producing €500 banknotes.

Rogoff argues that doing so would force the underground economy to employ riskier and less liquid payment devices.

Once again I would argue that the very magnitude of global criminal activity—coupled with lack of anti-money laundering enforcement—suggests that Rogoff’s proposals will only present a slight impediment for the criminals—perhaps a speed bump, but not a wall.

I also believe Rogoff’s plan does not adequately take into account the disruption that getting rid of $100 notes would have in other countries.

Most Americans do not realize it, but there are many more U.S. dollars abroad than at home. The dollar remains the world’s de facto currency. When a South American businessman buys Chinese electronics, he pays in U.S. dollars. When central banks hold foreign reserves, they favor dollars.

In a number of countries—such as Ecuador, El Salvador, and the British Virgin Islands—the U.S. dollar is the national currency.

And, all over the world, when things go bad, people hoard $100 bills.

Some northern European countries—where money laundering is not a significant problem—are already headed towards a cashless society.

The technology exists and their comparatively homogeneous, well-educated, and younger populations welcome the transition. Rogoff feels such a move for the U.S. is “neither feasible nor desirable anytime soon. But a less-cash society would be a fairer and safer place.”

Rogoff is a Professor of Public Policy at Harvard University. While I am pleased he focuses attention on the link of cash to crime, I am doubtful that his call for less cash would realistically do much to stem money laundering unless accompanied by enhanced enforcement and other robust countermeasures. This is the public policy discussion we should be having.

*Editor’s Note: The Curse Of Cash also includes sections dealing with the phenomenon of negative interest rates and digital currencies, including the hypothetical “Bencoin.”

Reviewer John Cassara is a former intelligence officer and Treasury Special Agent and the author of Trade-Based Money Laundering: The Next Frontier In International Money Laundering Enforcement, Wiley, 2015. More information can be found at www.JohnCassara.com

More in this category: « Trapped in a hole of their own digging Living in Pottersville »
back to top