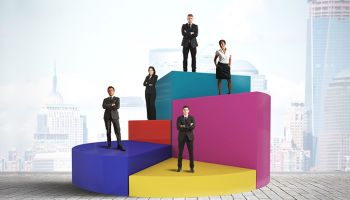 On one hand, the bank’s specific goal is to attract and retain key employees through the provision of employee ownership. On the other hand—and therein lies the rub—there is the conflicting overall strategic goal and existing shareholders’ desire not to lose control.

Concern for one in three community banks

Approximately one-third of community banks are Subchapter S corporations. By definition, those banks are “closely held.” Many of them are family controlled institutions, and many others have several shareholders, but none have more than 100 shareholders. (That’s counting six generations of one family as one shareholder.)

The primary driver in a family owned or closely held bank with control ownership is typically the desire to maintain that control position. For example, if the family or the control group controls 51% of the stock of the company, notwithstanding their strong theoretical desire to provide employee ownership as a way to attract and retain quality personnel, it is unlikely they will give up that absolute control for the good of the cause to provide employee ownership.

Not surprising. But there are some exceptions to that common experience.

For example, if the company needs capital and desires to do so, it may be possible for a 51% owner to give up absolute control for the effective control it can maintain through an employee stock ownership plan or a KSOP. With a KSOP, the company has the opportunity to go to the employees and give them the opportunity to invest some portion of their existing 401k in holding company stock.

That would generate additional capital for the holding company but also involve the issuance of additional shares. In that case, for example, the control family may go below 50% in actual ownership because of the issuance of shares to the KSOP. They arguably would, however, maintain effective control over the holding company due to its actual control over the KSOP through its trustees. The plan’s trustees are members of the bank’s own board.

That’s the theory, anyway. For the most part, however, control owners are not willing to reduce control by providing share ownership to employees—at least not in a big way.

More ways to skin a cat…

So what are the alternatives?

One choice would be to engage in a redemption program. The holding company buys back stock from existing minority shareholders and issues those shares to the employees, directly, or, indirectly, to the KSOP. Initially this would cause an increase in the control owners’ proportionate ownership, but, upon the issuance of the shares to the KSOP, the control owners’ ownership percentage would return to its pre-repurchase level. As a result, the employees have ownership—yet control is unaffected.

Unfortunately, that does not always work because, in a closely held institution, often there are very few shareholders willing to sell.

So what is a community bank board in a closely held institution to do?

It has a couple of choices. It can either issue “stock appreciation rights” or “phantom stock” to the employees. Because neither of these types of employee benefit involves the issuance of actual shares, there is no dilution in ownership percentage of any of the control or majority owners. Each of these mechanisms, however, gives the employee a benefit, the value of which is determined based on the value of the stock.

Here is how the two techniques differ:

• Phantom stock works somewhat differently. If the bank elects to use this technique, then, typically, the employee would be “allocated” a certain number of phantom shares on day one.

At the end of the five-year period when the employee was to receive a benefit, instead of just receiving the $100 benefit (as in the SAR approach), he or she would receive the entire $200 benefit based on the full value of an equivalent share of stock.

Keep in mind that unlike an ESOP or a KSOP (which are qualified retirement plans subject to IRS and Department of Labor rules), stock appreciation rights plans and phantom stock plans are nonqualified plans. As such, they can basically be designed any way that the board sees fit, subject to certain considerations.

There are some restrictions on these in connection with Subchapter S corporations, and, of course, a few pitfalls you need to look out for. But conceptually, these make sense where there is a concern with respect to ownership dilution.

In subsequent blogs, I will deal with the issue of employee ownership through the actual issuance or grant of shares where ownership dilution is not an issue.

More in this category: « 5 terms regulators love to use How employee ownership can work at widely held banks »
back to top