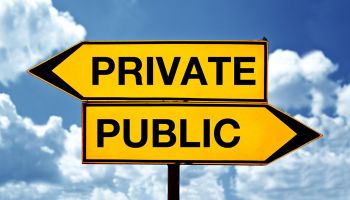 “Public or private” is quite a debate in community bank boardrooms and C-suites these days. After all, it’s all about the future form of ownership for the banks.

As you may know, the JOBS Act of 2012 raised the threshold on the number of shareholders a bank holding company could maintain and still be a private (non-SEC reporting) company.

But I am getting ahead of myself.

The real question is should your bank holding company be public, private, or very private?

This blog will just deal with public versus private. We will save Subchapter S for a later blog.

Pluses of being public

To start, it would probably be helpful to identify the advantages of being a public company. The two most commonly referenced advantages are immediate access to the public capital markets and market liquidity for your community bank holding company’s shares.

Additionally, achieving public status increases the availability of information on your bank and holding company for the general public. It gives your holding company the privilege of disclosing all kinds of intimate data, including compensation.

It also puts more data out in the public (including public who are attorneys) and as a practical matter, increases the likelihood that one of your directors or officers may be sued.

Being public also gives the company’s directors and officers the opportunity to make a public filing every time one of them buys or sells a share of stock, so that the whole world knows about it. The holding company also gets to file an 8-K every time something a little crazy at the organization occurs, and the “crazy” rises to the level of “material.”

And as a final benefit, public company status provides the holding company the opportunity to pay your lawyers and accountants a significant amount of money to deal with these and more issues.

In all seriousness, there are advantages to being a public company, but many of those advantages are theoretical when applied to your typical community banking organization.

Pluses of being private

On the other end of the spectrum, there are also benefits to being a private organization.

Not only does the holding company not have to produce a 50-page quarterly report and annual proxy materials, but it does not have to allocate valuable resources, human and financial, to produce all those reports.

Also, private company status gives the board greater control over the company’s shareholder base and stock price.

Your company essentially gets to make its own market in its stock and set the price for that stock, which means it only gets new shareholders when it wants to for strategic purposes.

Of course this means that average Joe a few states over will never be able to own stock in your company.

But the reality is that Joe would not purchase your company’s stock even if the means and the appropriate financial information were available to him.

So, what’s your choice?

Lately it seems as though some of the larger community banks prefer to utilize truly public offerings, though I would not call it a trend. These are generally companies that are already public and do not necessarily care whether they add to their shareholder base or not.

Some people think I am anti-public reporting company. I am not. Not at all. What I am is anti-wasting-money.

If your community bank holding company is an SEC-reporting company and it has all the pain of SEC reporting with none of the gain, i.e. access to the public capital markets and market liquidity (neither one of which are guaranteed even as a public company), then why bother?

You are paying for form over substance, and you really ought to consider going private.

Although the mechanism to take a company private is beyond the scope of this brief blog, basically, it occurs through a discriminatory merger transaction that allows the company to reduce and concurrently clean up its shareholder base.

Does that use up some capital?  Sure. The decision as to whether that is the best use of shareholder capital is ultimately up to the board. That said, it seems to me saving $200,000 to $300,000 a year, year over year, is probably a pretty decent return.

More in this category: « How the chairman sets the tone Succession, the two-sided coin »
back to top