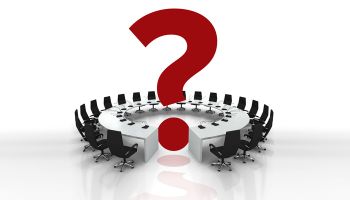 How many is “right”?

If your bank or bank holding company is going to deal with director succession, the place to start is to determine whether any “slots” on the board of the bank or the holding company are available. To make this determination, you have to identify the “ideal” number of directors for the board.

Although I’ve found many chief executive officers believe the ideal board size is “one,” the reality is typically somewhere between seven and 11 members. I have seen boards that are much smaller—a holding company board of three, for example, in a closely held bank. I have also seen boards much larger. One board in particular I worked with had slots for 23 directors as a result of an acquisition. The board consulted with me to help them whittle that number down.

If the board currently has ten members, would the board be more effective and efficient with eight or nine members?  11 or 12?  If the board consensus is that the board would be better at 12, then obviously there are two slots available. Beyond that, there could also exist pending slots within the existing directorate.

Is the board aware of when older directors intend to step down?

Has the board conducted any evaluations to determine whether any directors are weak links and how to remove them from the board?

If one director does not intend to stand for reelection next term and another director is simply not pulling his or her weight, then the board has two additional slots for which it must develop a succession strategy.

There is no magic number here, but a board cannot truly address board succession issues if it does not understand the ideal board size for its bank or bank holding company.

Once the board determines the number of vacancies or slots on the board, its next step is to determine what skill sets, qualifications, and other issues are important to the board as a whole.

Does the board need to add a lawyer?  An accountant? An individual specialized in commercial real estate or agriculture?  Manufacturing?

What about age?  Does the board need younger directors?  More experienced (i.e., older) directors?

Is the board appropriately diverse with respect to gender?  Ethnicity?  Race?

Typically, the process for determining the appropriate board composition begins in the board’s Corporate Governance Committee (or some other similarly named committee). That committee typically polls the board as a whole, comes up with recommendations as to the ideal director’s skill sets, and then solicits from directors names of individuals that may fit the bill.

After some soft investigation and narrowing the pool, the committee approaches the new potential director(s), and gauges the individual’s interest in joining the board (after convincing him or her that Armageddon has not, in fact, hit community banks).

Should new directors have ownership?

One issue that often comes up in considering director qualifications is the importance of a new director having some stock ownership in the organization. In other words, should the director have “skin in the game?”  In my opinion, the answer is an emphatic “yes.”

The reasoning is simple. You do not want somebody running your personal business if that individual has no financial interest in the business’ success or failure. The same goes with a community bank.

I have seen some banks that have had a $250,000 requirement for any new director coming on, though some of them allowed the directors to build up that much stock over a five-year period. One bank’s requirement was as low as $25,000, and some banks have no requirement at all, other than director qualifying shares.

Regardless, there has to be some meaningful requirement so the director pays attention to the bank as it relates to his or her personal investment, which aligns the director’s financial interest with that of the other shareholders. This is a substantial incentive to ensure directors focus on their real job of enhancing shareholder value and should not be overlooked in director succession.

As an aside, back in the previous recession (the one prior to the Great Recession), I was always amused by the directorship provisions in regulatory orders. These orders uniformly required the board to add a couple of independent directors while the bank was under the Cease and Desist Order.

In my opinion, anyone willing to join the board of a community bank that was under an order subject to civil money penalties is an individual lacking in common sense— such that the board should not want to add him or her as a director.

Thankfully, this is no longer the case. Most banks are not under regulatory orders these days, and things are generally looking much better in the industry, so the community bank director position can again be classified as an “honor.”

As I have indicated in previous blogs, it is not an honor without risk, but it is still an honor.

More in this category: « Get real about strategic planning in 11 steps Cyber, other tech risks shadow boardrooms »
back to top