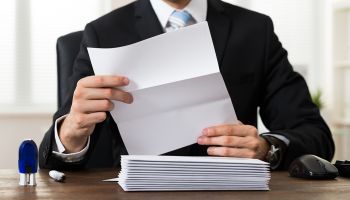 Does a letter from one of your community bank holding company’s shareholders have to strike terror into your heart as a CEO or director of a community bank? Not necessarily, but you should handle it carefully.

Mail call in the corner office

In recent months, we have assisted a number of our clients in announcing many different transactions, ranging from branch acquisitions to bank acquisitions to Subchapter S conversions.

Often a shareholder will see a public announcement and send off a letter (or these days, an email) to the chairman of the board or CEO of the community bank inquiring about the transaction. My experience over the last 40 years is that most of those letters are fairly innocuous and really should not cause panic.

Some of them, however, are the first step toward the shareholder initiating litigation with respect to the subject of his or her inquiry.

So what does your community bank holding company do when it receives a letter from a shareholder?

First of all, handle it gingerly.

Tacks you can take

If the letter is simply inquiring about some public announcement that the bank has made recently, be sure you respond to it in a forthright, honest, and brief matter.

For example, “Why are you selling the bank to XYZ Company?”  Answer: “Because we felt that was the best way to enhance shareholder value over the long term,” or something similar.

It is also possible for a shareholder to write the community bank inquiring about something other than a transaction. For example, the shareholder may simply demand a copy of the stockholders list under the state corporate statute.

The first step is to carefully review the state statute that relates to shareholder requests for certain corporate documents.

Keep in mind that your bank holding company and your community bank are each a creature of state law. Historically, bank holding companies that we formed around the country were always incorporated in Delaware. In the last ten or 15 years, we have generally formed them in the state in which the bank is located (primarily because those states have now adopted the Model Business Corporation Act, which is patterned after Delaware’s corporations’ code).

Abide strictly by the law

Despite the statutory similarities, all state statutes are not the same when it comes to shareholder requests for corporate documents, so they need to be carefully reviewed.

As an example, one of the state statues that we recently went over for a client contained the following provision:

In my example, that would be a list of the shareholders with each number of shares across from the name—but no P.O. Boxes, contact information, or anything similar. Those items are not expressly listed in the state statute. Even if the shareholder requests them as part of the stockholders list, they should not be provided by the holding company.

A time to call the lawyers in

In most situations it is probably prudent to provide the list to the requesting shareholder. Still, because the request for a shareholders list is often the start of the process of moving toward litigation, you should get your lawyers involved early and often.

This is not only to make sure that the bank holding company correctly complies with the statute, but also to let the requesting shareholder know it is going to cost him or her some money to move forward with this because the holding company already has counsel.

Bottom line: Don’t panic when you get a shareholder’s request, whether it is related to a transaction, demanding the shareholders list, or any other reason. That said, do respond openly, honestly, in good faith, and in strict compliance with the statute.

Going above and beyond is often a best practice, but not when it comes to shareholder letters and demands.