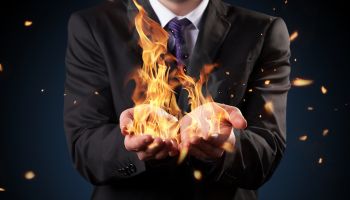 At the height of the financial crisis, in my blog at that time, I wrote about the “Examiner from Hell.”

The subject of that blog—you can revisit it and earlier followups at the end—was an examiner who had criticized a community bank client of mine which had consented to a formal enforcement order.

Yes, you read that correctly. The bank was criticized because it took action before it needed to.

At that time, I expressed (in no uncertain terms) that this was clearly the examiner from hell.

Unfortunately, that was not the only examiner from hell I ran into back during the Great Recession.

I tried to determine whether all of these examiners lived in the same pod somewhere or perhaps were a part of the same fraternity/sorority of examiners from the underworld. My efforts were in vain.

The other day, as I was contemplating a client’s recent examination, I noted that although there are still some traits of the examiner from hell appearing on occasion, relationships with examiners in general (particularly in the safety and soundness area) have improved.

The improvement is, in my opinion, solely due to bank’s improved asset quality over the past few years. Back during the Great Recession, the examiners had a lot to “shoot at.” The asset quality snowball “was fully rolling downhill” (i.e., bad loans, increased reserve, lower augmentation of capital, less earnings), and all of a sudden management became a bunch of incompetents in need of regulatory discipline.

As noted, and as known by most bankers, the examiner from hell still raises his or her ugly head out there in the trenches.

Mind your head, here he comes

One of the current favorite things from both FDIC and the Comptroller’s Office is utilizing the Management rating in the CAMELS rating system (Capital, Assets, Management, Earnings, Liquidity and Sensitivity) as a “club.” (I have not seen this from the Federal Reserve.)

In a recent visit, however, the examiner was reviewing with the board of directors the proposed rating of the bank, and the ratings were all “1,” except for the Management component, which was a “2.”

The bank’s CEO understandably asked the examiner “Do you think this bank runs itself?”

The examiner’s comment was that the bank had not done what it was told during the previous exam. The client retorted that bank management had not only done what was requested in the last exam, it had, in fact, made a checklist and gone through the exam report line-by-line. Somewhat surprisingly, the examiner acknowledged that what the CEO said was correct.

“Then what in the world is the problem,” you ask?

Can you get any more subjective?

But relations have improved

Although the Management rating is now being used as a club, it is still worth noting that the regulators have grown much kinder and gentler, particularly with seriously troubled banks.

Although there were only 203 banks on the FDIC’s “problem bank” list as of Sept. 30, 2015, our consulting and law firms happen to work with several of them. I recently attended a meeting with the board of directors of one troubled bank and its friendly federal regulator.

(An aside for those of you who have not been to one of these troubled bank meetings with the regulators, you should know that if you have nine directors and your outside counsel or consultant, there will still be double as many regulators in the room. Who knows why? It is simple the way these meeting typically work.)

Anyway, during the Great Recession, this particular meeting would have been a table pounding event where the regional office personnel would indicate that if the bank does not get capital, the regulator is going to close the bank,  sue the board, etc., etc.

This meeting, however, was different. No, there was no hand holding or Kumbaya around the campfire, but it was an overall friendly affair. The regulators basically took the position they did not need another closed bank. They hoped the bank raised the capital and would give them time to do that, but if the bank could not, then the regulators would have to do what they had to do.

I would say that is over all more kind and friendly that we became accustomed to during the Great Recession. At minimum, it is a much different approach.

The bottom line is the whole safety and soundness piece of the regulatory environment has gotten much kinder and gentler, which is a good thing for everyone.

Unfortunately, this is not so much the case with respect to compliance—but that will have to be the topic for another blog.

Editor’s Note: We’ve resurrected the original “Examiner from Hell” blog for your interest, as well as a couple of followups Jeff Gerrish wrote.

• The Examiner From Hell (A True Story)

• Thinking Back, And Forward, On That Wonderful Fellow, The “Regulator From Hell”

Gerrish formerly served as regional counsel for the FDIC’s Memphis regional office and with the FDIC in Washington, D.C., where he had nationwide responsibility for litigation against directors of failed banks. Since the firm’s formation in 1988, Gerrish Smith Tuck has assisted over 2,000 community banks in all 50 states across the nation with matters such as strategic planning, mergers and acquisitions, common stock private placements, holding company formation and reorganization, and a wide variety of regulatory matters. Jeff Gerrish can be contacted at jgerr[email protected]

More in this category: « Thinking Back, And Forward, On That Wonderful Fellow, The 'Regulator From Hell' 4 issues you can’t duck anymore »
back to top