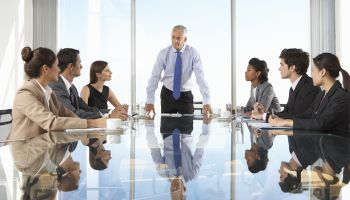 The chairman's shoes are large ones to fill when the job is being done right. Who should wear your bank's next?

As I have written in these blog posts many times before, when it comes to remaining independent, management and board succession are critical issues for your community bank. Part and parcel of board succession involves chairmanship succession.

I have run into a number of situations recently where our community bank clients are wrestling with chairmanship succession. In this blog I will address:

1. A Chairman’s duties and responsibilities

2. How to select the next Chairman for your community bank and its holding company.

What the chairman does

The chairmanship position should not simply be “ornamental.” The role of the Chairman is not simply to show up every month, gavel the meeting open, hand it off to the CEO, and take a motion to adjourn.

Although many community banks operate in that fashion, that is not the most beneficial use of the position. So what is the Chairman supposed to do? How about some or all of the following:

• Serve as a liaison from the bank to the shareholders.

• Conduct meetings of shareholders and facilitate general relations with the shareholders.

• Conduct board meetings and serve as board disciplinarian.

• Lead the board dealing with risk issues.

• Actively engage in his or her trade or business in the community.

• Actively promote the bank through calls on customers and prospects and by participating in civic and community activities.

• Oversee the execution of the bank’s long-term strategies.

• Serve as a liaison between the CEO and the board while avoiding micro-management of the CEO.

• Manage the affairs of the board, including ensuring the board is organized properly, functions effectively, and meets its obligations and responsibilities.

• Maintain and enhance the quality of the board’s governance;

• Lead a formal evaluation of the CEO’s performance at least annually.

• Develop and approve the agendas for board meetings.

• Lead the board in execution of its responsibilities to shareholders.

• Take the lead in evaluating the performance of each board member in his or her role as a director on an annual basis.

How do you pick one?

This list of duties, though not exclusive, is fairly comprehensive. The real question, however, is how do you select an individual to serve in a Chairman’s capacity and execute on the Chairman’s duties?

• Is the next Chairman the one who owns the most stock?

• Is it the director who has been on the board for the longest time?

• Is it the director with the “right last name”?

How should the Board select the next Chairman?

My recommendation is that the board not hold a popularity contest, but instead determine the needs of the bank for the future (i.e., direction, risk, succession, interaction with the CEO, attracting future board members, new shareholders, whatever the need is of the institution) and then determine which of the existing directors, if any, best fit that bill.

In other words, let’s hire for the Chairman’s role.

Let’s not just appoint the oldest director or the winner of the beauty contest. Being Chairman of the Board of a community bank is a leadership role. It has become much more so post-Great Recession. Do not simply put an individual in that Chairmanship role unless that particular individual otherwise meets the qualifications and they have the ability to execute as Chairman.

A word about term limits

Seriously consider term limits for Chairmen. Once an individual is elected to the job, even though he or she is elected by the board of directors on an annual basis typically, once the individual gets into that Chairman slot, it often devolves into a “chairmanship in perpetuity.”

This is not entirely healthy for most community banks. Think about utilizing term limits even if they are longer, such as five years. And you may even allow the Chairman to succeed himself or herself once. At least you will get some new blood in that chairmanship role.

In any event, do not make the Chairman simply the “hood ornament” on the bank and its holding company. This is a much more important position than simply to be ceremonial. Think about it the next time the chairmanship becomes available in your institution.

More in this category: « Protect your best—or suffer next “lift out” Examining Fed’s proposed guidance for bank boards »
back to top