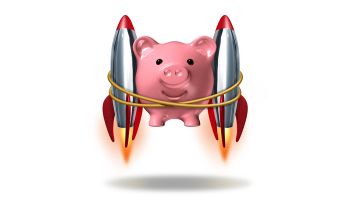 There’s a new trend in payments that’s suddenly all the rage: speed.

Based on widely diverse announcements and reports, speed has topped the agenda in a number of payments-related spaces, from simple checkout times, to mobile wallets, to same-day ACH.

Which is somewhat ironic.

From barter to bucks to bitcoin and beyond…

Originally, all payments were instantaneous. You bartered your cow for a bag of beans and, presto! Done.

Coins and currency came along and served as proxies for cows and other commodities. But still, you slid them across the counter and you got your stuff. Again, done.

Technology came along, though, and that’s when things started to grow ironic. One traded one’s toil and talents for a paper paycheck, deposited that check, but couldn’t draw on it for a given number of days until it cleared.

Or, from a merchant’s point of view, he or she traded goods and services to a customer with a credit card, but the transaction wouldn’t be completed until the monthly bill was printed up, mailed, received, and returned—with a check.

(Giving rise to that old saw, “The check is in the mail. Who will understand this reference in ancient sitcoms in ten years?)

The overriding factor in this admittedly simplistic but ironic sequence has been convenience. One couldn’t take one’s cows every time something needed to be bought. Coins and currency presented problems of authenticity, acquisition, and circulation.

Checks and plastic cards, when they worked, solved all those issues.

But they introduced delays in the payment process.

Folks want it all now

Fast forward to today and what do people not only want but demand? Both convenience and speed.

“In an era where consumers are accustomed to the convenience and immediacy of online services and mobile apps, the idea that payments take two or three days to settle is something that customers will not put up with for long, whether they’re individuals or businesses,” says a recent white paper from D+H. “Like streamed music or cameras on phones, immediate payments is something that consumers do not know they need until they get it.”

The implicit conclusion is: Now they need it.

That paper came out in March when D+H, in a separate announcement, announced that it will partner with The Clearing House to provide real-time payments. Specifically, financial institutions will be able to use D+H’s payments, core, and channel applications to access TCH’s ubiquitous real-time payment system in the United States. The idea is to emulate the company’s experience in providing similar services in the United Kingdom, Sweden, and Singapore.

Similarly, FIS in April announced it also will work with TCH on a pilot focusing on the bill-payment use case, uniting FIS’s technology and operations expertise with TCH’s real-time payments platform. This pilot will go live in the first quarter of 2017.

“True, real-time payments that clear and settle within seconds are right around the corner,” says Russ Waterhouse, executive vice-president, Product Development and Strategy at THC.

It’s worthwhile to note that D+H, FIS, and THC are members of the Federal Reserve’s Faster Payments Task Force Steering Committee, which has a total of 19 participants. All these participants are evaluating approaches for implementing real-time payments in the U.S.

From the ACH space …

NACHA, of course, has long been working on same-day ACH payments. It says that, as of April, 95% of the nation’s top financial institutions are on target to offer Same Day ACH beginning Sept. 23, 2016. Top of their list is to focus on same-day payroll payments and same-day B2B payments, in addition to services for expedited bill pay and P2P payments.

“Financial institutions see the value in providing new, faster payment options to their customers with certainty and surety, and Same Day ACH allows them to do that in 2016,” says Janet Estep, president and CEO of NACHA.

Of course, one can always take one’s bag of beans from one country to another. SWIFT just announced that 21 large banks have started the pilot for its global payments innovation initiative, intended to improve the customer experience in correspondent banking by increasing the speed, transparency, and predictability of cross-border payments. U.S. banks participating in this pilot are Bank of America Merrill Lynch, Bank of New York Mellon, Citi, JPMorgan Chase, and Wells Fargo.

The first phase of the pilot will focus on B2B payments, with these key features: same day use of funds, transparency and predictability of fees, end-to-end payments tracking, and transfer of rich payment information.

You and me at the point of sale

So much for the big money. What about the rest of us?

Briefly that can be roughly categorized two ways—time spent at the checkout counter, and the emergence of mobile wallets.

Mobile wallets would speed payments mainly through NFC technology. You simply wave a device of some sort that’s connected to some sort account—debit, credit, or gift, for example—and a device in a store almost instantaneously takes out enough to pay for whatever you purchase.

Forrester says 21% of U.S. consumers and 17% of European consumers would be interested in or already use mobile, or digital, wallets.

However, for banks, there is a problem, at least at the moment.

The top three wallets—PayPal, WeChat, and Alipay—are provided by nonbanks.

“Delivering contextually relevant services to customers’ fingertips, digital wallets will change how customers shop. However, digital wallets are, first and foremost, engagement platforms, relegating payments in the value chain. Banks run the risk of disintermediation and should not simply cede the customer relationship to mobile wallet providers,” Mercator says.

Javelin research shows banks already may have ceded at least some of that relationship advantage. While in 2014, one’s primary bank was deemed by consumers as the primary provider of mobile wallets, in 2015 PayPal and Visa surged to the top two spots.

“As the vast majority of financial institutions sat on the sidelines, consumer preference has shifted,” says Daniel Van Dyke, analyst, Mobile, at Javelin. He adds, though, banks still have “a perfect opportunity to stake a claim in this market.”

“The customer relationship is the trump card that issuers have to play in the mobile wallet game. Tapping into existing card functionality that your customers have come to expect quickly sets a higher bar for third-party wallet providers,” Van Dyke says.

Mercator Advisory Group also sees potential for someone to crack through this area, particularly as smartphone usage climbs up from what it already estimates to be 80-85% of U.S. mobile subscribers.

“The technology that is prerequisite for the use of Apple Pay, Android Pay, and Samsung Pay is not held by a majority of Americans on their current smartphone devices. This creates an opportunity for merchants and their partners to create and refine business-specific payment solutions that generate richer customer engagement interactions and consumer rewards,” says Joe Walent, senior analyst, Emerging Technology Advisory Service at Mercator.

[Editor’s note: Mind you, this is an interesting observation in the context of the previous Making Sense, which discussed American’s love affair with smart devices and the status of mobile banking. There’s a lot to make sense of, these days.]

All this attention to payments’ speed ironically circles back to trading that cow for that bag of beans—meaning, speeding things up at the counter.

People got used to swiping their magnetic stripes—but so did crooks. So EMV chip cards now are the rage to provide security, but there’s a problem. Where the swipe took about two seconds to cycle through, the dip can take 15-20 seconds, and that’s after the consumer figures out where to stick the card. That can mean pure agony when you’re waiting in line to order your Big Mac.

So, recently, both Visa and MasterCard introduced new software that merchants can program into their existing terminals—Visa Quick Chip for EMV, and MasterCard’s M/Chip Fast—that promise to cut the processing time back to about two seconds. [Read “MasterCard, Visa seek to speed EMV transactions"]

The general idea for both of these is that the customer is to dip his or her card before placing items to be scanned. The background technology makes the financial connections as the clerk checks each item. By the time that process is completed, and things are being bagged, the transaction is approved.

Watch out, Walmart’s at it too

How successful these things will be is yet to be determined, as merchants just recently have been informed of their availability. The need for speed at the counter, however, is widely recognized though. Just look at Walmart.

At the end of last year it introduced its own solution to speeding up the checkout line, called, predictably, Walmart Pay. Basically, a Walmart customer downloads a free app. When he or she goes to any register, the app is opened and the phone’s camera is activated. The customer scans a code displayed at the register. The clerk scans and bags the items—and that’s it. The customer gets an ereceipt.

That’s nice, but it’s only Walmart.

That’s a lot of cows, and a lot of bags of beans—delivered very, very quickly.

Real-Time Payments And Settlement Comes To The United States

FIS Is Working With The Clearing House To Create A First-Of-Its-Kind, Real-Time Payments System

Digital Wallets Threaten To Come Between Banks And Their Customers

Pay With Any Ios Or Android Smartphone, Any Major Payment Type And At Any Checkout Lane – All Through The Walmart App

More in this category: « Taking mobile seriously, but as what? Innovative bank can’t run on legacy tech »
back to top