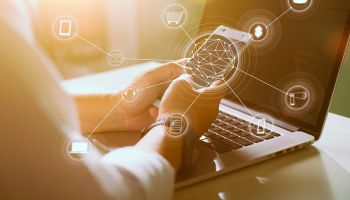 Who can figure out payments technologies these days?

Curmudgeons and outright geezers among us would likely wheeze on about how, in their day, that good old credit card with the $500 limit and the 19% interest rate was good enough for them. And by gum it should still be good enough for everybody now, they’d continue—even if each transaction had to be written up in ink on a multi-copy slip and manually run through—clack clack—a sliding mechanism on top of a counter.

Really. It keeps going on.

“Contextual commerce” back in vogue

The buzzword now—it appeared generally in late 2014, so it’s really not that new—is “contextual commerce.” The internet literature on this (talk about an oxymoron) generally peaked in late 2015 through early 2016, in terms of mentions, then paused for a bit. One starts to see an uptick in mentions this year.

Charles Keenan, writing in the TSYS Ngenuity Journal blog in February, says, “Retailers that embrace contextual commerce know the context of individual shoppers, anticipating their particular buying needs while providing easy, frictionless transactions.” Which is a pretty good description, if not definition, of what contextual commerce is.

An article sponsored by Braintree in the online journal Techcrunch talks about contextual commerce this way, quoting Robert Enderle of the Enderle Group: “You want to shorten the cycle between engagement and purchase. Anyone that can figure out how to make it so that you look at a product, say you want it and [instantaneously] have it, will probably own the market.”

As the title implies, TMG believes the answer to this is “yes” to prepaid cards.

More on this in a bit. But other technologies and trends also are making inroads in this area. These include: person-to-person payments, mobile wallets, social media, voice-activated ordering, and the various “realities”—virtual, augmented, and mixed.

Take P2P. Javelin Strategy and Research found that the U.S. P2P payment market in 2016 experienced almost $500 billion in P2P transactions from a bank, nonbank, or money transmitter service. More than one in three U.S. consumers in 2016 made a P2P payment either online or through a mobile device. Javelin predicts this will reach one in two U.S. consumers by 2021.

To achieve this, Javelin sees these catalysts in play: voice-driven P2P services, higher usage of in-app and proximity payments, and greater availability of P2P.

“As voice-based banking comes to market, consumers will expect voice-based payment support as well. PayPal has already announced integration with Apple’s Siri for voice-based payments. This merely demonstrates a single steppingstone in the rapid evolution of P2P services over the coming 12 to 24 months,” says Michael Moeser, director of payments, Javelin Strategy and Research.

Speaking of voice-based payments, Accenture surveyed nearly 10,000 consumers, a sizable chunk of whom are characterized as “Gen Z.” (Yes, that huge demographic coming on the heels of Gen Y, otherwise known as the millennials. These are aged 18-20, for the purpose of Accenture’s survey, since they could not survey people younger than that.)

In among many other findings, Accenture determined that 38% of Gen Zs are willing to try voice-activated ordering, while 25% said they can’t wait to use it, and 10% said they are already using it.

To segue back to that Techcrunch article mentioned above, the authors point to potential breakthroughs in speech recognition by China’s Baidu search engine, working at its laboratory in Silicon Valley.

In short, automatic speech recognition works in tandem with natural language understanding to allow machines to convert speech to text and then process the meaning of the captured phrases. Recently, Baidue claimed an accuracy rate of 81% of the time in noisy environments, compared with 65% claimed by Apple, Microsoft, and Google.

Speaking of social media (in the context of that Accenture survey mentioned above) 69% of the Gen Zs said they are interested in purchasing via social media—YouTube, Facebook, Instagram, and Snapchat—directly. Forty-four percent cite social media as a popular source for product inspiration and 37% have increased their use of social media for purchase decision-making.

Speaking of mobile wallets (really; it was mentioned at the beginning) Juniper Research predicts that global spending via mobile wallets is expected to rise by nearly 32% this year to $1.35 trillion.

While most of this spending occurs now in the Far East and China, due to Alipay and WeChat, “moves by key players such as PayPal and Apple to offer wallets which can be used both in-store and online means that wallets will increasingly become the default payment mechanism in other markets,” Juniper says.

Part of this, in turn, comes from such key disruptive developments as PayPal’s decision to introduce a host card emulation NFC solution to enable point-of-sale payments.

Back to real reality (really?! Well…)

Now let’s return to reality—of the virtual, augmented, and mixed kind. These are different but related things, but in general, they boost perceptions beyond what one normally senses.

(Even a slightly more detailed explanation of what these are borders on, well, unreality, so let it go.)

Just take one, for example. Virtual reality, what’s now being extensively advertised by people wearing goofy goggles into which they’ve placed smartphones and activated certain VR apps. The blog Techcrunch puts this into the payments context with this example: Last summer, at the Cannes Lions Festival, in France in real reality, a digital marketing agency working with Samsung Gear and Galaxy Note 4 smartphones guided participants through the buyable wares on display at a palatial apartment in New York, in virtual reality, created by a luxury boutique.

“It seems clear that with wider adoption, retail applications for the technology are forthcoming,” Techcrunch remarks.

Finally, back to prepaid cards in relation to contextual commerce and TMG’s white paper on the subject. It lists these factors that it says point to the likely future of prepaid as a widely accepted digital payment tool:

• Hesitation to enroll credit or debit cards in connected devices.

Today 50% of internet users say they are concerned about the amount of their personal information available online.

• Preferences for prepaid by millennials.

Several studies are mentioned that point to this generation as generally preferring prepaid cards, even as the Internet of Things begins to combine with the various “Pays” that accept prepaid (Apple Pay, Walmart Pay, Samsung Pay, etc.).

Add to these some other emerging features of prepaid, it says: no overdraft fees, better financial management, less risk of fraud-related loss, and an attractive option for young consumers.

Lest one think that TMG is alone in this, along comes a separate recent study by Javelin Strategy and Research, in which it “busts” various “myths” about prepaid cards.

Back to TMG: “The prepaid channel has evolved from a single-card payment solution to a multifaceted payment ecosystem providing consumers the convenience and flexibility they seek,” its report summarizes.

And our premise was …?

Who can really make sense out of payments technologies these days?

Generation Z To Switch The Majority Of Purchases To Retailers That Provide The Newest Digital Tools And Channels, Accenture Research Reveals

Mobile Wallet Spend To Rise By More Than 30% This Year, Reaching $1.35 Trillion

The Future Of Shopping Is All About Contextual Commerce

The Need For Contextual Commerce

More in this category: « Customers and banks: Why can’t they all get along? Everybody loves mobile but neglects safety »
back to top