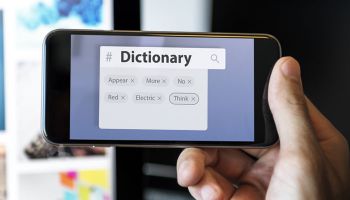 The terminology of financial services technology morphs as fast as the technology itself. Already, terms like big data, cloud services, biometric authentication, and more are so yesterday.

Yet bankers must keep up as new tech terms get invented and adopted. As fast as technology accelerates, people still have to master the language in order to attempt not only to understand what’s going on, but to figure out whether the new things are worthwhile.

What follows is our latest “Making Sense” compilation of terms that have appeared in the literature recently. They may or may not have traction in the new year. However, even if they don’t gain it, knowing about them now will enable people to achieve perspective about whatever even newer terms emerge.

One point that distinguishes this batch: This time they tend to describe new ways in which humans interact with technology. Think of how Siri has become part of our phones and Alexa and other such devices now sit on our mantles. As this tech phenomena becomes even more entrenched, applications will arise that bring with them new terms.

This list is roughly ordered from mostly human to mostly machine.

• Emotional engagement—Capgemini issued a new report in which it claims that emotions have the strongest impact for driving consumer loyalty.

“Consumers are immune to transaction-based loyalty programs of the past, so a retailer’s engagement with consumers needs to shift from being transactional to more emotional and meaningful,” says Kees Jacobs, consumer goods and retail lead at the company.

Continuing on that line, Jacobs says that “decoding human emotions will ensure that brands have a better understanding of their consumers leading to building deep-seated engagement and long-term loyalty with them. With a potential revenue boost of 5% up for grabs, and weak emotional connections ready to be exploited by the competition, no retailer can afford to ignore this reality.”

[On a personal note: My wife and I recently switched to a mail-order cat food provider, and we’re customers for life now. Not only is the cat food cheaper and delivered to our door, the company sends out periodic light-hearted emails using our cats’ names and asks for pictures of them. I suspect that such communications are generated through artificial intelligence algorithms, but the fact that I don’t really know makes that moot. It’s fun, convenient, and inexpensive.]

How does a company exploit emotional engagement? Capgemini lists these points:

• Reciprocation—Build a two-way relationship with customers.

• Recognition—Understand what consumers care about.

• Relationship pricing—This is somewhat related to the first term. An Oracle blogger, Akshaya Kapoor, applies this term specifically to banking.

“Relationship banking involves offering customers more favorable prices on a particular service because of the customer’s purchase of other solutions from the bank,” he says. “For example, a customer with a bank account might be given a more favorable mortgage rate.”

The key to being able to do this, he says, is to aggregate all the accounts of a given customer in order to have a complete picture. This is not a new term, per se, but measuring relationships in today’s data-driven business means much more than simple cross-selling ratios. Kapoor says:

“Banks have a huge amount of customer information—but they need to choose and use the right data so that they can run analytical models that will enable them to develop the right pricing strategies. Finally, they also need to use dynamic pricing and agile strategies that are aligned to critical customer events and milestones, such as buying a house or car or getting married.”

• Business process service delivery automation—This mouthful—abbreviating it as BPSDA still leaves it a mouthful—was posted recently by Everest Group in a report where it predicts up to $10 billion will be invested by 2019.

It loosely defines this as a mashup between robotic process automation and artificial intelligence, although that seems redundant.

He continues: “Contrary to general belief, our data shows that the penetration and scale per BPSDA deployment is still quite low. One of the challenges is the mismatch between buyers’ expectations and reality, partly due to some inaccurate communication from service providers and automation vendors.” [There’s that tech terminology issue in a nutshell.]

In any case, the report finds that the leading areas of BPSDA application are in finance and accounting, followed by banking and insurance.

• No-collar workforce—As another offshoot of artificial intelligence, Deloitte uses this term in its annual tech trends report. It’s placed in context of how human resources strategies will have to evolve to manage environments in which humans and machines work together as equals.

“The organization of the future must rewire talent management for the new hybrid human-machine workforce—simultaneously retraining augmented workers and pioneering new HR processes for managing virtual workers,” it says. [Emphasis by Deloitte.]

• Machine-to-people interactions—Along these lines, Mitel has used this phrase in a survey of IT decision-makers.

• Route information to the right individual across a while organization

• Or directly contact a customer when a threshold is triggered.

“Giving machines a voice in machine-to-people interactions can be a powerful differentiator as the relationship between businesses and consumers shifts from transactional to more experiential, and customer experience becomes just as important as the product or service a company provides,” says Wes Durow, chief marketing officer at Mitel.

• Intelligent automation—This is another seeming mashup of artificial intelligence applications, but has come to take on a subtler meaning.

Gartner defines it as “the umbrella term for a variety of strategies, skills, tools, and techniques that service providers are using to remove the need for labor, and increase the predictability and reliability of services while reducing the cost of delivery.”

For services such as service desks, intelligent automation tools can be up to 65% less expensive than offshore-based staff, Gartner says.

Gartner is not alone. KPMG, in a recent report says that “as companies digitally transform their business processes, cognitive capabilities are rapidly creating a new class of intelligent automation.”

“Today’s advances in robotics, machine learning, and other digital technology have the potential to help create a more intelligent enterprise and accelerate organizational performance—but key to realizing such benefits is the need to have an accepting and agile workforce strategy,” says Claudia Saran, KPMG’s U.S. People and Change leader.

• Quantum computing—And now for something really, really out there.

Quantum computing has been in research for 30 years or so and has yet to go mainstream—but it continues to hold tremendous promise.

Basically—and I mean really basically—quantum computing transcends classical computing, which depends on bits that have values of either one or zero. A quantum bit, called a “qubit,” can have many different values.

Theoretically, such a computer could solve many complicated computations simultaneously, vastly speeding things up. [Thanks for an informal explanation provided by Accenture.]

In fact, Accenture believes in this so much, it has invested in a Canadian company called 1QBit, and will collaborate with the company to test applications in the business world.

“Quantum computing is a turbocharger for analytics and the creation of new intelligence,” says Narendra Mulani, chief analytics officer, Accenture Analytics. “We see massive potential for using the 1QBit platform on behalf of our clients to pursue quantum-inspired analytics, which will help us unlock even more value trapped in their data and find new opportunities to transform their businesses.”

“IBM sees the next few years as the dawn of the commercial quantum era—a formative period when quantum computing technology and its early use cases develop rapidly,” says Dario Gil, vice-president of AI and IBM Q Network.

Notably, JPMorgan Chase was named as the premier global financial services partner with IBM, focusing on such use cases in the financial services area as trading strategies, portfolio optimization, asset pricing, and risk analysis.

Putting it all together…

Well, now... Conceivably, then, sometime next year there could be a story where the no-collar workforce uses quantum computing to facilitate machine-to-human interactions, fostering relationship pricing while embracing emotional engagement, all the while automating business process service delivery and ultimately making organizations intelligently automated.

More in this category: « Just over the tech horizon Technology trends shaping up for 2018 »
back to top