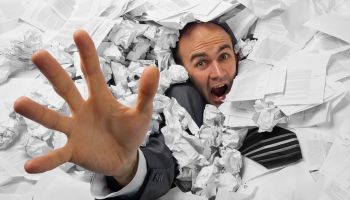 Last weekend, being a dutiful American with an eye on April 15, I booted up my new edition of Turbotax for my annual re-education in the difference between net and gross compensation.

Well, have you ever actually read that kind of thing?

I mean, really read it through, before you attest to having done so by clicking on the “yes” box? Have you ever taken the option to print it out for later reference?

As I clicked “yes”—and whether I actually read the text I’ll leave to you to infer—I recalled a conversation with a Texas banker whom I know during ABA’s recent Government Relations Summit.

We had just heard representatives of the Consumer Financial Protection Bureau update bankers on bureau projects during a morning breakout session. The banker was feeling philosophical about compliance disclosures.

“Does anyone read this stuff?” he said to me, gesturing towards the panelists. Turning back to me, he said, “I mean, when you go online and get a disclosure on a website, do you read it through before you OK it?”

Of course not, he answered himself.

The banker said he didn’t think consumers ever read the disclosures made to them, either. And those were getting longer and more numerous—and costlier to produce—with every reg and rule that CFPB touched, he suggested.

All this called to mind a short item I wrote some 33, 34 years ago for Banking Exchange. One of the big Chicago banks that no longer exists—might have been First Chicago, might have been Continental Illinois—had done an experiment with some commonly used disclosure that went on for pages. Of course, the customer was supposed to read all this word-for-word.

The bank had done something to make a point. Deep in the dense required text, but in bold type, it said something like, “If you’ve gotten this far, please call this toll-free number, and give your name. We will send you $50.”

As you might guess, the bank had few takers, and it put out a press release announcing how few checks it had cut to sharp-eyed consumers.

As the next thing to a practitioner, as a compliance/regulatory reporter and editor, when I’ve gone through a banking transaction, I do try to read things through. Can’t always get through it all.

But I’m not typical.

Last summer I handled the sale of my mother’s house, and the buyers, a family from overseas, were completely new to mortgage transactions in this country.

At one point during the protracted closing—I’ve heard New York State closings described as a semi-religious event, and they are—the buyer’s attorney told his clients that he was going to explain all the mortgage papers they were about to sign.

My attorney nudged me and whispered, “We don’t have to be here for this. Let’s take a break.”

It was a good 20-30 minutes before we got the high sign to return to the closing room.

The son of the family signed his final signature and suddenly looked dazed.

I couldn’t help but wonder how that family, new to the U.S., regarded all that paperwork. I suspect part of the new owner’s daze came from the compliance disclosures. If nothing else, the sheer bulk of documentation leaves one with the impression that one has signed up for something significant.

If that doesn’t do it, the property tax bill will.

I don’t deny the need for disclosures, and I am not so naïve to think that something involving a significant financial decision should be readable in five minutes, or even ten.

But it’s interesting that so many years later, when so much is being done and spent for consumers’ “good” that the question is still being asked, “Does anyone actually read this stuff?”

More in this category: « Real-life risk management: "Owning the risk," "tone at the top," and more The examiner, the banker, and the cold dead coyote »
back to top