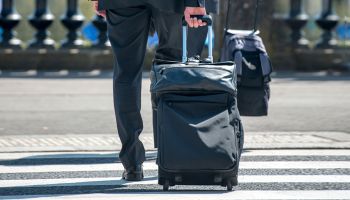 A few things about me. I don’t always work conventional hours, so I’m usually traveling in the dark after work. For decades I have generally carried everything I am currently working on with me, so I can work wherever I am. Nowadays that means a large laptop roller bag with an extra bag strapped on top, which is actually important for this story.

And I nearly always have a tie on, which bankers who have seen me at conferences for 35 years can attest to. A popular ABA lobbyist once accused me of even sleeping in my suit and tie. That was during a late-night fire drill at a community bankers meeting, and that’s another story. (No, I didn’t. I just grabbed the clothes I had set out for the morning, figuring to save at least one suit and tie in case the building burned.)

Anyway, the overall effect is something like the Executive Sherpa Guide.

There’s also this: I seem to have a sort of magnet in me.

Often that means people ask me for directions, even when I’m in towns I’ve never been in before. Sometimes, too, it’s a magnet that just attracts the loose human hardware that’s in the vicinity—if a weirdo picks someone out of a crowd of 100, it’s going to be me.

The other night, I had just gotten off my evening commuter train, strapped up my bags, and, for a change of pace, went down a street I don’t often use to reach the parking lot.

I saw McGinty’s Bar*, with a knot of people outside smoking between drinks. As I passed, dragging my Swiss Army roller with my non-matching green bag on top—the matching bag was way too small, you see—a woman in a sort of jogging suit stepped out of the small group.

Now, I am not the kind of guy women dream up pickup lines for, so I figured she must have really been having a long week—even though it was only Tuesday—and wanted to commiserate with someone.

“Yes, yes it has been,” I said. Still rolling. Trying to master the New York art of being a moving target, harder to hit. No dice this time.

“And hasn’t it been a really long year?” she continued.

Oh, I shouldn’t get into this, I said, as I stopped and put my bag into the rest position.

She stepped forward and shook my hand. Oh boy, I thought, here we go again.

“I’m too good at my job,” the woman said. “I’m brilliant at it. I’m in finance. But over the last few years, I’ve hurt so many people.”

“Yes, I’ve cost them a lot of money. I should get out of this business. I really should.”

Something popped into my head. I have seen some survivor guilt and some confused thinking post-recession.

“Let me guess?” I said. “Are you in the mortgage business?”

“You looked so executive, I figured you must have been someone like me, or maybe you’re a lawyer. You have enough papers there.”

Her eyes went wide, like someone who’s just poured out their life story to a priest who turns out to be an undercover cop.

I haven’t seen anyone broad jump five feet backward since my days in the Scouts.

She melted toward the bar door.

“Then this conversation never happened,” she said with the air of someone who’d just missed getting creamed by a bus, “and you’ve never met me.”

Next day I took the long way to the parking lot. I didn’t meet anyone.

* It’s not called McGinty’s. I just like that name for a bar, because it sounds like it came out of a noir film. I rarely drink, but if I did, it would be in a place with a name like McGinty’s. The rest of this story is true.

More in this category: « Disney’s digital playbook The junkman, the GSEs, and the wardrobe »
back to top