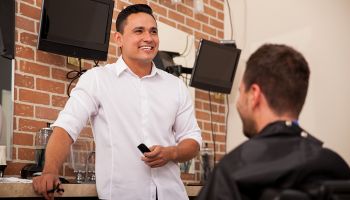 As a newly minted calling officer at The Bank of New York, I was frequently reminded by the more experienced lending officers that our own customers and prospects served as excellent sources of “field intelligence.”

By that term I mean the sort of information on what’s going on with an individual business and within the local business community. At my seniors’ urging, at a relatively young age I developed the habit of routinely asking my business contacts “How’s business?”

• That question, asked in an earnest and sincere way, compliments the listener.

• That question, answered with candor, becomes useful information to the banker.

Not everyone asked will answer with a useful response. But many will.

Open-ended questions invite additional questions and responses. Before you know it, you can be having a meaningful conversation with a participant in the local business economy.

Lots of heads are better than one

Several years ago my wife and I were wedding reception guests of one of my Oklahoma City customers at his son’s wedding in Dallas. We were seated at a table filled mostly by fellow out-of-towners. At the start of the reception, we didn’t know a soul around us. As these affairs often progress, pretty soon the conversation was lively.

I asked the middle-aged man sitting next to me, “What is your business?” followed inevitably with “How’s business?”

As it turned out, the fellow was the hairdresser used by both the bride and her mother. He evidently had a pretty upscale clientele, as before long I was treated to some very perceptive and insightful answers and examples. From the heads beneath his scissors, he kept his fingers on the local pulse:

• The restaurant business, he told me, was beginning to suffer from the effects of a local business decline.

• Merchants catering to the affluent were also reporting business contractions according to my “respondent.”

If I read the Dallas business news regularly, I might not have learned what I did in just a few minutes.

Too bad, I thought, that I’m not an active banker in this market. I’d put this man’s phone number in my book and give him a call from time to time. He was very forthcoming while at the same time not breaching any confidences or revealing any competitively sensitive information on his clients. If I lived in Dallas, maybe I’d encourage my wife to become one of his clients.

The things that barbers know

Several years later I was getting a haircut from my regular barber and I asked him the same question that I’ve asked him at every visit since I’ve known him. The responses are somewhat predictable in that as a participant in the local community, I don’t always hear anything I’d not been aware of before.

Every once in a while, though, I became the recipient of interesting and useful information that wouldn’t be in the newspaper.

One day I learned that one of my competitors, the president of a large independent bank, was ill. It was a legitimate health scare too and since my barber knew that he and I were acquainted, he shared this news with me. It was not “actionable” per se but it was useful in the sense that my friend and competitor whom I’d not seen lately would likely be distracted and less active in the immediate future.

Lessons learned in a job interview

Twenty-five years or so ago I was invited to interview for the CEO job at a mid-sized community bank in Missouri. As matters turned out, the job wasn’t a good fit, but the interview was enjoyable and interesting.

The bank’s chief marketing officer had previously been a marketing professor at the local university branch in that city. He and I talked during my weekend interview and I learned of his extensive network of information gathering.

The ex-professor was of the mind that just about any information could contain something competitively useful. That generated a lot of work in the recordkeeping sense but the intelligence capability was impressive. He shared what he found faithfully with the customer calling staff.

One recently learned tidbit shared with me was that examiners had been in the bank down the street for three weeks and that that bank was having a challenging time justifying some large real estate credits.

The bank’s lenders suspected as much. But the confirmation by the marketing department’s “web” added to the value of the insight. It suggested that the competitor bank might be forced to curtail its aggressive commercial real estate generating efforts.

That had possible implications for pricing, terms ,and availability from that particular community credit source.

Curiousity: basic to a lender’s “gut”

A simple “How’s business?” makes sense only if you and your colleagues have healthy curiosities. Without that the questions are unlikely to be asked with any consistency or persistency.

But when ongoing inquiry becomes part of how you do business, then such information gives both a possible competitive advantage as well as useful information on servicing credit already on the books.

It’s also fulfills the C of Credit known as “Conditions” and confirms that the bank does indeed know its customers. In reflecting on the credit cycle we’ve lived through the last few years, I cannot think of another environment in my working years where Conditions were more important to the successful administration and collection of loans.

But here’s the best reason for being well informed about how our customers are doing: It makes us credible.

We know what we’re talking about. We can be empathetic with customer issues and problems. We are a source of useful information—perhaps of a reassuring nature or perhaps disquieting nature—but either sort would be useful.

In my experience, I have found that if I share something really useful with my customers and prospects, they will remember where they heard it. That gives any of us credibility and it’s often the most important boost to our ultimate success.

And it gets the door open every time.

More in this category: « Concentrations beyond three dimensions Getting to the top »
back to top