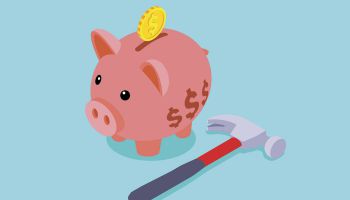 “The Dodd-Frank law, the Democrats’ legislative Godzilla, is crushing small and community banks and other lenders. … We support reinstating the Glass-Steagall Act of 1933, which prohibits commercial banks from engaging in high-risk investment.”—from the Republican platform

Here’s an idea that should appeal to politicians and bankers alike. Let Congress fully reinstate the Glass-Steagall Act and totally repeal the Dodd-Frank Wall Street Reform and Consumer Protection Act.

Why not? Wasn’t the purpose of Dodd-Frank to eliminate the risks in banking that were allowed to enter the banking landscape following passage of Gramm-Leach-Bliley Act (aka Financial Services Modernization Act of 1999)?

Well, not so fast.

Why it wouldn’t work

Unfortunately, as “elegant” a solution as this seems to be to the burden of over-regulation of banks, it’s wide of the mark in terms of what’s politically possible. Several reasons stand in the way.

• First, one of the main features of the Dodd-Frank legislation is the Consumer Financial Protection Bureau.

This was an idea initially championed by Senator Elizabeth Warren (D.-Mass.) following her work as chair of the TARP Congressional Oversight Panel and as senior advisor to the National Bankruptcy Review Commission. The genesis of the idea and her strongly felt convictions are set out in her 2014 book, A Fighting Chance.

• Second, there is no consensus (and apparently there never was) about the impact of Glass-Steagall back when it first went into effect.

It is somewhat of a mystery, at least to me, why Glass-Steagall issues figured so prominently in the discussions leading to the enactment of Dodd-Frank Act in 2010.

• Third, and probably most importantly, banking is an evolving business enterprise.

Our industry has grown to include so much more than accepting deposits and making loans.

At the same time, the very activities of deposit taking and lending are conducted by a vast array of business enterprises not considered under the umbrella of “banking” and not similarly regulated in a large number of environments.

It’s been 87 years since the stock market collapse that began on Oct. 29, 1929, ushered in the Great Depression. That’s a very long time for any business activity and the world has not been static in any way—politically, socially, technologically, or competitively in those intervening years.

Looking at the roots

We don’t live in the same financial world that Americans did when Glass-Steagall, in full, was the law of the land.

My interest in this matter dates from my graduate school days in the 1960s. One prominent banking professor was adamant on the subject. He maintained with considerable vigor that the so-called abuses pre-Glass-Steagall were minor in nature and not so widespread as requiring the legislative response that is we now commonly refer to as Glass-Steagall. The act as passed in 1933 did many other things, including authorizing the establishment of FDIC. Many other facets also continue today.

I find the history of bank regulation to be a fascinating subject and one far too long and complicated to be addressed here in any satisfactory fashion.

But there is one common thread to all banking regulation and it is this: A sound banking system is essential to our national interest and economic prosperity.

So, banking regulation is—and always has been—a permanent part of the banking business landscape. That will not change, though the way we conduct what we call the business of banking is evolving on almost a daily basis.

Glass-Steagall separated commercial banking, the activity historically associated with the accepting of deposits and the making of loans, from investment banking, the business of raising funds by the underwriting and issuance of stocks and bonds for large, publicly traded companies.

Separation of the two was always a good idea, even if lack of separation wasn’t a principal contributor to the Depression of the 1930s or the risk-taking associated with the banks and the Great Recession that began in 2008.

The issue has always been viewed in the form of a question: What should be the permissible activities of commercial banking?

That answer continues to evolve but the constant concern is the degree of risk entailed by the performance of these activities.

The sorts of public discussions associated with the passage of Dodd-Frank would seem almost alien to commercial bankers who reached their business maturity in the 1920s. Banking had become a very different sort of business by 2010 and so the risks addressed—and the manner in which they have been addressed—are essentially very different.

Sanford Weil, the now-retired chairman and CEO of Citigroup, is considered the spiritual father of the modern-day vision of large financial institutions performing an enormous array of related business and financial services. He saw great value in the combination of insurance companies and banking companies, both industries selling similar financial services to businesses and individuals.

Weil’s principal vision was recognizing the potential of “data mining” of the marketing information amassed by banks and insurers on their customers. The idea was that the combined entities could leverage on each other’s strengths to market financial services on a huge scale.

Also included in the Weil model was the notion of creating new and integrated financial products delivered and enabled by technology on a truly grand scale.

The old Glass-Steagall Act as originally passed was the single biggest obstacle to that vision. Although it took five years, Weil successfully merged Travelers Insurance and Citicorp into Citigroup subject to an enabling change in the law. That enabling legislation was the Gramm-Leach-Bliley Act. But during this time interval, consumers began to sense the encroachment of intrusive corporate goliaths into matters commonly considered today as “consumer privacy.”

This was the ultimate undoing of the business model that was enabled by the new legislation. The model in fact had become obsolete in the many months before it had become legal.

So now, by 2016, we have lived through years of Gramm-Leach-Bliley and now are living with Dodd-Frank and its frequently one-size-fits-all model of bank regulation.

Indeed, the bureau is the wild card. I urgently suggest that all who are seriously interested in a constructive revamp of banking regulation understand the purposes of the CFPB.

I’d start by reading Senator Warren’s A Fighting Chance. You might come away with a different and more constructive appreciation of the objectives of the bureau. It may not be constituted the way we would like but we should all begin with a common question: Does CFPB serve a valid purpose?

And a ruthlessly honest response to that requires an understanding of the reputation risk that’s been overhanging our industry for several years. Until we understand and effectively address that, we’re wasting everyone’s time and patience and just digging our own hole deeper.

It’s time to get on the same page and address the real issues that so far we seem unable or unwilling to do.

More in this category: « Do we believe in our internal controls? How community fundraising dovetails with banking »
back to top