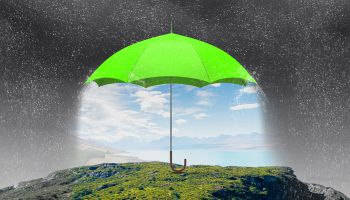 As a lender who has spent a lot of time in the workout trenches, I’m often asked my opinion on the state of the credit cycle. People ask about what vulnerabilities I see in the current credit environment.

It’s a timely question. Since the surprise election (to me, at least) of President Donald Trump last November, there has been a palpable sense of optimism in the national business outlook and for banks in particular.

The anticipated scenario contemplates significantly improved business conditions; a strong appetite for increased borrowings by CEOs encouraged by the intermediate-term business outlook; and a disposition in a Republican-dominated Congress for a relaxation of some of the more oppressive bank regulations.

This has been coupled with the expectation of likely tax reform, significant tax cuts, a gradual return to a normal yield curve, and a general optimism that has not been widely shared since before the Great Recession that began in 2007. These are all things that banks have been hoping to see for years.

But there is coming to be a “on the other hand” factor.

My standard answer to questions of “What should we be doing now?” is to emphasize the basics: the Cs of Credit.

That’s advice that never grows dated nor will it ever get anyone into trouble.

But there’s a background to this, and some additional efforts to implement.

Clouds on the horizon

The recent evidence of resurgence in partisan gridlock relating to health care reform and more recently the firing of the FBI Director has in my mind clouded the outlook for the optimistic business and credit environment that was the norm just a few weeks ago.

Is tax reform going to be as “easy” as hoped?

Will we see meaningful reform?

Will our economy experience a growth spurt?

Or are we facing conditions that could spawn a return of “stagflation?”

How many of us remember the terrible environment of the late 1970s? Inflation was rampant and bankers almost universally would describe their outlook for business in a single word: lousy.

Could that condition recur? Are interest rates already poised to contribute to that sort of an outcome?

Of course I’ve got no crystal ball. But I am feeling a chill in the air.

Maybe the short- to intermediate-term economic outlook isn’t as attractive as we so recently imagined. And most of us would agree that the political atmosphere has very recently turned nastier than usual.

What should bankers be doing now?

So, credit managers and lenders should emphasize the basics. But are there more things that we can and should be doing to protect our banks from a reversal of economic and business sentiment? How serious might such a reversal be?

Sometimes our customers think of us as bi-polar.

Actually, I think that this combination of attitudes serves us very well. We are local cheerleaders for our customers, our banks, and our communities.

The question we must deal with now—and urgently—is, are we are facing some extraordinary headwinds? What could go wrong that would wreak havoc? And what kind of havoc might we be talking about?

I guess I’m most concerned about a collapse in business confidence.

This could send the Dow and the S&P tumbling and set business leadership in the country back on its heels in terms of basic attitudes on investment. That could translate into a significant softening of loan demand—or worse—over time.

The profligacy of our government going back several administrations produced a national debt of unprecedented peacetime proportions. Any interruptions in overall business sentiment, coupled with concern about good fiscal stewardship by our government on the part of holders and buyers of our debt could produce substantial repercussions.

I’m not saying that any of these things are likely. But suddenly, the prisms in my glasses are causing me to see a different and less optimistic potential. What might that mean?

7 steps your bank should take now

In addition to a continuous (and renewed, if necessary) emphasis on the basics, what might we consider doing?

Here’s my short list of things I’d do if I owned or managed any large community or regional bank today:

1. Good credit people. Hire the best talent available to fill any current or anticipated lending vacancies. Find and recruit the best you can. Pay up for them if you need to.

2. Clean house. Review your staffs and prune the underperformers. Encourage early retirements where and if appropriate.

3. Nudge substandards toward the door. Get tougher on the marginal credits. Encourage them to find new banking homes—while they still can.

4. Review your concentrations of credit. Act immediately on any concerns you’ve got, rather than simply making mental notes on lists of things you’d like to do.

Be proactive now, rather than later. Taking action when you absolutely have to isn’t being proactive.

6. Tweak your workout blueprints. Tighten up the workout plans on your criticized loans. Shorten the time lines and increase the performance thresholds where you can—and quickly.

7. Rediscover your gimlet eye. Take a sharp pencil to all loans that are up for renewal or renegotiation. Don’t assume that business conditions for their remaining terms will necessarily be to your liking. Pay particular attention to the “Capacity” C of Credit.

No, I don’t think the sky is falling. But compared to a few months ago, I think that caution and being proactive is appropriate where I’d not necessarily thought that before.

I personally hope for the best.

But good fortune usually follows those who make their own good luck.

Now may be such a time to figure out what that really means.

More in this category: « Balancing fintech and credit quality Lenders: Will you have a job when M&A rolls? »
back to top