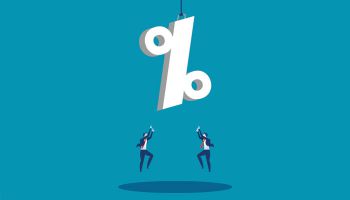 The Fed’s move last week to nudge interest rates higher by a quarter of a point surprised no one. There is, however, only a fragile consensus over the “right” level of rates, and it’s the bankers and politicians showing the greatest interest in the outcome of the discussions.

And their interests are not necessarily aligned.

Bankers and politicians are often—and naturally—adversarial about rates. Politicians want low rates (that please the “masses”) while bankers want rates reflective of a non-inflationary level of business activity and, more recently, relief from the crushingly narrow net interest margins characteristic of recent years.

Tone of debate has changed

But what’s crept into the dialogue, dating from the presidential election campaign to the present, is rhetoric tending to challenge the political independence of the Federal Reserve. With the politicians in charge, we’d be less likely to see higher rates. So a significant underpinning of sound and sustainable monetary policy is at risk with any loss of Fed independence.

No stretch of the imagination is needed to contemplate market rates of interest in the relatively near term that could double the Treasury’s annual cost of servicing the interest on the national debt.

Serious talk of reducing spending or reforming certain entitlements would have been appropriate in recent months in the context of the currently anticipated tax cuts. But there was very little discussion on this urgent topic.

Few of us remain alive who remember the “1951 Accord.” This is the name given to the decision of the Federal Reserve and the U.S. Treasury to end the cooperative agreement entered into during World War II to maintain short-term interest rates at a managed low rate. The intent had been to moderate the cost of servicing the federal debt. The accord meant that the Fed would no longer conduct monetary policy with the primary objective of maintaining low interest rates.

What I think some are seeing today is the possible capture of the Federal Reserve by the Treasury in the management of the federal debt.

A return of interest rates to levels existing during the latter phases of the last economic cycle give some guidance on what the course of rates might be.

Could the Federal Reserve feel constrained to lift rates to levels that would curb inflationary pressures due to political concerns about its independence? Or due to the potentially disruptive impact of the costs of servicing the debt?

While we haven’t yet dodged the periodic bullet of increasing the “cap” on the size of the debt, the likelihood of a government shutdown is believed to be low at least for the looming budget deadline in the next several days. But what about later in 2018 and into 2019?

What bankers have to be looking for today are the potential disruptors of the confidence that has been engendered by a steadily improving business outlook and the positive results expected from tax reform and reductions, especially in corporate rates of taxation.

A lender’s eye on these challenges

But as credit people, we are conditioned to look for the down-side of situations so that we can otherwise build in safeguards and buffers should our anticipations not come to pass.

• The federal deficit will continue to grow according to virtually everyone’s forecasts. While serious observers recognize that unchecked growth is unsustainable, where do we draw the line? At what point does “high” become “too high?”

• What rate will the market (especially foreign buyers) demand to continue to acquire and hold our debt?

• The present business expansion is the third longest since the end of World War II. Economic cycles have economic “lives.” This one is getting long in the tooth.

• Our national political environment is extremely brittle. Consensus on any needed corrective actions of a monetary or fiscal nature will be very difficult should something completely unforeseen occur.

• How liquid is our monetary system? Liquidity in the system appears abundant, if not excessive. The real question as we learned (again) in the Great Recession is how much of our supposed liquidity is “runnable.”

These are tough thoughts to absorb at Christmas time, a time of hope rather than perversity and turmoil.

But the significance of Christmas transcends the mundane of everyday life. We’ll figure it out, somehow, if our near term hopes and plans unravel.

In that way, nothing much is new or different. Merry Christmas.

More in this category: « Maintaining a civil workplace Is “Character” the most important “C” of credit? »
back to top