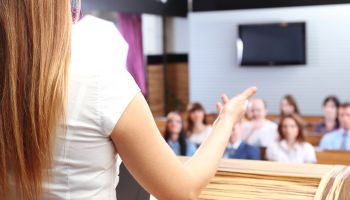 If you’ve ever presented to your bank’s board, you know what that first time can be like. Your pulse quickens. Your mouth may go dry. Then you plunge ahead.

Making a ten-minute presentation to the bank’s board is just one requirement that Biddeford Savings Bank demands of the bankers selected for its home-grown Officer Development Program.

“In all of what we’re doing here,” says Charles Petersen, president and CEO of the $375 million-assets bank, “they get pushed out of their comfort zones.” And that’s quite by design, from the very beginning of the program’s application process.

When the bank launched this program, new this year, 20 potential candidates were identified. After hearing a presentation about management’s intent, 13 bankers applied for consideration for seven slots. Each was grilled for 90 minutes by the bank’s current leadership team.

In time, the seven finalists would gain a mentor among those leaders. But the task in those meetings was to press the candidates, to see who should make up the inaugural class.

“It is especially challenging for smaller banks, like ours, to develop our next generation of leaders,” says Petersen.

But Petersen saw the urgency of getting the job done. In about six years he and other members of the bank’s senior staff will be retiring. The bank wants to promote the next generation of leaders from within. Petersen says the one-year program is halfway through and he is pleased with what he’s seen so far.

Looking around the bank, Petersen began to realize that generation turnover was coming. The bank had already gone through some adjustment in hiring practice as the banking industry changed.

“Six years ago,” before he arrived at the bank, says Petersen, “if we were hiring a teller, we’d hire someone who had already been a teller. Now we hire for culture, for personality fit. And then we teach them to be a teller.”

But Petersen felt more was needed. As he explains it, when an organization, especially a mutual bank like Biddeford, gets to a certain age, culture and people can get a bit set in their ways.

Biddeford is verging on 150 years old, and Petersen wanted to shake things up a bit in the course of training leaders. He wanted to encourage employees to manage their careers. One of Biddeford Saving’s standards is to be an employer of choice, he said. But that is a two-way street.

Instead of just serving time and hoping to move up, Petersen wanted to encourage people “to be more proactive about ‘what they want to be when they grow up,’ for a lack of a better term.”

He brought all his thinking to the board and obtained approval to develop an internal leadership program. Then Petersen and his HR chief put their heads together, and came up with a blended program that combines outside expertise with internal development efforts.

What the pair came up with mixes formal training; exposure to other parts of the bank and management-level tasks; a cooperative stretch assignment; mentoring; and tasks like the board presentation mentioned earlier. The finalists taking part in the first class range in age from the late 30s to early 50s.

• Formal evaluation: The face-to-face grilling was done to qualify for the program, but once in, candidates were assisted to see what their skills are and how they are perceived. This entailed both a “360” evaluation and personality type evaluations, including a Myers-Briggs test.

Priority Learning’s role includes providing two training courses, which are presented to the bank’s seven participants, as well as employees of other companies, in small groups. The firm also runs some diagnostics of its own on the leadership students. While no formal grading occurs, Petersen says the bank’s partner keeps them up to date on students’ progress in the leadership training.

• Mentoring: Each participant has a senior management mentor, and halfway through the mentors rotate their assignments. Petersen notes that he does not take part in the mentoring because management wished to avoid any misunderstandings regarding who was being mentored by the CEO.

• ALCO indoctrination: The training includes a meeting with the bank’s asset-liability consultant, to help the students learn how this function works, and how various aspects of the bank interplay with each other.

“We’re trying to expose them to aspects of the bank beyond their day-to-day duties,” says Petersen, “to help them towards bigger-picture thinking.”

• Special task: The entire seven-banker group has been assigned a joint project for the year. They are now the bank’s Community Reinvestment Act Committee, and have been tasked to improve the bank’s approach to these responsibilities.

Looking ahead and around

Once the program has completed its inaugural one-year run, Petersen and his staff intend to review it both to see how they can tinker with it and how they can create a similar program for younger employees, such as those in their 20s.

Petersen says the bank believes it is spending about $10,000, all told, per participant, not counting the costs of company time spent in training and other program-related functions.

Not cheap, but not outlandish, and essential for smaller banks’ survival, Petersen says.

“I would hate to see smaller bank executives say, ‘We can’t do this kind of thing.’ You can,” say Petersen. “You just need a little creativity, support of your board, and a good partner.”