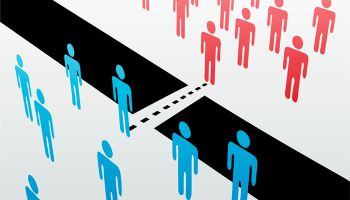 Mergers of equals are relatively rare in the banking industry. Combining executive ranks and boards alone can prove a thorny process that many companies would rather avoid. Egos get in the way. The broader cultural challenges involved in bringing together two banks of similar size only compound matters.

"Which culture will survive? That can be a tough thing to deal with when they both come into it as equal," Rick Weiss, managing director at Ambassador Financial Group, said in an interview. "Even when they are alike, they are not exactly the same, and so there can be challenges there."

Of 280 bank and thrift M&A deals announced in the U.S. last year, only nine were considered MOEs by S&P Global Market Intelligence. Of 166 deals so far this year, seven have received the MOE tag.

But a pair of banking companies in Pennsylvania this week made what they believe is a strong case for such a marriage, saying lenders are operating in uniquely challenging times, and pacts that many may have shied away from now present coveted value. They say the financial merits of their MOE are strong and the immediate boost in scale that the community lenders will gain at a time when heft is increasingly important—each will essentially double in size—make the special hurdles of such a deal worth clearing.

"I do think MOEs are harder to do," Standard Financial Corp. President and CEO Timothy Zimmerman said in an interview after Monroeville, Pa.-based Standard ($484.7 million in assets) confirmed Aug. 29 that it inked a deal with Pittsburgh-based Allegheny Valley Bancorp Inc. ($435.0 million) to merge.

Although Standard is technically the buyer for accounting purposes, Zimmerman said the deal was in most every other way designed as a genuine MOE.

The combined holding company will be known as Standard AVB Financial Corp., with Zimmerman becoming CEO and Allegheny Valley President and CEO Andrew Hasley serving as president. Six existing Allegheny directors will become Standard Financial directors on a 13-member board.

Zimmerman said the two companies' staffs will combine and the vast majority of each company's branches will remain open. While there will be expense reductions, cuts will not run deep. Zimmerman said the companies are looking to trim expenses by around 15% through back-office reductions and the elimination of other redundancies. But that is roughly half of what many buyers aim for when absorbing a target.

Cost cuts will help but big benefits of the deal will also come with the scale each gains. The combined bank will have nearly $1 billion in assets, a size at which it will have a much larger base over which to spread out the lofty compliance costs that have been heaped upon banks in the years since the 2010 Dodd-Frank financial reform legislation, executives said.

"The government has just made it so hard to do business," Zimmerman said. "You need that size."

What is more, Allegheny's Hasley said in an interview, the two companies are expected to complement each other in ways that should immediately drive sales growth. Allegheny brings to the table a strong commercial operation, he said, while Standard brings a robust retail business. When they come together, he said, each side will have tremendous cross-selling opportunities that should bolster overall EPS accretion.

The two companies declined to lay out a precise accretion target, but Hasley said executives are looking for a percentage increase in the low teens in the first full year after the deal closes in the first quarter of 2017.

Both Zimmerman and Hasley said they will gain the size each needs and boost earnings notably faster with the MOE than either could doing smaller acquisitions. They both said their companies have looked, but in their part of the country appealing targets have sold through bidding processes, and winning bids have been higher than what either has found attractive. Such deals would have proven too dilutive to shareholders.

So the challenge now, they agree, is working together as a leadership duo to seamlessly bring together their similarly sized staffs in a way that enables them to pull the best attributes from each without conflict slowing them down.

Hasley said the key is to have clearly communicated goals and to approach the process with everyone knowing that the objective is to ferret out "best in breed" practices and products from each side to create an even better company, as opposed to one culture overtaking the other.

Zimmerman agreed. "You have to be flexible and be willing to listen to the other side," he said. "We are going to do that."

Kevin Dobbs is a senior reporter and columnist. The views and opinions expressed in this piece represent those of the author or his sources and not necessarily those of S&P Global Market Intelligence. Reizle Platitas contributed to this article.

This article originally appeared on SNL Financial’s website under the title, "In Greater Pittsburgh, the case for a merger of equals."