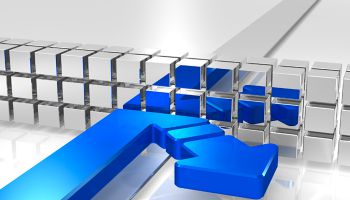 Bank stocks took considerable hits early this year, largely due to macroeconomic concerns. As oil prices headed lower, fears that a global economic slowdown could lead to a U.S. recession weighed on the market. Some investors also grew concerned that the credit cycle could be turning.

The SNL Bank & Thrift Index fell as low as 134% of tangible book value in early February but has bounced back since then, rising to roughly 149%. They are still below the levels witnessed at year-end 2015, when the bank group traded at nearly 165% of tangible book value, down slightly from 175% at the close of 2014.

While the bank group has rebounded from the lows in February, the markets have remained fairly volatile. Swings in the market have often stemmed from global events like Brexit and other developments that changed the outlook for interest rates.

The prospect of rate hikes has often led to sell offs in bank stocks, despite many investors arguing that higher rates will offer relief to depressed net interest margins. 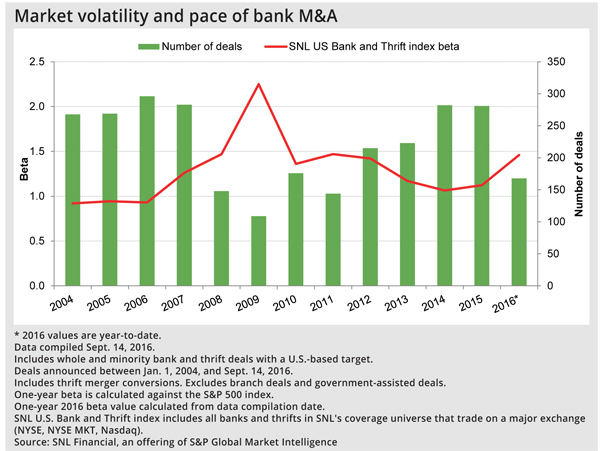 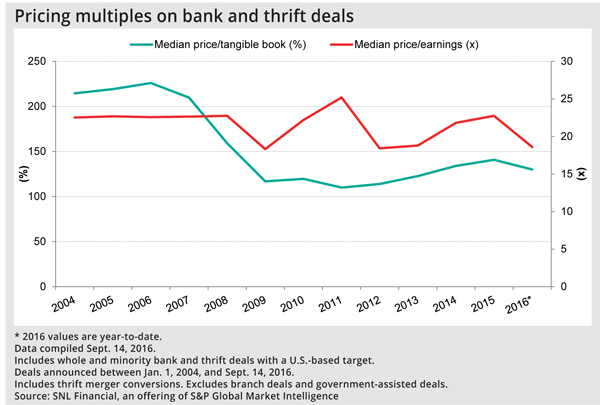 As the outlook for rates remains uncertain, so does the forecast for M&A activity. Bank advisers presenting in late September at the 8th annual M&A Symposium hosted by S&P Global Market Intelligence said they do not expect a significant pickup in deals as the pool of buyers could be shrinking while seller expectations remain fairly high.

Big bank deals scare and to remain so

While 2016 has brought several large deals, those transactions are unlikely to pick up any time soon. Sullivan & Cromwell LLP Senior Chairman H. Rodgin Cohen said at the M&A Symposium that the nation's largest banks remain on the "no buy" list by regulators, keeping the pool of buyers equipped for sizable deals to a minimum.

The vast majority of transactions have involved smaller institutions, and that seems unlikely to change soon. There might even be fewer institutions looking to acquire smaller banks since those deals often do not move the needle that much and could prove more trouble than they are worth for some would-be buyers.

Rory McKinney, managing director and co-head of investment banking at D.A. Davidson, said at the M&A Symposium that the buyer landscape represents the biggest threat to bank M&A today, as the universe of potential acquirers of small banks is shrinking. 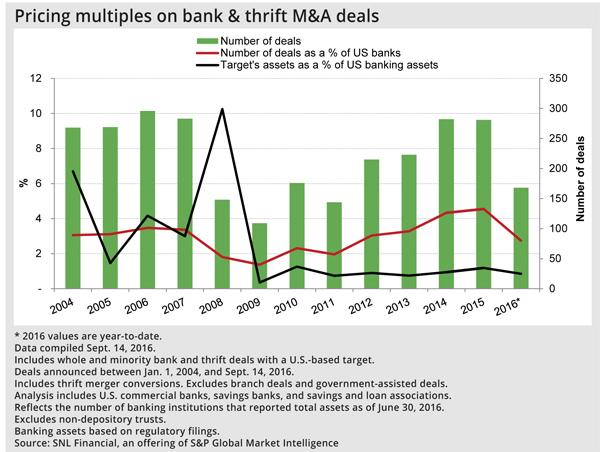 Banks that have held off on selling for some time with hopes of fetching higher prices in the future could find themselves disappointed. C.K. Lee, a managing director in the financial institutions group at Commerce Street Capital, encouraged banks to have a sales strategy in place so they can strike the iron while it is hot.

"I think there is a backlog of deals that needs to be cleared and I think it's going to have an impact downward on pricing. A lot of these folks' expectations are unreasonable and I think they're going to get an education," Lee said at the M&A Symposium. 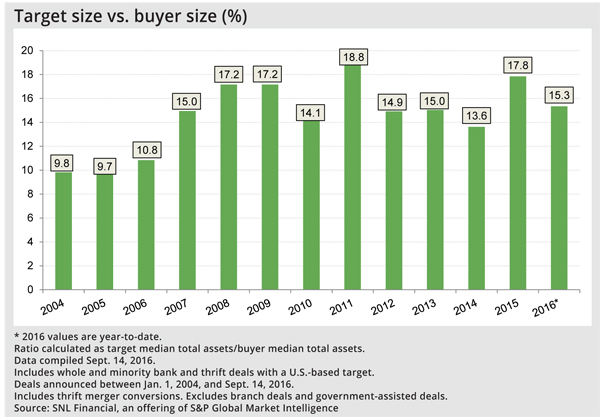 This article originally appeared on S&P Global Market Intelligence’s website under the title, "Bank M&A falls in ’16, a rebound in question"