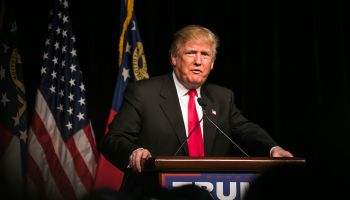 Banks and thrifts have been taking advantage of increased investor interest in the space by executing follow-on common equity offerings, and investment bankers believe initial public offerings in the sector are on the horizon.

Bank stocks surged in wake of the Nov. 8 U.S. elections with the KBW Nasdaq Bank Index increasing 21.88% through Dec. 14 compared to a 5.31% rise in the S&P 500 Index, and investors have also backed an increase in equity issuances from the sector.

In the five weeks since the election, depositories in the U.S. and Puerto Rico executed 20 common equity offerings to raise a gross amount of $1.98 billion, which is more than banks and thrifts had raised in any one of the first three quarters of 2016, according to S&P Global Market Intelligence data through Dec. 14. [S&P Global Market Intelligence originally posted this article on Dec. 15.]

But Keefe Bruyette & Woods Inc. President and CEO Thomas Michaud said investor sentiment toward the space has changed in a material way since the U.S. presidential election of Donald Trump. Michaud said investors are now hopeful that the industry will benefit from higher interest rates, regulatory relief and tax reform.

"These can all have a meaningful improvement in profitability," Michaud said.

Michaud said he expects banks to continue accessing the capital markets and added that investors have been supportive of the equity deals. He noted that KBW led an IBERIABANK Corp. offering in which the issuer initially hoped to raise about $200 million but ended up generating $292.9 million. 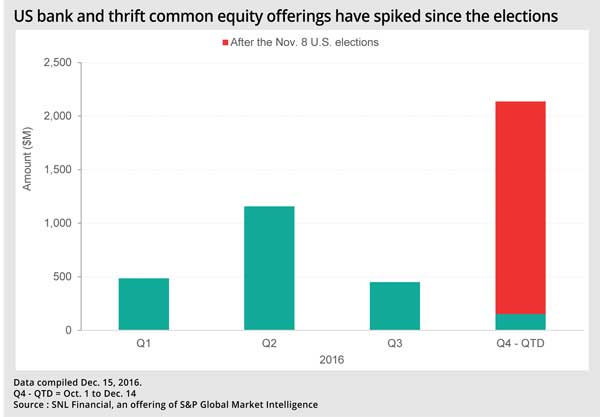 In SEC filings, IBERIABANK and most of the other banks that have raised common equity since the election said they could use proceeds from the deals for offensive reasons, such as funding organic growth or acquisitions. However, the market has also provided liquidity for some investors.

While banks have been more active with follow-on deals, IPOs have remained sparse. There has been some fourth-quarter activity in the mutual conversion space, but for non-mutual bank IPOs, the most recent completion came Sept. 21 with CapStar Financial Holdings Inc.'s deal.

In general, IPOs have been slower in 2016 across all sectors, and banks and thrifts have not been immune to the slowdown. The sector saw 12 IPOs raise $598.4 million while 2015 saw 17 deals raise $1.81 billion in all of 2015, according to S&P Global Market Intelligence data through Dec. 14.

But Michaud and others such as Commerce Street Capital LLC President and CEO Dory Wiley expect IPOs in the bank space to accelerate in 2017. Wiley said with the improved market conditions, more banks have started planning for an IPO. He said he is aware of about six banks in the Southwest alone that are interviewing investment bankers who could help execute an IPO.

However, Wiley said most of the banks won't likely come to market with an IPO until the springtime in 2017 because it takes time to complete the IPO process. In many cases the process is just starting because few were expecting Trump to win the presidential election, and even fewer were expecting that a Trump win would help create such a boost for bank stocks, Wiley said.

"That kind of caught everybody off guard," he said.

Wiley added that since the election it's been much easier to receive commitments from investors. He said Commerce Street spent about five months working on a $60 million private placement for a private bank, but in the months before the election, the bank received only about $5 million to $10 million in commitments. But about one month after the election, the full goal had been raised, Wiley said.

He added that the increased interest in private placements is a good sign for IPOs because similar investors take part in both types of deals. But for now, the most visible part of the capital markets activity is in the follow-on offerings, and Ajay Asija, a managing director in FBR & Co.'s financial institutions group, said he expects more depositories to take advantage of the opportunity to sell stock at the recently increased share prices.

"If you have a need for capital three or six months down the road, it might make sense to raise it now," he said.