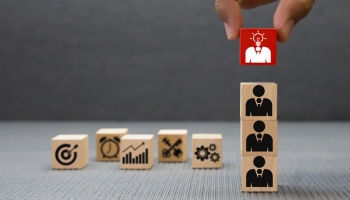 Chairman and CEO Scott McComb – who was Heartland’s president prior to Mauntel’s appointment in April 2019 – will resume president responsibilities. He has been with the Ohio-based bank for over 21 years.

Provident Bank – The New Jersey-based group has made several leadership appointments following the completion of its merger with SB One Bank.

Wells Fargo – Mark Chancy has been elected to the company’s board of directors. He was most recently vice chairman and co-chief operating officer at SunTrust Banks where he led the group’s consumer segment until his retirement in December 2019.

During an 18-year tenure with SunTrust, he also led the group’s wholesale banking arm and served as CFO from 2004 to 2011. He was previously CFO of The Robinson-Humphrey Company, which was purchased by SunTrust in 2001.

The appointment follows that of Steven Black, co-CEO of private equity firm Bregal Investments, who joined the board in April. Previous board members James Quigley and chair Elizabeth Duke resigned on March 8.

Gateway First Bank – Scott Gesell has been appointed chief executive officer and general counsel. He has been interim CEO since April, and was previously chief administrative officer.

Don Powell, lead director on Gateway First Bank’s board, said: “The calm and steady leadership he has provided during these unprecedented chaotic times has been a defining moment between good and great governance.”

Mercantile Bank Corporation – The Michigan-based banking group has appointed new directors to its board and that of its wholly owned banking subsidiary, Mercantile Bank.

Ramaker  and Shoran Reid Williams, senior counsel for Miller Johnson, have been appointed to Mercantile Bank’s board.

As CEO of Chemical Financial Corporation, Ramaker oversaw the company’s growth from $3 billion to $18 billion in total assets until his departure in 2017.

Davenport previously held a variety of positions at major financial institutions including US Bank, Fifth Third Bank and First Financial Bank. He has been a member of Mercantile Bank’s board since 2017.

Williams is senior counsel for Michigan law firm Miller Johnson Attorneys, and has served as an adjunct professor at Florida Coastal School of Law.

Ameris Bank – The Georgia-based bank has promoted Karlene Gordon to be its diversity and inclusion officer. She will be responsible for developing and implementing plans to “foster, cultivate and preserve diversity, inclusion and equal dignity”, Ameris said.

Gordon was previously the bank’s senior human resources business partner, a role she has reld since joining the bank in 2018. Previously she held a variety of HR roles supporting the Rockefeller Brothers Fund, Live Person and HR Dynamics, among others.