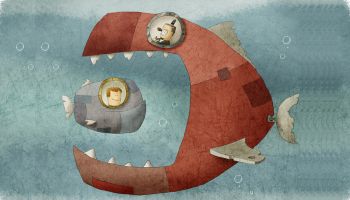 In this series of articles on the future of asset management, we’ve now come full circle, back to the rise in consumer power and consequent loss of ability, throughout most of the industry, to generate alpha.

Last time we talked about the shift in pension funds from defined benefit to defined contribution—which in some sense initiated the sea change in consumers’ degree of choice and responsibility for their own financial well-being. Technology and data have pushed this trend much further, to the point where consumers are now capable of controlling their investments from the smartphone in their hand.

Here we will pick up our discussion where we left off, from the notion that, while margin may be shrinking from the loss of proprietary knowledge for assets managers, a massive opportunity has opened up in the industry to gain back some control through acquisition and shaping of the investment advisement platforms that have begun to proliferate. Let’s look at how some of these tiny startups have begun to chew away at the established asset managers—and perhaps, how the industry can bite back.

How Are Disruptors Doing It?

As consumers’ eyes open to the world of investing, a few patterns have emerged that have informed and fueled a surge of small, app-based fintech companies. In the asset and investment management industries, one of these patterns—the wakeup call to consumers that they not only can, but must take control of their finances—took shape with companies’ shift to defined contribution retirement programs. As their vision started to refocus, consumers began to realize, beyond the adage ‘It takes money to make money,’ that investment managers and advisors don’t come free. Or even cheap. The man on the street, newly in charge of his own retirement nest egg, didn’t know the first thing about how to make all these choices—yet didn’t think he could afford a fancy financial advisor to help him figure it out.

So along came a collection of tuned-in, savvy startups that had their fingers on this would-be small investor’s pulse. They’d taken notice of the advice gap, and because they didn’t have an enormous legacy company to reorient, were able to offer advisory and other investment services at a fraction of the cost—sometimes for free, albeit heavily leaning on data and automation vs. one-to-one relationships.

A lenient and supportive regulatory environment in the U.K., where I’m based, has made it easy for an impressive number of these investment tech companies to spring up. Now some of them have American counterparts, and a few are making a play to expand into the U.S. market themselves. Here we’ll discuss some of their offerings, and look at some of the companies at the forefront of this disruption.

After struggling for years to gain traction, investment platforms are increasingly coming to the fore, as evidenced by Wealthify and Nutmeg in the U.K., two companies that have been around, largely unnoticed, for five or more years. According to a 2018 report by the Investment Association, one change these companies are creating is allowing individuals, for the first time, access to investments such as corporate bonds that are normally only available to institutions. One example of this offering is the U.K. investment platform WiseAlpha, which boasts “liberating a multi-trillion market for the masses.”

Other apps, such as U.S.-based Wealthfront, amalgamate robo-advisory services with low-cost fund investments, often via ETFs, with varying levels of ongoing management tailored to cost. Betterment, another U.S. online investment company founded in 2008, offers human advisors in addition to robo-advice; while budget trackers such as Chip in the U.K. and Mint in North America automatically analyze users’ spending habits and set up savings based on the amount an individual can afford.

As many consumers, and particularly younger consumers, learn about diversifying their investments, we’ve seen the emergence of investment apps that offer portfolios to individuals with lower barriers to entry than would normally be available. One such U.K. startup, MarketsFlow, offers £10 portfolios with complex product bases for algorithm-based trading. Other platforms cross between stock market investing and saving, for example Moneybox in the U.K. and Acorns in the U.S., which round up the change on purchases and save the difference to invest in stocks and shares.

In general, disintermediation is the name of the game for these disruptors, as many platforms completely bypass asset managers by directly investing in stocks for their customers—though ETFs are sometimes available as well. In the U.S., Robinhood was the first rogue e-broker to offer commission-free stock trading; FreeTrade in the U.K. likewise offers free, live investing, in both the British and American stock markets.

What all this adds up to for the asset management industry is the need to get smarter, in a quantified way, about their clients and, more fundamentally, about the consumer. Gone are the days when investments based on intuition or the way things have always been done are going to consistently generate profitable returns. The same can be said of new product creation—without making use of the direct data available on companies, investments, and consumers, these efforts are going to be swept away by the tidal wave of tiny disruptors who are getting it right. They are cutting out the intermediary—first and foremost the traditional financial advisor—as increasingly platform-oriented consumers learn to scan a lot of well-curated data all by themselves, on their phones.

The good news for capital-rich asset managers is that the majority of these startups have yet to reach a critical enough mass to become profitable. So they are excellent acquisition targets, as large asset management companies can offer them a ready client base and economies of scale in exchange for the consumer connection and knowledge the small tech companies can offer. Additionally, asset managers can gain an entirely new set of assets under management. But this will require a broad understanding of this new world, and an open mind in figuring out how best to engage with it.