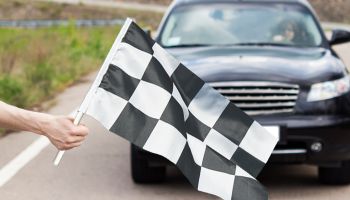 Aggregate auto loans at U.S. banks and thrifts edged up in the first quarter while delinquencies fell below year-ago levels. Auto loan balances at commercial and savings banks, not including holding companies, increased by $6.21 billion over year-end 2013 and $33.38 billion over the first quarter of 2013, reaching $358.27 billion at March 31. Aggregate auto loans 30-plus days past due or in nonaccrual status dropped to 1.52% at March 31, down from 1.98% at year-end 2013 and 1.55% in the year-ago quarter. 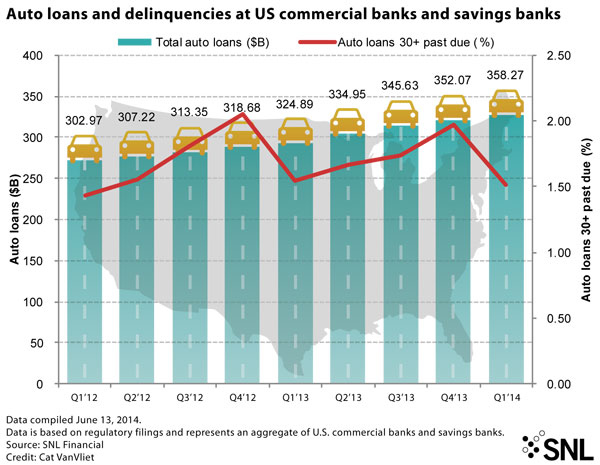 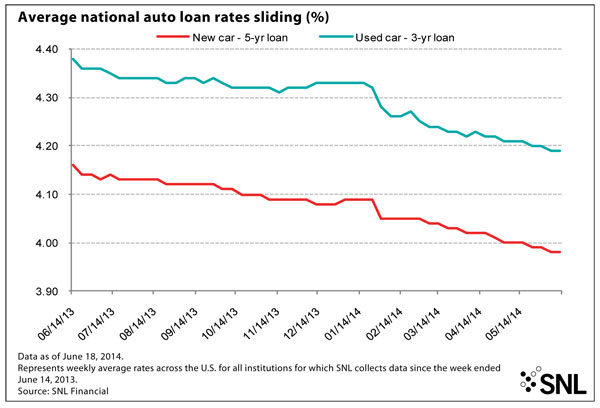 Wells Fargo & Co. overtook Ally Financial Inc. as the largest auto lender among depository institutions, reporting $52.61 billion in auto loans at March 31, compared to Ally's $51.92 billion. At least some of Wells Fargo's gains have come directly at the expense of Ally following the end of Ally's exclusivity agreement with General Motors.

During Wells Fargo's investor day in May, Thomas Wolfe, executive vice-president of consumer credit solutions, noted that auto originations jumped 16% quarter over quarter. Wolfe also remarked that 95% of the company's auto loans come from car dealers and that for every new car subvented business Wells Fargo does with the new GM dealer relationships, the bank books three used-car loans at the same dealership.

Santander Holdings USA was another beneficiary of an auto company's expired contract with Ally Financial, this time Chrysler Group LLC and FIAT. In February 2013, Chrysler announced a 10-year agreement with Santander Consumer USA Inc. whereby Santander would provide auto loans to Chrysler and FIAT customers and dealers under the name Chrysler Capital.

Santander Holdings USA's auto loans 30-plus days past due or in nonaccrual status were equal to 8.33% of total auto loans at March 31, the highest percentage among the top 25 depository institution auto lenders in SNL's ranking. 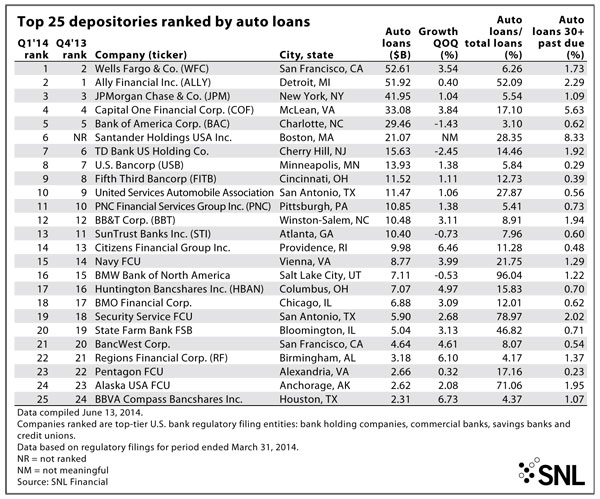