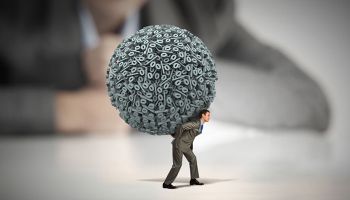 A change in the rate cycle could keep banks' tangible book value growth to a minimum, if history offers any guide.

Long-term rates have remained historically low, but swift increases in long-term rates last year, as well as the experience during the early 1990s, demonstrated that banks' tangible book values could come under pressure despite strong and healthy earnings.

"The compounded growth of tangible book value over time is one of the most important things we think in creating franchise value," Robert Patten, vice-president at Wellington Management, said at the SNL Bank M&A Symposium in early October.

Dory Wiley, president and CEO of Commerce Street Capital LLC, also noted that when investing in institutions, he directs bank managers to grow tangible book value per share by 10% a year, without sacrificing credit risk.

Since the credit crisis, bank earnings have rebounded strongly and tangible book values have grown. That growth slowed some in the second half of 2013, when rising long-term rates put pressure on banks' bond portfolios and turned unrealized gains in institutions' available-for-sale portfolios into unrealized losses by the end of the fourth quarter of 2013.

Available-for-sale (AFS) portfolios are subject to mark-to-market adjustments on a quarterly basis, and those changes flow through accumulative other comprehensive income (AOCI) and impact tangible book values.

With long-term rates falling back to historically low levels this year, banks have seen their unrealized losses turn back into unrealized gains. Eventually, many people expect that the rate environment will turn again and the trend will almost certainly reverse. If long-term rates rose notably in a fairly short time frame, banks could once again face a headwind in producing continued growth in tangible book value.

That pressure on tangible book values could come because a little over 20% of banks' assets sit in their securities portfolios and the vast majority of those assets—close to 80%—are in their “available for sale” (AFS) portfolios. The increases in long-term rates in the late spring and early summer of 2013 demonstrated that banks' sizable bond portfolios could serve as a deterrent to tangible book value growth.

The experience during the great bond massacre of 1994—whether such an event will play out again or not—offers further evidence of what could occur should long-term rates rise materially.

Between Jan. 1, 1994, and Dec. 31, 1994, long-term rates rose considerably, with the yields on the five-year and 10-year Treasury rising close to 260 basis points and 200 basis points, respectively. During that period, SNL data show that banks saw their median tangible book value only rise modestly to $7.58 per share from $7.55 per share at the end of 1993 even as net income remained strong and grew from the prior year.

Rate trend will  hit capital in larger banks, too

The impact that changes in long-term rates will have on bank bond portfolios will also impact regulatory capital, at least for the nation's largest institutions.

Under the Basel III rules, changes in “accumulated other comprehensive income” (AOCI), which captures unrealized gains and losses of banks' AFS portfolios, would also flow through regulatory capital at institutions with more than $250 billion in assets. Smaller institutions will have the opportunity to opt out of the provision and must make that election during the first call report they file after Jan. 1, 2015.

Some banks are highly aware of the issue and have increasingly relied on their held-to-maturity portfolios to protect against rising rates since they are not required to make mark-to-market adjustments to those portfolios on a quarterly basis.

Other banks are keeping their powder dry and investing cautiously in the bond market given just how low rates currently are.

Bank of America Corp., for instance, warned on its third-quarter earnings call in mid-October that volatility in the bond markets could cause it to take actions to reduce the risk that an eventual increase in rates would have on the company's AOCI.

BofA CFO Bruce Thompson said on the call that the actions would reduce the company's duration risk and provide additional liquidity to reinvest in a higher rate environment. He noted that the company planned to cautiously invest in the fourth quarter since long-term rates were significantly lower than they were in the third quarter.

"We're not talking about a material shift," Thompson said on the call. "We're just flagging something for you given the magnitude of the rate move we've seen this quarter." 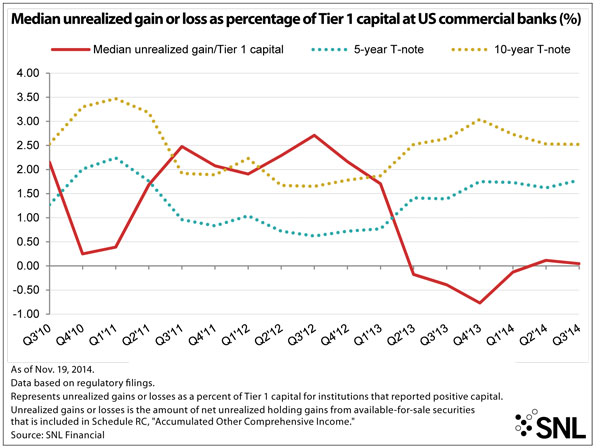