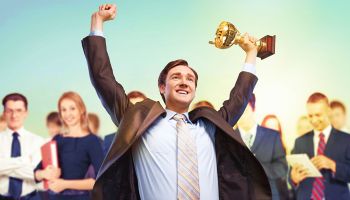 Changing demographics and changing employee expectations are affecting all industries, including the financial services business. To attract and retain younger employees, many banks and other financial institutions are adapting their employee compensation strategies to reflect a “total rewards” approach, which incorporates a broad range of benefits and incentives in addition to salaries and cash incentives.

Every year, Crowe Horwath LLP surveys financial institutions throughout the U.S. about compensation trends, benefits, incentives, and other human resource issues. The 2015 Crowe Financial Institutions Compensation and Benefits Survey offers several examples of how the total rewards model is being applied in banking organizations.

The total rewards model was introduced in 2000 by WorldatWork, a leading association for human resources professionals.* The model depicts the strategic elements of the employer-employee relationship, identifying programs and practices that organizations employ to attract, motivate, retain, and engage employees.

These elements can be grouped into six broad categories:

1. Compensation: both fixed and variable pay

5. Work-life effectiveness: practices and programs to help employees achieve success at both work and home

6. Talent development: tools and opportunities for employees to advance their skills, competencies, and careers

These elements are closely related, of course, and there are many instances in which they overlap. For example, certain types of recognition (such as performance bonuses) also are a component of an employee’s compensation. Likewise, some talent development benefits (such as tuition reimbursement for college courses) also can contribute to helping employees achieve better work-life effectiveness.

Despite these complexities, however, the broad elements of the model offer a systematic way to visualize the various tools organizations can use as part of their effort to create a satisfied, engaged, and productive workforce that delivers value to the organization. Although the Crowe Financial Institutions Compensation and Benefits Survey is not based on this model and actually predates it by many years, it nevertheless offers a number of illustrations of how banks can adapt elements of the total rewards model in their compensation strategies in order to respond to employees’ changing expectations.

Obviously the dominant element of every compensation package is the employee’s base pay. The 2015 Crowe survey suggests more banks are choosing to diverge from market averages in terms of base pay.

In 2010, nearly 88% of survey respondents reported their base pay levels were at or within 10 percent of average market levels (Exhibit 1, below). That number remained relatively unchanged for several years.

But then the direction changed. The number of banks matching market averages began dropping in the 2013 survey and dropped even more dramatically in 2014 and 2015.

Interestingly, the divergence in base-pay strategies appears to be roughly equal. That is, both above-market and below-market strategies have become more widespread over the past few years.

On the other hand, when asked about their use of cash incentives in addition to base pay, the number of institutions offering incentives that exceed market levels by 10% or more has increased sharply since 2013 (Exhibit 2).

Growing use of above-market cash incentives could be interpreted as an encouraging sign that banks are adapting to employees’ changing expectations. However, another survey response indicates banks might not be experiencing the full potential benefit of such incentives.

It generally is recognized that, in terms of motivating employees and encouraging desired behaviors, cash incentives are much more effective when they are visibly tied to individual or group performance, rather than being awarded on a discretionary basis.

Over the past several years, however, a growing number of survey respondents have indicated they are giving nonofficer employees discretionary cash bonuses, rather than tying these incentives to individual, team, or organization performance (Exhibit 3). 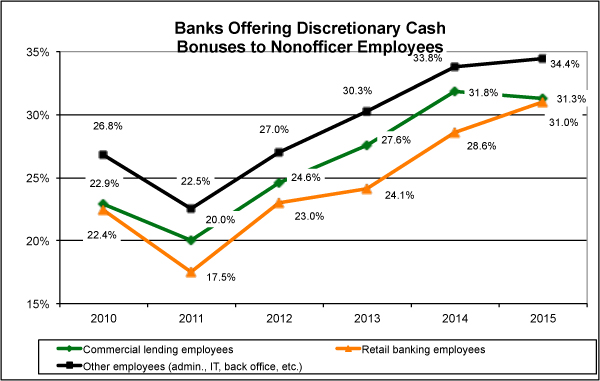 Employee benefits, particularly healthcare benefits, are another major component of the total rewards compensation model. Unfortunately, the industry trends in this area are somewhat ambiguous.

In subsequent years this ratio ranged from a low of 14.5% in 2013 to a high of 18.8% in 2014, with no discernible trend in either direction. Looking specifically at average expenses for medical and dental insurance, a similar pattern—or rather lack of a pattern—emerges.

It is likely that the fluctuations in the benefits-to-base pay ratios reflect adjustments and policy changes that banks and employees were making during that time to comply with the still-evolving provisions of the Patient Protection and Affordable Care Act (Obamacare). With the act’s implementation now largely settled, trends in benefits expenditures are likely to become clearer in coming years.

The 2015 survey responses suggest several opportunities for banks to make more effective use of the employee recognition and performance management aspects of the total rewards model.

In contrast, a large number of banks offer programs such as holiday parties or awards for years of service, neither of which are a reward for a specific action or accomplishment by employees, other than merely staying employed.

Holiday parties and years of service awards can help generate employee loyalty and a sense of teamwork. Yet, as was the case with cash incentives, recognition programs that are visibly tied to a specific behavior or achievement generally are more effective at incentivizing employees and encouraging improved performance.

The 2015 survey reveals that a significant number of banks now offer programs that can help employees develop their talents and capabilities or improve their work-life effectiveness. These are the last two of the six basic elements of the total rewards model, and are areas in which employee expectations continue to change significantly.

Among the most popular offerings in the 2015 survey were programs such as casual days (a virtually cost-free incentive), along with relatively low-cost offerings such as company cell phones, tuition reimbursement, and wellness programs, as well as employee assistance programs (EAPs) that help employees deal with personal problems that could affect their job performance, health, or general well-being (Exhibit 6).

With some minor year-to-year fluctuations, the use of such programs generally has been trending upward in recent years. This trend suggests that regardless of whether they formally endorse or subscribe to the total rewards model, a growing number of banks are employing elements of the total rewards approach to achieve the overarching objectives of every compensation strategy: to attract, motivate, retain, and engage employees, who in turn will help the bank achieve its business performance goals and add value to the organization.

* “What Is Total Rewards?”, WorldatWork