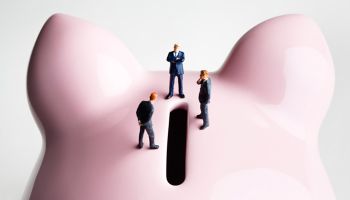 Reston, Va.-based Access National Corp. cinched a substantial merger deal that will bolster its relevance in affluent markets near the nation's capital, give it added scale, provide it greater business line diversity and fortify its funding with a higher level of core deposits, executives said after announcing the transaction Oct. 24.

The deal, a $233.1 million merger with Middleburg, Va.-based Middleburg Financial Corp. in which Access stands to be the surviving entity with its shareholders owning a majority of the combined company, also formally turns Access from a potential seller into a buyer.

That shift, analysts said, may have caught some investors by surprise, as many on the Street had viewed Access and its strong commercial-and-industrial lending operation as an appealing target for a larger bank buyer.

That helps explain why shares of Access dropped about 10% in morning trading following the deal announcement, Keefe Bruyette & Woods analyst Catherine Mealor said in an interview. She said some investors likely also spotted the news as a profit-taking opportunity on a stock that had surged more than 20% over the previous 52 weeks. (S&P Global Market Intelligence posted this article originally on Oct. 24, 2016.)

"But I don't think it was about opposition to the deal itself," Mealor said.

Raymond James analyst William Wallace IV agreed that shares of Access likely took a hit from investors who have owned the stock because they believed it would ultimately prove to be a seller. He also said in an interview that the deal is a large one for Access and that some investors are likely concerned about integration risk as a result.

Access currently has about $1.36 billion in assets, only slightly larger than Middleburg. Following the deal, which is slated to close in the second quarter of 2017, Access will have nearly $2.7 billion in total assets, $2.2 billion in deposits, $1.8 billion in gross loans and $2.5 billion in assets under management and administration, the companies said.

Shares of Middleburg, meanwhile, jumped more than 12% in morning trading.

Influence of an activist investor

Executives from the two companies said they had been in talks and delving into due diligence for about five months.

That means the discussions got under way shortly after Middleburg's largest investor, David Sokol, in April withheld his support for directors seeking re-election, saying at the time he was eager for the company to explore its strategic options, including a sale. While profitable, he said, Middleburg lacked the size and market penetration to compete with larger players as efficiently as it otherwise could if it partnered with another bank.

Sokol could not be immediately reached for comment, and Middleburg President and CEO Gary Shook did not respond to an interview request in time for this post.

But Mealor said that, given when the deal talks commenced, it appears likely that the investor activism played a role in bringing Middleburg to the deal table. "That very much could have been a driver," she said.

Either way, Mealor said she likes the deal, saying it will merge Middleburg into a more efficient bank and provide Access greater size, funding and reach in appealing but competitive markets, where a larger balance sheet, lower deposit costs, higher lending limits and more products should help it fuel growth.

Wallace of Raymond James agreed that the deal makes strategic sense and said that, financially, "the metrics also look attractive."

Middleburg gives Access a lower-cost deposit base than it currently has, providing opportunities to bring down interest expenses. It also gives the buyer a strong trust and wealth management business, which should diversify Access' fee-income streams. Access generates fee income on a solid mortgage operation, but home lending can be volatile.

Middleburg serves affluent Virginia markets, including the cities of Richmond and Williamsburg. Those markets will complement Access' current focus on Greater Washington, D.C., one of the wealthiest areas in the nation, executives said.

"I believe we serve the best markets in the country," Access President and CEO Michael Clarke said during a call with analysts and reporters to discuss the deal. "All measures of economic vitality are favorable."

He added that credit quality on both sides of the deal is sound, as evidenced by the months of due diligence, giving him confidence in the integration. "We dove deep," Clarke said.

Access said it expects the deal to be at least 7.5% accretive to earnings per share next year and more than 10% accretive the following year. It expects to pay back dilution to tangible book value within one quarter.