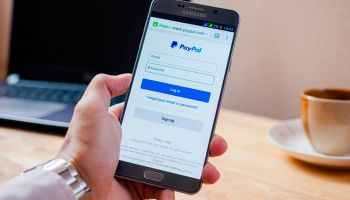 As personal finances become increasingly digitized, the way people pay one another is transitioning from cash and checks to payment apps.

Financial technology company PayPal has led the nascent mobile person-to-person payment market, but big banks are going after PayPal to defend their current base by debuting faster services and partnerships aimed at improving the convenience and reliability of their person-to-person services.

P2P’s not just for millennials anymore

The mobile person-to-person market is maturing; transaction volumes are growing and payments are becoming safer and faster.

While data are not readily available and payment service providers only sporadically disclose transaction volumes, we estimate that market leader PayPal, along with the big three banks—JPMorgan Chase & Co., Bank of America Corp., and Wells Fargo & Co.—processed about $93 billion in person-to-person transactions in 2015, up 28% from 2014.

PayPal is the single-largest provider of mobile person-to-person payment services in the U.S., and its focus on the service has grown since the firm spun off from eBay in mid-2015.

In 2015, PayPal processed $41 billion in mobile person-to-person payments, up 42% from 2014, according to company disclosures. 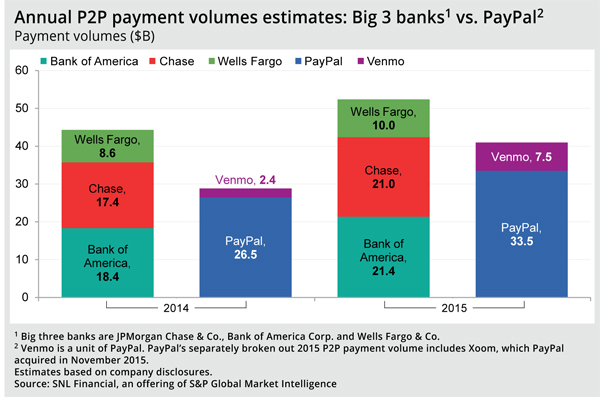 PayPal executives have attributed much of its growth to the mass popularity of Venmo, a social media-augmented person-to-person payment service most popular with millennials. PayPal acquired Venmo as part of the $800 million acquisition of payment processing startup Braintree in late 2013.

How trio of big banks are doing

In the second quarter of 2016, each of the big three banks disclosed person-to-person payment volume details for the first time, enabling estimates of each bank's respective person-to-person volume for 2014 and 2015.

Growth rates provided by Bank of America guided estimates for the other banks' 2014 person-to-person volumes. In addition, estimates featured the following assumptions:

• Increases in monthly person-to-person payment volume per person between 2014 and 2015.

According to our estimates, the big three banks combined outweigh PayPal in total annual person-to-person volume by a narrow margin.

PayPal does about twice the estimated payment volume of each bank individually, but the big banks are coming for PayPal's market share. And they’re doing it together.

Banks have offered mobile person-to-person services within their respective apps for the last several years, but these solutions could take days to process and require multiple steps for receivers to take delivery of payment.

To fix this, a network of the country's largest banks, including JPMorgan, Bank of America, and Wells Fargo, came together to form clearXchange. What began as a consortium of six member banks has grown to include 24 banks and fintech companies.

Working together, these banks can process and clear person-to-person money transfers in near real-time, something PayPal has yet to achieve. While PayPal transfers are instant with respect to PayPal accounts, transferring money to a connected bank account still takes a business day to complete.

In an effort to brand and market this service to both bank customers and potential third-party users, clearXchange debuted Zelle in October.

How Zelle fits into picture

For banks to cede the person-to-person payments market to a nonbank entity like PayPal is to cede a significant piece of their customers' finances to a competitor. Zelle is the banks' answer to Venmo and PayPal, and it could help them stave off competition in other aspects of their business.

Executives in the banking and consumer credit industry worry that fintech companies like PayPal that have become embedded in the financial lives of so many customers may move in on other areas of the banking and financial management industry, particularly areas like personal financial management and personal loans. By fortifying their payments business, banks are hoping to prevent further disruption to their business model.

The impending holiday season will no doubt offer valuable insights into the competitive dynamic between PayPal and the big banks.

PayPal says it expects to process more than 17 million person-to-person transactions in the month of December and predicts Venmo's gift box emoji will be used 350,000 times in the months of November and December as people gift money.