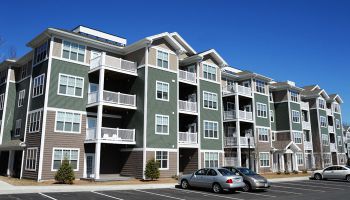 Since 2010, apartment sale prices have more than doubled, and many markets have had years of double-digit rent growth. But now, "there are forecasts of pretty broad-based potential [multifamily] rent declines in a lot of the major cities," said Bill Parker, chief risk officer for U.S. Bancorp, during the bank's Jan. 18 earnings call.

Bank regulators announced in late 2015 that they would pay "special attention" to risks associated with commercial real estate. It was a reminder of guidance from 2006 that advised additional risk mitigation policies if construction loans equaled at least 100% of capital or if a bank's overall commercial real estate portfolio grew 50% in three years and exceeded 300% of capital.

In the aggregate, lenders have pulled back slightly on mutlifamily lending. For the 12 months ended Sept. 30, 2016, aggregate U.S. multifamily loan volume was down 2% year over year.

Yet many lenders continue to push ahead with commercial real estate lending. As of the 2016 third quarter, 521 banks hit at least one of the regulatory criteria, marking the sixth consecutive quarter the number of banks breaching the concentration markers increased. 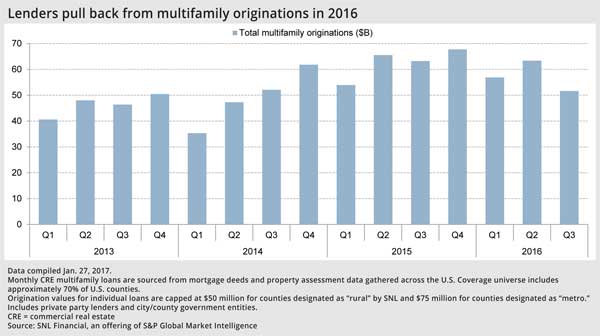 New York City and San Francisco have beaten the national average in recent years in terms of rent growth, but they now are sources of concern. Effective rents in both markets have turned negative, and new unit supply is expected to increase this year.

Bankers at leading multifamily lenders downplay bubble concerns, though, saying many of the multifamily underwriting mistakes that contributed to the Great Recession are not being repeated.

Chad Tredway, head of commercial term lending for JPMorgan Chase & Co.'s east region, said banks are not underwriting on expected future rent, a key contributor to massive losses such as the Stuyvesant Town deal apartment complex in New York City, purchased in 2006 and in default by 2010. In addition, property buyers are putting more money down, providing a greater cushion against a potential decline in value, Tredway said.

JPMorgan issued the most multifamily loans in the 12 months ended Sept. 30, 2016, posting a 1.2% year-over-year increase. During the bank's Jan. 13 earnings call, management emphasized the bank's focus on second-tier buildings in top markets known for limited supply. While effective rents in New York City turned negative in the 2016 fourth quarter, lenders said they expect softer rents to only affect high-priced properties as the vast majority of new construction is at the upper end of the market.

"There might be a softening in rents at the high end, but I don't think that will happen at the low end," said Ken Mahon, CEO of Dime Community Bancshares Inc.

Other lenders have increased multifamily lending even more. Berkeley Point Capital LLC, for example, posted a 37.7% year-over-year increase. Mitch Clarfield, senior managing director for the company, said multifamily lenders can avoid losses by maintaining a loan-to-value ratio of 75% and underwriting on existing rents with a 1.25x debt-service coverage ratio—meaning the net income from a property equals 125% of the mortgage payments.

Clarfield and other lenders also said real estate owners are putting up more equity as lenders focus on debt-service coverage ratios instead of loan-to-value ratios. By underwriting a loan based on what the rent can support, real estate owners have to use more cash since appreciation has outpaced rent growth.

"Our underwriting guidelines allow us to go higher on loan-to-value, but we just don't get there when you look at the cash flows," said Ed Ely, head of commercial term lending for JPMorgan's west region. 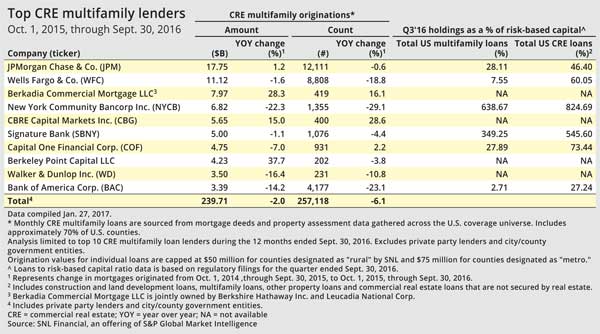 Naturally, lenders at the top of the market also feel comfortable with their business models. Life insurance companies, which tend to be more conservative lenders, focus on high-quality properties. Gary Otten, head of real estate debt strategies for MetLife Inc., said the transactions he has seen continue to attract multiple bidders.

"Anecdotally, I'm hearing a different story in secondary markets and secondary properties," Otten said. He acknowledged that high-end properties historically have tended to be more volatile but noted that MetLife protects itself by taking a senior position in the debt stack and allowing very little, if any, mezzanine debt.

"There's more discipline on the lender side, but also on the borrower side," Otten said. "You don't hear people asking for massive amounts of leverage."

Relying on large equity cushions and conservative underwriting methods as bulwarks against weakening rents, top multifamily lenders see no reason to slow down.

Bank of the Ozarks Inc. is a leading construction multifamily lender in top markets, coming in at No. 2 in New York City over the last year. The company's construction debt is just below 200% of its total capital, nearly double the 100% concentration marker that regulators say warrants special attention.

Chairman and CEO George Gleason II said he is willing to continue growing the bank's multifamily exposure since the bank maintains extremely conservative underwriting guidelines. Even in New York City, where rents are declining and projected to fall further, the softness will not trigger losses for lenders, he said.

This article originally appeared on S&P Global Market Intelligence’s website under the title, "As most lenders pull back from multifamily, others plow ahead"