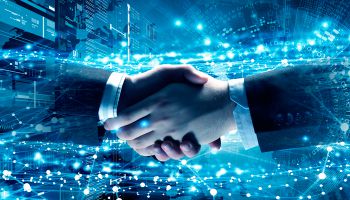 6 strategies to help you get the most out of fintech partnerships.

Fintechs are multiplying like rabbits. Global investment in financial technology companies has tripled since 2014, according to Accenture’s Fintech’s Golden Age report. In first-quarter 2016, investment increased 67% over the same period the previous year, the report noted. McKinsey & Company estimates that there are 12,500 fintechs worldwide.

In addition to an increase in the influx of capital, there’s been a marked change in the type of fintech investments from competitive to collaborative offerings. In 2010, 60% of all the investments in fintechs were directed toward competitive offerings versus 40% in 2015, says Robert Gach, capital markets managing director for Accenture Strategy. Part of the reason for the change is that banks are shifting their view of fintechs, seeing them as more friend than foe. In a recent survey by Manatt, Phelps & Phillips, LLP, 86% of regional and community banks say that working with fintechs is “absolutely essential” or “very important” for their institutions’ success. PwC agrees that partnerships are critical, predicting in its Blurred Lines: How Fintech is Shaping Financial Services report that more than 20% of financial services business will be at risk to fintechs by 2020. Collaboration can alleviate some of that risk.

Ben Wallace, executive vice–president of operations and technology at $1.3 billion-assets Orrstown Bank, Shippensburg, Pa., concurs that a shift is occurring. “We are seeing more banks partnering with fintech companies,” he says. But the partnership isn’t one way. Fintechs benefit as well. “Fintechs are recognizing that they can grow their business if they partner, rather than compete with banks,” notes Wallace. 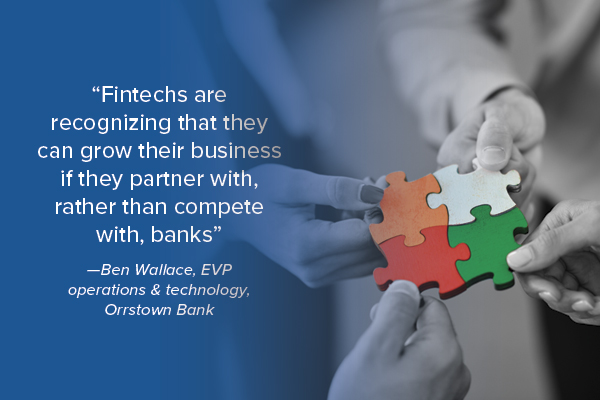 Chris Tremont, executive vice-president of virtual banking for Boston-based Radius Bank ($850 million in assets), has partnered with fintech companies for five years. “When we started working with fintechs, a lot of financial institutions seemed to have an ‘us versus them’ mentality and were either scared to work with fintechs or viewed them as competition. Today, banks and fintechs seem more willing to partner,” he explains.

A note of caution comes from an executive with one of the broadline bank technology providers. “Partnering with a competitor can be risky,” says John Zepecki, group head, global lending product management at D+H Corp. He points out that some companies did not fare well after partnering with Amazon for distribution and other services. “The lines get blurred when competitors partner,” he says. “By contrast, bank technology companies are interested in helping financial institutions be more successful. That’s our business.”

In Banking Exchange’s October/November 2016 cover story, “Core Systems at a Crossroads,” one of the complaints expressed by banks about tech providers concerned the slow pace of innovation. Zepecki notes that tech companies have a responsibility to keep up with the latest trends and provide competitive products.

Because most banks have relationships with one of the bank technology companies, the issue of choosing between the known and the lesser known is complex. And it’s not necessarily an either-or decision, as discussed further on. 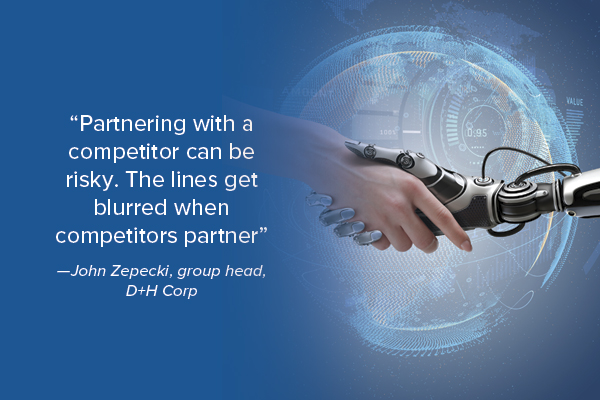 For those banks ready to partner with fintechs, however, here are six guidelines to keep in mind.

1. Lead with your need

With so many fintechs vying for bank attention, it can feel overwhelming to choose the right partner. Dan Mercurio, senior vice-president, consumer and small business banking, Cambridge (Mass.) Savings Bank ($3.2 billion in assets), recommends that banks evaluate their needs first to avoid being distracted by new technology. “Identify the problems you are strategically trying to solve, and then determine if a fintech partnership is the right way to solve that problem,” says Mercurio.

He adds, “By analyzing your needs, you’ll whittle down your consideration set.”

Accenture’s Gach agrees that banks need to begin any partnership with a vision of what they are trying to accomplish, such as filling in product or service gaps or improving customer service, or they risk being overwhelmed by the number of fintechs to choose from.

Clear objectives help the fintech as well, says Jeff Helm, director of account services for Race Data, a data-driven Canadian marketing fintech that uses customer behavior data to drive personalized engagements between a bank and its customers. “A plan gives us a framework to communicate with the bank.”

Canh Tran, cofounder and CEO of Rippleshot, a fintech that uses machine learning and data analytics to identify fraud, agrees. “A successful partnership needs corporate resources to succeed, so the objective of the partnership must be clear enough and important enough” to attract resources, says Tran.

It’s very important to understand your strategic plan and business model before embarking on a partnership, adds Tremont. “Identify the short-, mid-, and long-term plans, and evaluate how the fintech partner will solve those problems.”

For a partnership to work, both bank and fintech have to see the value in the partnership, says Orrstown Bank’s Wallace. “If either party is carrying all the weight, the partnership should be a no-go.”

Orrstown Bank, headquartered in a small town about an hour outside Harrisburg, Pa., partnered with Race Data. For Race Data, the partnership was a chance to expand its business beyond travel and retail into financial services.

Race knew it would face a learning curve working with a bank, but the fintech was committed to the partnership, including becoming Service Organization Control (SOC) 2 compliant. (SOC2 is an accounting standard banks can use to help determine the security, availability, processing integrity, confidentiality, and privacy of third-party systems.) Both the bank and Race Data had “skin in the game,” and both were willing to allocate resources to making the partnership work. “This was not an experiment,” says Helm. “We all really wanted this to succeed.”

Rippleshot’s Tran says that trust between the bank and fintech is critical to ensure that both parties benefit. “Our bank partner has to trust that we can deliver what we say we can deliver, and we have to trust that the bank won’t steal our intellectual property and move to another vendor.” He adds, “It takes a while to build that trust and deepen the partnership.”

Shared passion for the project also is important, notes Mercurio of Cambridge Savings Bank. The bank’s team was excited because it would hold the distinction of becoming the first bank to offer a robo advisor integrated into a retail offering. San Francisco-based start-up SigFig was excited to partner with Cambridge Savings Bank since it was its first foray into financial services. “When a fintech is trying to prove that they can work with banks, they are more willing to collaborate around custom development,” points out Mercurio.

When Cambridge Savings Bank partnered with SigFig, Mercurio was prepared for a potential culture clash. “We’re a 200-year-old community bank, so we knew there were going to be differences in how we do business,” he recalls. But the bank selected SigFig, in part, because it valued those differences. “From the beginning, SigFig acknowledged that while they had the product, we had the loyal customers,” he says. “They appreciated our legacy and what we brought to the partnership.”

Good planning alleviated much of the stress that cultural differences can breed. For example, SigFig worked at a faster pace than the bank was used to, so Mercurio encouraged the bank team to have candid conversations with SigFig about finding a pace that was comfortable for the bank, yet kept the fintech team engaged and energized.

Cambridge Savings Bank’s team also learned from the differences. “We are better at managing projects as a result of working with SigFig,” says Mercurio. Since the launch of the automated investment service, the bank created a formal project management office and hired a project management head.

“This understanding sets the stage for a better long-term relationship,” notes Tremont.

At Radius Bank, finding fintech partners that invest heavily in security and privacy, and understand the importance of regulatory compliance is critical. “We put compliance and security on the table from day one,” says Tremont. “If the fintech team doesn’t appreciate the importance of these factors, we don’t work with them.” This is an area where established bank technology companies—also disrupted by the fintech “revolution”—have an advantage due to long experience with compliance issues.

Cambridge Savings Bank engages its internal compliance, risk, and legal teams early in the fintech selection process to discuss and resolve potential issues. The bank also elicits feedback from its regulators. “We knew we would face compliance challenges building a digital investment solution. Involving those teams early on allowed us to identify those challenges up front and tackle them,” says Mercurio.

5. Worry about legacy integration from the get-go

A recurring theme, particularly among small- and mid-sized banks that tend to be dependent on one of the three largest bank technology companies, is the difficulty of integrating an application from a fintech or any third party into their overall tech package. As several bankers told Banking Exchange, the large companies will at times decline to work with third parties, forcing the banks to use a service offered by their core provider, which may not be their first choice. 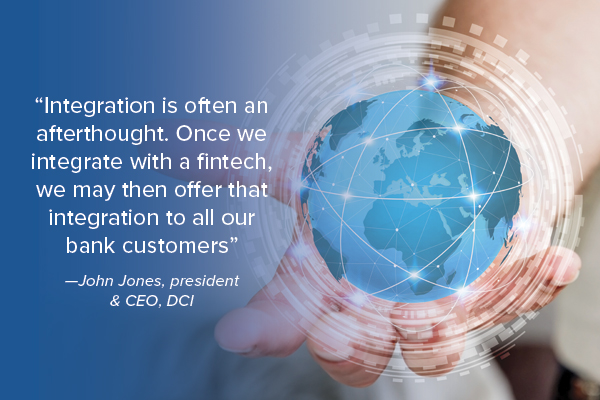 Some core providers, however, take a different approach to integrating outside applications. John Jones, president and CEO of bank-owned core provider DCI, says banks need to consider legacy integration before they focus on the fintech product capabilities.

“Often, the integration is an afterthought,” says Jones. That said, DCI is open to integrating with fintechs, but first vets these companies to ensure that shared data will be secure. “Once we integrate with a fintech, we may then offer that integration to all our bank customers,” Jones explains.

Cambridge Savings Bank brought its online banking provider Digital Insight, owned by NCR, into initial conversations with SigFig. Digital Insight was enthusiastic, says Mercurio. “SigFig engineers worked with Digital Insight engineers, and we achieved the integration we desired,” he says. “I give both partners a lot of credit for dedicating time to work with each other.”

Wallace notes that Orrstown Bank applies the same vendor management program to all vendors, including fintechs. However, there are times when the bank’s management decides to make an exception based on extenuating circumstances. “A fintech may not have the same type of financial documents a public company has,” points out Wallace. “Although we follow the same due diligence process, we may evaluate the results a bit differently.”

Accenture’s Gach concurs, saying that banks may need to be flexible in their selection criteria. “If you apply the same criteria to a fintech as you do to a traditional provider, you may screen out your best fintech partners,” he maintains.

There is, perhaps, a bit—or a lot—of work needed from a bank to create a successful partnership with a fintech. But for the banks that have taken the plunge, the rewards are worth the extra effort.

Says Wallace of his bank’s decision to work with a fintech company without a track record in financial services: “We couldn’t rely on our core provider to give us the products we needed to be aggressive in analytics. We needed someone with domain expertise that could help us deliver something really powerful to our customers. Working with a fintech isn’t without challenges, but at least fintech provides an option for delivering what we need.”

Partnering with a fintech also can stretch a bank in positive ways. “We find it refreshing to work with fintechs that haven’t grown up in the banking industry, because they are willing to question the status quo,” says Tremont. “We never say ‘because that’s how it’s always been done.’ We’ve learned to have open lines of communication to find creative solutions to problems.”

Read "Partner or vendor: Why it matters in fintech world"

This article originally appeared in the February-March Banking Exchange magazine