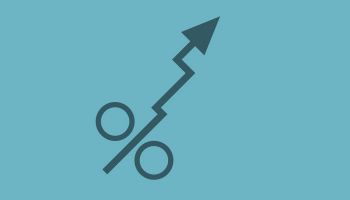 While most of the banking industry continues to shrink term funding, some institutions are marketing CDs well above current market rates.

Deposit rates across the industry only increased slightly in 2016, with the cost of interest-bearing deposits climbing just a few basis points following the Federal Reserve's rate hike in December 2015. The Fed raised rates again a year later at its December 2016 meeting, and a handful of institutions have responded by significantly raising rates on select CD products. 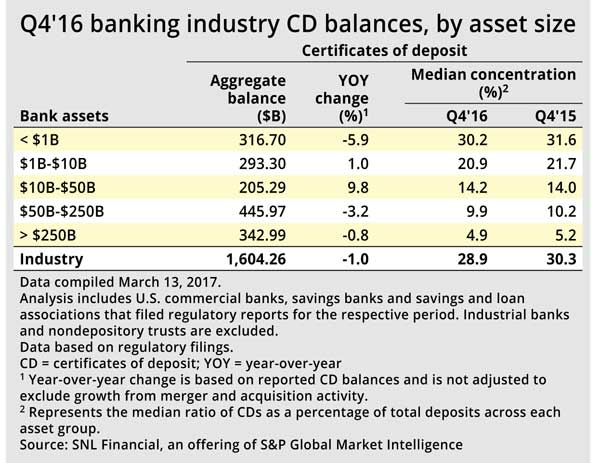 The top 25 institutions in that group lifted rates on those products in the range of 65 to 125 basis points. The Fed raised rates by 25 basis points again on March 15 but the swift increases in CD rates came before that move, showing that some institutions passed the full change in market rates, or even more, to their customers.

That would mean they recorded a beta in excess of 100%, at least on those CDs. Deposit betas measure just how much the change in rates banks pass onto their customers and stood at just 12% across all deposit products for the banking industry in 2016. Some bankers have suggested that betas on CDs would be in the range of 90% to 100% because the products are rate sensitive.

The pace of rate increases has been relatively slow over the last 18 months, though, and many bankers expect customer behavior to change after more substantial increases in rates. The banks offering stand out rates at this point in the cycle might be marketing deposit specials—limited time offerings aimed at luring new customers to a franchise. Banks almost certainly will experiment with those offerings and other higher-rate forms of term funding if short-term rates continue moving higher.

A number of banks have reported significant increases in CDs over the last year, and many of those institutions have put their liquidity to work. S&P Global Market Intelligence found that the 20 institutions that grew CD balances the most from a year earlier reported a median loan-to-deposit ratio of 87.65% at the end of the fourth quarter, compared to 71.93% for the banking industry in aggregate.

Some of those banks seemed focused on growing CD balances, including a handful of institutions that do not have extensive branch networks, such as Live Oak Bancshares Inc. and First Internet Bancorp.

Other institutions are expected to "ladder" out deposits into a variety of CDs with different maturities. That practice could keep the bank from raising deposit costs all at once while offering some protection from early withdrawals in the event that rates rise materially. Penalties customers would incur from early withdraws are not believed to be punitive enough to stop them from taking funds to a competitor offering far higher rates. If a CD is going to mature soon, however, some banks believe a customer will be more likely to hold their funds steady and wait to roll them into another product once the maturity occurs.

Banks could also use tiering with their CD products, offering customers higher rates if they are willing to park more funds at the institution. First NBC Bank Holding Co., which is working to recapitalize its balance sheet, reported the ninth-largest year-over-year growth in CDs in the fourth quarter. The New Orleans-based bank is offering customers tiers on CDs with maturities over six months.

Still, those banks that have grown CDs materially or have experimented with different product offerings are not the norm across the industry. Most banks have reduced their reliance on CDs, with the concentration across the industry falling to a median of 28.93% of deposits in the fourth quarter of 2016, from 30.31% a year earlier. The decline was consistent across banks of all sizes, with the exception of banks in the range of $10 billion to $50 billion in assets, which increased CDs modestly to a median of 14.17% of deposits from 14.00% a year earlier.

It could take a few more rate hikes to spur significant change across the industry, and more rates increases are expected this year, suggesting that a funding shift could lie on the horizon. 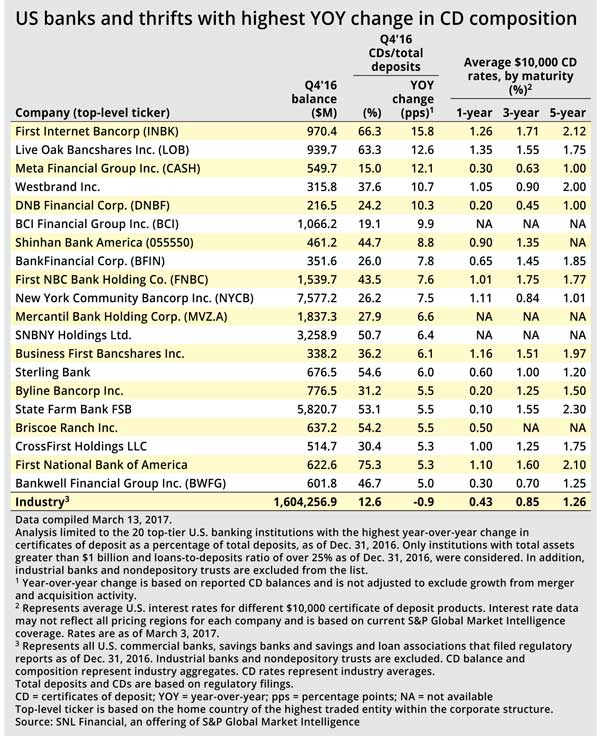