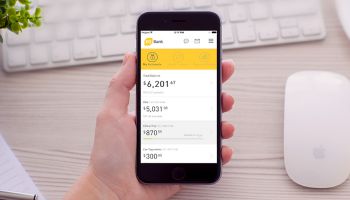 No, the digital bank’s small staff faced an electronic tsunami.

More than 1,000 people attempted to open accounts online that first day, and “we didn’t have the backshop capacity to have everyone onboarded as fast as they were coming in,” says Dickinson.

“My team and I were sleeping under our desks to keep up with the demand coming in 24/7,” Dickinson continues. At one point, EQ Bank had to freeze new account openings temporarily. The waiting list reached 15,000 at one point. 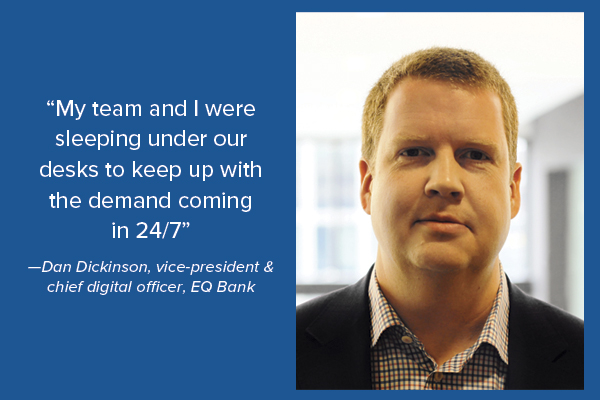 The experience was preferable to deafening silence, certainly, but Dickinson and his team didn’t have time to cheer. They had to find some workflow “shovels”—solutions to address the much-higher-than-expected volume.

Popularity on rate and convenience

Today, EQ Bank has onboarded over 30,000 customers and brought in over $1 billion in deposits, blowing through the initial goals for the digital effort ($500 million in the first year). Before getting into how EQ dug out, more about the bank and what made its offer so attractive.

EQ Bank is the digital platform for Canada’s $22 billion-asset Equitable Bank, the country’s ninth-largest domestic bank, based in Toronto. Since its beginning in 1970, parent Equitable has been a branchless bank. It funds its residential mortgage and commercial lending concentrations through a combination of securitizations and the sales of guaranteed investment certificates—considered a type of insured deposit in Canada—and high-yield savings accounts opened through a network of investment advisors.

The parent bank doesn’t offer ATM access, handle cash, or issue checks for customer use. The efficiency produced by the branchless approach is considered a major advantage over the “big five” Canadian banks that have branch networks and an omnichannel approach.

As described in Equitable Bank’s annual report, funding was a key reason behind the formation of a digital bank: “The ability to now access consumer deposits directly through the EQ Bank platform enhances and diversifies our funding capacity.” Management felt EQ Bank, built as a mobile-first approach from the ground up, “gives us the flexibility to accommodate the launch of new Equitable banking services over the long run.”

EQ Bank’s debut product was EQ Bank Savings Plus, a hybrid, insured transaction/savings account earning a high rate of interest—3% when the digital platform went public. While the initial account was fairly simple, EQ has been adding features. In time, the account, currently considered a secondary one, could become primary for many users.

In just its first year, EQ Bank has proven attractive enough to savers that it accounts for over 10% of Equitable Bank’s total deposits. “I sleep much better at night since knowing that we can always go to that tap,” Andrew Moor, Equitable president and CEO, said recently.

Dickinson says a surprise about the EQ Plus account—which can be accessed via computer and smart devices—is it appeals to more than just younger people. “We get quite a few seniors—more than we expected to get,” he says.

Although the rate has been lowered to 2%, in stages, from the initial 3% rate—partially to throttle back growth—the account still pays a strong return, made possible through lack of overhead. The account requires no monthly balance, and no monthly fee is charged. Enrollment is made by depositing a signed check from another institution via remote capture.

Help from a partner

When Dickinson began the process of building EQ in 2013, he says he knew the project would hinge on forging relationships with outside expertise. Unless invention made sense, his attitude was “buy, don’t make.” Take, for example, the platform’s core system, provided by Temenos. Dickinson knew he didn’t want to get into customization of the core, so he found the system he deemed best in the Temenos Connect core.

He chose Hewlett Packard Enterprise to host the digital bank, believing the firm could do a better job on security, being in the business full-time, than his small staff. (Originally this comprised around 25 employees, and is a bit smaller now that some marketers have joined the main bank’s staff.)

Where customization counts, says Dickinson, is where the result will differentiate the offering from the pack. Among companies chosen for more than off-the-shelf offerings were Konrad Group, a noted digital design firm, and Deloitte Digital, to help the fledgling bank with its customer-facing front end.

In a LinkedIn blog series about his experiences launching EQ, Dickinson shares his finding that vendors prefer to be called “partners.” But he says there truly is a difference. He’s been pleased with the companies that got and keep EQ running, he says, but the off-the-shelf providers he considers to be vendors.

What, then, is a partner? He illustrates this by telling what happened when EQ’s embattled staffers were running on pizza and coffee.

Deloitte Digital had already been more than a vendor, Dickinson allows, because its experts and the bank had been building the front end from the ground up.

“That is more the two-way relationship of a partnership,” he says.

EQ Bank launched on a Thursday, and sometime over the weekend, Dickinson says, he and the team came to realize how much trouble they were in. Everyone battled on, but by the next Thursday, he called Deloitte for help.

“So they pulled a Level 6 Six Sigma black belt from a higher-paying client’s assignment,” says Dickinson. (Level 6 is the top of the business-process troubleshooting system’s scale.) This woman and two associates arrived on Saturday, piloted a revamped process on Sunday, and brought it up live on Monday. The backlog began to recede.

When that kind of thing happens, “you know you have a partner,” says Dickinson. “We’re not that big a bank.” 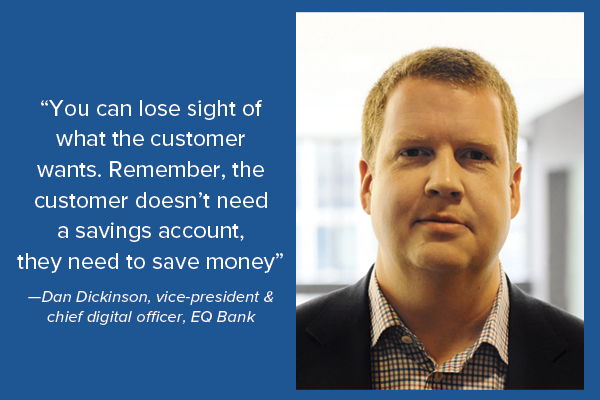 EQ Savings Plus allows account holders to make deposits in various electronic forms; pay bills manually and automatically; and transfer funds to and from other banks’ accounts. Customers can set up linkages between EQ and their accounts at other banks to facilitate routine transfers. And they can make instant transfers to friends and family who have EQ accounts. One element of the user interface is the ability to maintain sub-accounts for budgeting.

Dickinson’s staff is in Toronto. “I do a lot of my work virtually, but it is very handy, especially for problem solving, to be able to walk down the hall,” he says.

Interestingly, EQ customer contacts tend to be online, via human chat. “Our chats outnumber our calls,” he says.

“We picture ourselves as a challenger bank, and we need to leverage technology,” says Dickinson. His advice to others starting digital platforms: A good user experience is critical, but don’t get fancy.

“You can lose sight of what the customer wants. Remember,” he says, “the customer doesn’t need a savings account, they need to save money.”