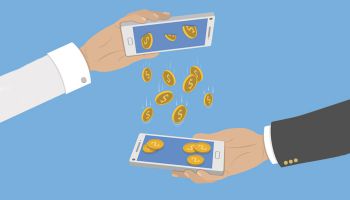 Technology from Mirador enables banks to compete online with the likes of Kabbage, OnDeck, and others—and with an advantage nonbank fintech lenders lack.

The cover of Tompkins Financial’s annual report bears the slogan, “Locally focused; A world of possibilities.” And that was part of the $6.2 billion-assets company’s thinking when it adopted a web-based commercial loan application system earlier this year that it calls “Lightning Loans.”

The company, with four subsidiary banks in New York and Pennsylvania, continues to do a traditional community banking business. Yet, just as every local retailer is potentially competing with Amazon and Walmart.com, Tompkins and other commercial lenders face competition from the likes of Kabbage and other business-oriented online lenders that promise fast online service with minimal hassle.

Clients increasingly want the same convenience from their local providers that they can obtain from such players. Kabbage, for example, promises up to $150,000 in business credit in ten minutes.

At Tompkins VIST Bank, a $1.6 billion-assets subsidiary, in Wyomissing, Pa., a new generation of clients has been rising to the top positions of local small businesses, according to Neena Miller, executive vice-president and chief credit officer. Miller says that the new generation wants the convenience of modern technology out of their local lenders, and Tompkins wanted to be able to provide faster service while maintaining their banks’ local connections with customers and prospects.

A year and a half ago, the parent company began evaluating web-based services from outside vendors that could help its subsidiary banks deliver what customers desired. What they found was a service that could integrate with their existing systems and credit standards—as a pure technology play, not a substitute for the bank’s own lending.

In January the company began rolling out Lightning Loans, beginning with the Tompkins VIST affiliate.

Miller says the bank has been promoting the new service in a low-key manner initially, using digital advertising, social media, and its website and the many “feet on the street”—branch officers and calling officers—that the bank uses to reach out to business customers already.

Miller says the new service has been well-received. Customers can access Lightning Loans directly through the bank website and fill out the application on handhelds and computers. Lenders can assist those who want help by easily accessing the service on the banker’s application dashboard that is designed to aid the borrower.

“We’re still a community bank and we are still working to be high-touch with our customers,” explains Miller, a 30-year banking veteran.

Not your old loan application

Miller says that what the bank did not want was simply an online version of the traditional paper application formerly used. That would have been cumbersome and not the faster experience that customers wanted. Instead, the bank selected offerings from Mirador, a technology company based in Portland, Ore.

Mirador streamlines the up-front aspects of applying for credit and tailors its online process to the needs, policies, and credit practices of the client bank.

Trevor Dryer, co-founder and CEO, says Mirador seeks to get away from the traditional structure of credit applications. One element of this shift is not giving the customer the choice of what type of credit structure to apply for. Dryer says that customers usually don’t know what type of credit—term loan, line of credit, etc.—would serve their need. The Mirador approach is to get the customer to describe what they need and how much they need. The system adapts as it goes, to fit that need to the products the bank offers.

This in turn drives the types of information requested from the applicant and the supporting documentation that needs to be provided. By contrast, the traditional loan application process typically requires borrowers to bring a stack of paper—tax returns, company financials, and more—to their appointment with a banker.

Mirador’s approach adjusts as the process moves on. Wherever possible, information is pulled into the system electronically, and, where doable, from online soures. For example, IRS information can be accessed along with way via the web.

Let’s say a pizzeria needs a new oven. Dryer says the software shunts the application process onto the appropriate “track” for an equipment loan. Only the information required to support such an application is requested or accessed automatically.

Banks have choices on how to use the Mirador software. “We urge banks to automate as much as they can,” says Dryer. “We want the banks to automate the easy ‘no’s’.” For instance, if you try the Lightning Loan process through the bank’s website, an out-of-market applicant is quickly told, through use of its zip code, that the bank isn’t currently lending in that geographic area.

“Something we really appreciate is the ease of gathering information, for our clients,” says Miller. Customers can typically complete the application process in six or seven minutes, she explains. (The bank’s website promises a 15-minute process, but generally the experience is faster. The site promises decisions “in days. In many cases, even quicker.”)

Miller says that the bank’s small business loans generally fall within the range of credit that can be granted on an individual credit officer’s lending authority, so it is not necessary for the online applications to go to loan committee for approval. Of the approximately 100 loans Tompkins VIST Bank has processed through the system thus far, she says, all have been for typical small business credit needs.

“I don’t see the needs of our clients changing,” Miller continues. “This is bread-and-butter community bank lending.”

While the Mirador-implemented Lightning Loan process provides much of the speed promised by online marketplace lenders, Miller points out that there is an important difference between her company’s offering and that of companies like Kabbage: rates.

Such online lenders offer speed, but their pricing is often higher.

She says that the bank hasn’t been able to measure the local impact of marketplace lender competition, but clearly customers want an experience like that offered by such players. An offering like Tompkins’ suggests the best of both worlds.

Mirador’s Dryer says that the young company has signed up larger organizations, somewhat earlier than expected. Both regional and superregional banks are among those that the company has been bringing on board.

Each client relationship is “built from the ground up,” according to Dryer. How the bank chooses to use the company’s technology varies from one bank to another.

Tompkins, for example, pulls data from Mirador into its existing systems, currently without an API. Dryer says with this approach some clients have been able to get programs underway within 30-90 days and it allows for a more in-depth integration to follow the initial set-up. Tompkins has not yet integrated, but is planning to do so.

“Instant response is becoming the expectation of both consumer and commercial customers,” says Dryer. Some clients have been setting things up to provide online initial decisions, while others offer online pre-approvals. One client, he adds, is looking at providing instant online approval, along the lines of a Kabbage and similar competitors.

Abandonment is an ongoing challenge for online application processes, and Dryer says that abandonment rates vary in accordance with the individual bank’s setup. Some lenders have unusual information requests—asking for a resume for the company’s principal, for example—and sometimes applicants don’t have that right at hand.

Tompkin’s approach stores applications that are partially completed, and the website offers the opportunity to pick up where an applicant left off. (Tompkins’ site asks the applicant to set up an online identity and password early in the process, for accessing applications in progress. The site says that partial applications will be maintained on the system for 30 days.)

Mirador already offers a “second-look” option to lenders that permits other lenders to consider applications not suitable for the original bank’s portfolio, while enabling the bank to maintain its customer connection.

Instant borrower gratification, says Dryer, is the future norm, especially for smaller-dollar commercial loans. Mirador will be expanding its offerings, too. Dryer says that a commercial real estate lending application will be launched soon.