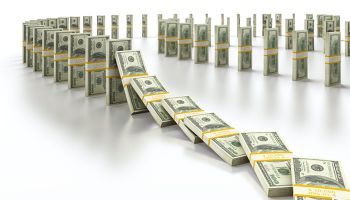 Many U.S. banks reaping the benefits of tax reform are investing in higher minimum wages and bonuses for employees, triggering a domino effect of competitors also increasing compensation to protect their talent.

Between Dec. 20, 2017, and Jan. 11, 59 banks and thrifts announced increases to wages, bonuses, or both. While 36 companies raised wages, the other 23 opted to issue one-time bonuses instead of permanent wage increases. These companies were mostly concentrated in pockets of the country where costs of living are cheaper and the minimum wage is far lower.

Louisiana also has no required state minimum wage but New Orleans-based Gulf Coast Bank and Trust Co. decided to slightly increase its minimum wage to $12 per hour, which the company touted as one of the "highest starting salaries for unskilled workers in the state." 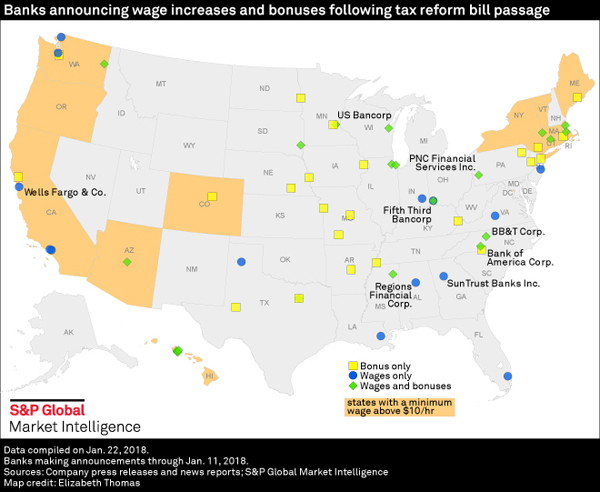 But in high-cost and competitive labor markets like Hawaii, banks raising minimum wages above the state minimum of $10.10 an hour were forced to bump compensation to keep their employees from taking their talent across the street.

The two largest banks by deposit share in the state's most populous city of Honolulu, First Hawaiian Inc. and Bank of Hawaii Corp., announced Dec. 22, 2017, that they would be raising the minimum wage for their hourly employees to $15 an hour. In the days that followed, three other banks, all with headquarters overlooking each other in downtown Honolulu, elevated their pay.

"In order to have any effect we had to at least match what the others were doing," Walter Ida, director of investor relations at Territorial Bancorp Inc., said in an interview. Ida said banks are competing for resources from a limited workforce, mostly because "we're in the middle of the ocean." Territorial announced Dec. 27 that the bank was increasing its minimum hourly rate to $15.

At Central Pacific Bank, Executive Vice-President for Human Resources Patty Foley said the tax reform bill allowed the company to bump its minimum hourly wage rate to $15.25. Foley wrote in an email that the slight bump above the other banks should "attract talent" in an otherwise "very tight labor market."

Following announcements from ASB Hawaii Inc. and Hawaii National Bancshares Inc., Honolulu's six largest banks, covering a total of 97.77% of deposit share in the metropolitan area, had all announced increases in the minimum wage to at least $15 an hour. 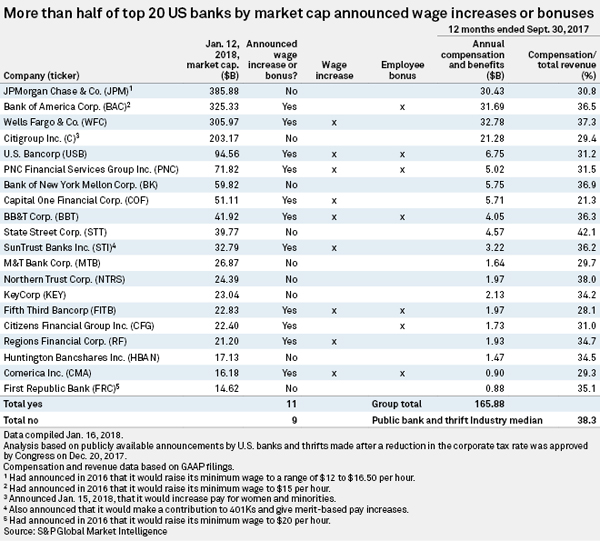 "There's a lot of follow-the-leader going on," FIG Partners analyst Christopher Marinac said in an interview. Marinac said that from an earnings standpoint, increases in employee pay are a "small difference" compared to what the companies stand to gain from the slashing of the corporate tax from 35% to 21%, adding that the announcements provide great public relations exposure.

Among the largest 20 banks by market cap, 11 announced wage increases or bonuses. Most of these 11 companies have relatively low levels of compensation as a percentage of total revenue.

Wells Fargo & Co. only spends 28.7% of its total revenue on employee compensation, compared to an industry median ratio of 36.2%. Wells Fargo was among the first to announce increases in its minimum wage.

At Dallas-based Texas Capital Bancshares Inc., the company announced that more than 900 of its 1,450 employees will receive $1,000 cash bonuses, but did not announce a bump in the minimum wage. Texas Capital President and CEO Keith Cargill said in an interview that the company has paid its employees a minimum of $15 an hour "for quite some time." Cargill said the company's focus on commercial banking and private wealth advising means that the company relies on higher-skilled workers that merit higher pay.

"The caliber of people we go after is what the market demands," he said.

Noting that wage growth has been a glaring weak point in an otherwise improving labor market, the White House has been quick to pedal the private industry's wage increases as proof that the tax reform bill will spur economic growth. Gary Cohn, National Economic Council Director and key architect of the tax reform bill, told Bloomberg News on Jan. 5 that minimum wage hikes were "exactly what we wanted to see."

"Those changes in the minimum-wage workers in these companies are permanent changes to the wage system," Cohn said.

Critics have argued that wage increases have been an industry trend for some time, and that banks have steadily increased levels of pay over the years.

JPMorgan Chase & Co., for example, did not react to tax reform with any wage increases or bonuses because the company had previously made commitments to raising its minimum wage. The Bureau of Labor Statistics says that tellers, among the lowest-paid workers in the finance industry, were already earning a median wage of $13.11 per hour in 2016.

Higher pay may also disguise the fact that the number of hourly employees at banks has been shrinking over time as the industry evolves past the brick-and-mortar model. The Bureau of Labor Statistics projects that during the period 2016 to 2026, the number of bank tellers will shrink by 41,700, or 8% of the current universe of tellers.

This article originally appeared on S&P Global Market Intelligence’s website on Jan. 22, 2018, under the title, "US banks spend some tax savings on pay bumps in fight for top talent"