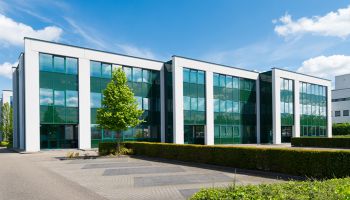 A wrinkle in office space is among the surprises this cycle—Millennials' like or dislike of a property's amenities can downgrade a formerly prime building and location.

While no serious problems appear to be on the immediate horizon for commercial real estate lending, and credit performance remains strong, analysts and regulators have been noting issues to monitor in this cyclical credit category.

Among these are the dependence of heavily concentrated bank CRE lenders on wholesale funding sources; a sense in some quarters that the credit cycle is due for a turn; a rise in less-experienced competition for some types of CRE credit; a slug of bank capital needing deployment; and a combination of factors leading bank CRE lenders to reduce loan pricing.

Some observations on CRE markets from active participants:

• “Earnings expectations are good, but you feel nervous; we are defying gravity with this cycle.”

• “The fundamentals of real estate remain strong. The balance between supply and demand in almost every sector is healthy. Debt and equity for real estate as an asset class remains abundant. Fears about political certainty, trade wars, and interest rate increases are having some impact and creating a manageable amount of uncertainty.”

• “We see lots of liquidity chasing fewer deals in the market today.”

These come from the second quarter Real Estate Roundtable Sentiment Index, and is based on a survey taken in April and released this month.

The comments illustrate what other current research is indicating: The commercial real estate lending sector appears to be healthy at present, but there is caution and some skepticism based on this loan category’s historical performance.

CRE lending contributed to multiple bank failures during the Great Recession. There is some easing in CRE lending terms being reported, including both pricing and maximum loan size. However, seasoned CRE lenders appear to be applying some of the lessons of the last downturn even as some relative newcomers pursue growth.

The sentiment survey’s index came in at 51, a three-point drop from the first quarter survey.

“Awareness of the length of the current cycle and trepidation about economic conditions in 2019 has led to a general feeling of cautiousness,” the survey report stated. “That said, availability of affordable financing and plentiful equity for the best quality investments are driving continued investment activity.”

About half of the survey sample—48%—said they felt the CRE markets were in about the same shape as in 2017’s first quarter. The same percentage said they expect no significant change in the first quarter of 2019. 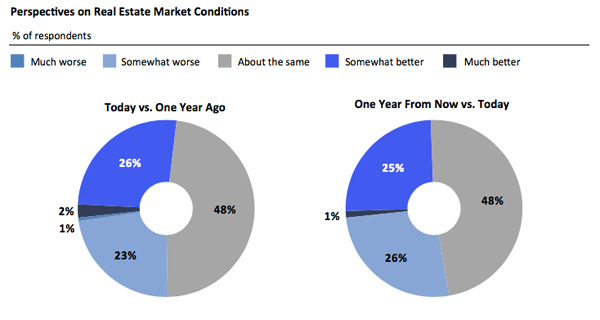 “Despite rising costs of construction, development continues somewhat unabated,” the report stated. “There are multiple factors which should be depressing development, such as rising construction costs and aggressive rent growth assumptions, but development activity continues to be strong.”

One potential reason for this trend cited by the report is Millennials’ preferences in work environments.

“The new generation of office employees is demanding a different experience than office workers of old,” one survey respondent said. “What would have been a Class A building in a Class A location is now in an undesirable area and downgraded for a lack of amenities. The upside—demand for new space is good for the industry.”

The report also indicated that many survey participants believe that asset values are peaking for most types of commercial property and that they will be down in 2019 compared to 2018. 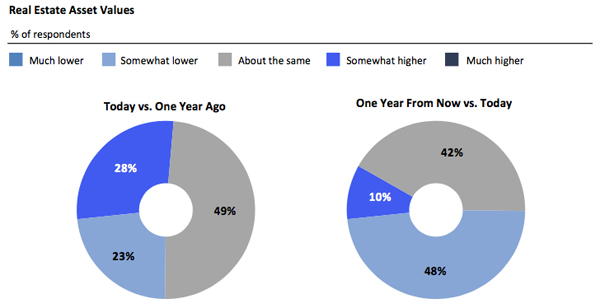 What stock analysts are saying

A recent podcast by banking analysts at Keefe, Bruyette & Woods, Inc. reviewed trends seen in first quarter reports and earnings calls among the banks followed by the firm.

“This was a really tough quarter for many of our CRE lenders, for a variety of reasons,” said Collyn Gilbert, managing director and analyst of midcap banks in the Northeast at Keefe, Bruyette & Woods, during the podcast.

One factor was growth—that is, the lack of it. Gilbert said that CRE balances were either flat or down in the quarter. This was due to some seasonal slowness; a more robust fourth quarter, during which many customers seemed intent on getting deals done by yearend; and accelerated paydowns of outstanding balances as borrowers tried to avoid the impact of rising rates.

Another factor was lowered pricing in response to lower growth. Anxious lenders tried to buy growth.

“Now they desperately need to deploy [that capital] to generate higher returns,” she said. “Because of this need, or desire to grow, many banks are offering below-market rates to drive loan growth.” Gilbert added that tax savings from federal relief efforts has also played a role in supporting cheaper CRE loan pricing.

Finally, some lenders, more disciplined than most, she said, “tended to move to the sidelines and observe the feeding frenzy that was occurring, before determining their appetite for growth and at what return level.”

Gilbert did strike one optimistic note. “While 1Q18’s trends seemed particularly painful for many of our CRE lenders, commentary late in April suggested that pipelines were building nicely again, and at better terms,” she said. “So we’ll see how much of that actually flows through into 2Q18 results.”

KBW’s Chris McGratty, who leads the firm’s small and mid-cap bank research team, said that “from a credit perspective, overall trends remain very healthy for the banks with portfolios continuing to perform quite well.”

McGratty added that while there is close attention being paid to retail CRE—“given the Amazon effect, if you will”—not much trouble has shown up in this portion of bank CRE portfolios, thus far.

Funding may make a difference

In a recent report, CRE Concentrated Banks—Not All Created Equal, Fitch Ratings said that as rates rise and deposit competition heats up, stable deposit funding will be a primary differentiator and a competitive advantage for CRE-concentrated banks.

“For most, but not all, CRE banks, a limited company profile and focus on underwriting broker-sourced CRE loans often translate to more transactional lending relationships and less core funding relative to the more relationship-focused banks,” Fitch’s report states.

The report said that the firm believes that “this drives most CRE banks’ reliance on wholesale funding and non-core deposits relative to more diversified and relationship-focused peers.” The report was based on banks that either have 300% or more of risk-based capital invested in construction loans and tenanted CRE loans or 100% or more of risk-based capital in construction and CRE loans.

The report found that these banks typically make heavier user of Federal Home Loan Bank advances than do comparable banks not concentrated in CRE.

The CRE lenders often have higher than average loan-to-deposit ratios and less liquidity on their balance sheets. “Fitch views this as more of an earnings risk than a liquidity risk,” the report said.

Regarding credit risk, the Fitch Ratings report noted that on average, credit losses at CRE-concentrated banks have been lower, consistently, than the rest of the industry, and that these banks have demonstrated their underwriting ability through multiple cycles. However, the report indicates that newer players without that track record have been attracted to CRE in this lengthening cycle.

“The new entrants’ core competency in CRE lending remains to be tested through a credit stress,” said the Fitch report.

Troubles of the financial crisis era due to construction lending losses resulted in Basel 3 rules that apply tougher capital requirements to high volatility commercial real estate (HVCRE). These rules would be eased by the banking package that passed the Senate in March, which the House has pledged to take up before Memorial Day weekend. (After initial resistance to the Senate package, House leadership agreed to a vote on it in exchange for consideration of financial bills that have already passed in the House concerning matters not taken up by the Senate.)

In a section concerning credit changes made over the last year, the Fed document stated: “Banks reportedly eased important lending terms, including maximum loan size and the spread of loan rates over their cost of funds, across all three major CRE loan categories—that is, construction and land development loans, nonfarm nonresidential loans, and multifamily loans. Almost all banks that reportedly eased CRE credit policies cited more aggressive competition from other banks or nonbank lenders as an important reason for easing.”

The report indicated that this was more common among nonfarm nonresidential loans and multifamily loans.

The increasing appetite for CRE loans on the part of lenders contrasts with another finding in the report:

The report indicated that answers from small and large domestic banks regarding borrower demand were similar.