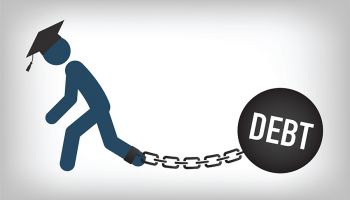 In an election season, banks and other sources of lending often take a beating, particularly from politicians on the left quick to remind voters of previous real or perceived infractions. One of the latest topics is student loan debt that many politicians are saying should not be paid back. It is a real concern, as students do struggle with the idea of paying back a loan for something that often does not yield a comparable financial result to justify the cost.

However, there is a solution that can make sense for the lender and the taxpayer called an “income share agreement.” The way it works is that investors give to a college so that it can fund a free education for some students. After the students graduate, they have to give a percentage of their earned salary over time.

The concept is that schools must be partially responsible for the work that the degree yields in terms of salary but students do not have specific student loan debt. The amount the student pays can depend on what they study. For instance, a liberal arts degree graduate might have to pay 5% over 100 months whereas an engineer major might pay 4% of 80 months due to the potential of a higher salary.

The structure can also help students consider the value of the degree they decide on. It is a similar philosophy to investing in startups.

So why would a college agree to a risky structure when they can be assured of a payment by a traditional loan? The answer is not just because of any perceived threat from politicians. Many colleges, particularly small liberal arts colleges with high tuition costs are struggling to attract applications due to high fees in comparison to state schools and online courses.

In order to attract students, colleges are stepping up the push from donors, not for new buildings, but to increase tuition aid for qualified students. They are looking for answers to a model that seems to be under threat. Loan structures such as this could potentially attract more student applications.

Some politicians are looking to just have the government handle student loans. This would be a foolish model for not only the university but for the work force. The last administration attempted to cut out banks and claimed it would save tax payers tens of billions of dollars on legislation that was passed….instead, it of course increased taxpayers’ burden.

Banks and insurance companies are in the business of assessing loan risk, and the government is not. The solution for both colleges and students can come from innovative ways to share risk in the open market.