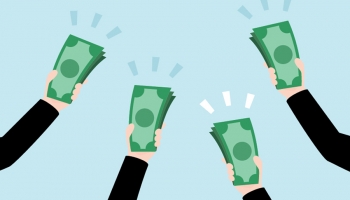 Banks across America have donated more than $585 million to local, national and international charities and non-profit organizations during March to help communities affected by the spread of the COVID-19 coronavirus.

Banking Exchange collated data from company releases and the American Bankers Association and found that 34 US banks have donated $586.1 million between them. Four Canadian banks have donated a total of C$4.75 million (US$3.3 million).

The figure does not include loans made through government-backed support programs and does not include the financial value of other measures taken by banks, including fee waivers, removal of penalty charges, and payment deferrals.

Wells Fargo donated $185 million to organizations including Feeding America and housing and healthcare charities, as well as its own WE Care Fund to support employees in financial hardship.

“The coronavirus is disrupting the daily lives of many people around the world, and Wells Fargo has taken — and will continue to take — the steps needed to support our customers, employees and communities during this difficult time,” said CEO Charlie Scharf. “We will continue to evaluate this fluid situation and take additional action as necessary.”

Bank of America has pledged $110 million in total to local organizations in the US and other countries in which it operates.

Capital One announced on March 27 that it was committing $50 million to “trusted non-profit partners” to address “crucial needs of the most vulnerable populations”. It has also introduced a corporate matching program for staff making personal donations. JP Morgan Chase has pledged a similar sum to local and national causes.

Goldman Sachs, Truist, and HSBC have all pledged $25 million each to a variety of regional, national and international causes related to the pandemic.

Most recently, FNB Corporation – the parent company of First National Bank – gave $1 million to its foundation to be donated to local organizations throughout the states in which it operates.

On top of charitable donations, Bank of America has committed $250 million to community development financial institutions in the form of loans through the US government’s newly established Paycheck Protection Program.

Other banks are preparing to participate in the program, introduced as part of the CARES Act support package for the US economy during the pandemic. It is designed to help small businesses stay afloat during the fall in activity caused by isolation and “social distancing” measures.

In Italy, one of the worst affected countries, prime minister Guiseppe Conte has reportedly extended a strict lockdown until at least May 1, although restrictions may be lifted gradually after this date.