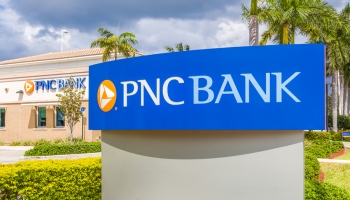 PNC Financial Services is to sell a $17 billion stake in BlackRock, the world’s largest asset manager, it announced this week.

PNC, one of the biggest banks in the US, currently holds 22.4% of BlackRock’s shares and has backed the asset management company since 1995, four years before it was listed on the New York Stock Exchange.

BlackRock said it would buy back roughly $1.1 billion worth of stock from PNC as part of the transaction.

PNC said it would transfer 500,000 shares to its foundation by the end of the second quarter.

PNC chairman and CEO William Demchak indicated that PNC could reinvest the money into opportunistic acquisitions.

“As good stewards of shareholder capital, we have consistently reviewed options to unlock the value of our investment,” he said.

“We feel the time is now right to do just that, realizing a substantial return on our investment, significantly enhancing our already strong balance sheet and liquidity, and leaving PNC very well-positioned to take advantage of potential investment opportunities that history has shown can arise in disrupted markets.”

This contrasted with comments made by Demchak at an investor conference in September 2019, when he said smaller banks were “wildly mispriced” and larger deals were often not worth the integration costs.

PNC’s last major acquisition was of the Royal Bank of Canada’s US retail banking operations in 2012, in a deal worth $3.45 billion.

It bought National City in 2008 in a deal worth $5.2 billion, which almost doubled the size of the company and established it as one of the 10 biggest banks in the US.

In addition, Demchak said the sale would reduce the regulatory burden on PNC that was linked to its large stake in another financial services company.

Herman Chan, analyst at Bloomberg Intelligence, wrote in a commentary that “the bolstered capital levels reinforces PNC as a safe-haven bank that stands ready to capitalize”.

During the period of PNC’s association with the BlackRock, the investment giant’s assets under management have grown exponentially through acquisitions and organic growth. At the time PNC bought its stake BlackRock managed approximately $23 billion, according to a Bloomberg report this week. By the end of March, it ran $6.5 trillion.

As well as one of the biggest managers of mutual funds globally, BlackRock is also a leading provider of exchange-traded funds – chiefly as a result of its purchase of Barclays Global Investors, now known as iShares, in 2009.

This year the company’s advisory unit was appointed by the Federal Reserve to oversee its bond purchase program, part of its massive stimulus package for the US economy.