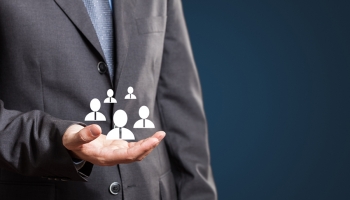 Greg Sigrist has joined Metropolitan this week, and will become chief financial officer on September 4, 2020. He replaces Anthony Fabiano who will retire as CFO on that date.

Sigrist joins from Washington-based Columbia Banking Systems where he was CFO, and he has previously worked in banking for Morgan Stanley and Citigroup, and in audit roles for EY and McGladrey & Pullen.

Dixiana Berrios has joined as COO, having previously been director of operations at Amalgamated Bank. She also spent several years at Sterling National Bank in a variety of roles.

Customers Bank – Eric Holmquist has joined Customers Bank as chief risk officer. He has more than 35 years of financial industry expertise, and was most recently a managing principal for enterprise risk management at global consultancy firm Capco.

In his new role, Holmquist will be responsible for the design and execution of the bank’s enterprise risk management program and practices, Customers Bank said in a statement.

He previously held senior positions at FIS, Assume Partners, Advanta Bank, and other financial institutions, as well as managed a financial advisory practice.

Bryan previously served as CISO for the National IT Organization of the Federal Reserve System, where he was responsible for ensuring the effectiveness and efficiency of the Federal Reserve's information security policies, architecture, programs and incident response team. He has also worked for ADP, the Internal Revenue Service and the US Air Force.

Federal Home Loan Bank of Chicago – FHLBank Chicago president and CEO Matthew Feldman is to retire at the end of this year after 17 years with the bank, 12 of which as chief executive.

John Reinke, chair of FHLBank Chicago’s board, described Feldman as “an iconic, highly principled, greatly admired leader who has profoundly affected us in many positive ways”.

Ericson has been COO since January this year, and has worked for FHLBank Chicago since 2005, including as group head for members and markets and chief risk officer.

Gateway First Bank – The $1.7 billion bank based in Oklahoma has appointed Jeff Weiner as chief information officer, tasked with evaluating Gateway’s existing technologies and processes and streamlining them to improve the customer experience.

Gateway CEO Scott Gesell said the bank’s technology was “one of the key building blocks” for the company and “quickly becoming one of our core competitive advantages”.

Weiner joins from fintech giant Fiserv, where he was also chief information officer.

Bank of Southern California – The San Diego-based community bank has hired Thomas Dolan to the newly created position of chief strategy officer. He will be responsible for leading the company’s strategic initiatives, compliance, investor relations, and new business plans.

Dolan has worked in the banking sector for 37, most recently in COO and CFO roles, the bank said in a statement.

The Victory Bank – Jon Swearer has been promoted to chief credit officer of The Victory Bank following Eric Offner’s retirement. He has worked for the bank since 2013 as commercial relationship manager, and has previously worked in small business lending at National Penn Bank.

Gallion has overseen the development and growth of small business lending at several regional and national banks, most recently Radius Bank in Chicago. She has also worked at Bank of America, Comerica, First National Bank of Arizona and Wells Fargo. Gallion also sits on the board of the National Association of Government Guaranteed Loans.

Five Star Bank – Timothy Perrotta has been named director of human resources, responsible for all the bank’s HR functions. He joined New York-headquartered Five Star Bank in June 2018 as manager of total rewards, and was previously compensation administration manager at Wegmans Food Market.

Regions Bank – Paula Drake has been appointed chief communications officer for the S&P 500-listed banking giant. She joins from Home Depot where she worked for 16 years, most recently as corporate and executive communications director.