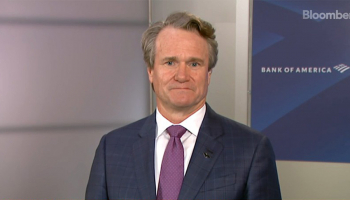 Bank of America (BoA) has added five new senior leaders including three women to boost the diversity and knowledge base of its management team.

The additions are part of a raft of changes to help manage forthcoming retirements and departures and were set out in a letter to staff from chairman and CEO Brian Moynihan on Friday.

“Our management team going forward will include individuals with many years of outstanding leadership in our company and the industry, increased global and international expertise, and more diversity of gender and race than ever before in our history,” Moynihan said.

“Leaders who are assuming new and expanded roles on the team have deep and broad experience in different areas, while firmly sharing a commitment to drive our company and responsible growth through its second decade.”

Alastair Borthwick has been named chief financial officer with effect from the fourth quarter of this year, replacing Paul Donofrio, who is to become a vice chair of the company and lead its sustainable markets committee.

Borthwick has been the bank’s head of global commercial banking for nine years and is also vice chair of BoA’s Global Diversity & Inclusion Council. He joined the company in 2005 as head of global investment grade debt capital markets.

Donofrio has been CFO for more than six years, but wanted to “contribute to our organization in new ways”, CEO Moynihan said. In his new role, Donofrio “will steward our efforts in support of our $1.5 trillion sustainable finance commitment”, Moynihan added.

Chief technology and operations officer Cathy Bessant is to transition to vice chair of global strategy, based in Paris, France, and will work closely with the boards of BoA’s European subsidiaries.

Her current role will be split into two, with Aditya Bhasin named chief technology and information officer, responsible for designing and delivering technology solutions for all lines of business.

Alongside this, Tom Scrivener has been named chief operations executive. In this role he will oversee the delivery of “integrated operations solutions for all lines of business”, as well as continuing to oversee the bank’s Paycheck Protection Program loan forgiveness work.

Meanwhile, Matthew Koder, currently president of global corporate and investment banking, will continue in his role with additional responsibilities for global transaction services, which he will take on from chief operating officer Thomas Montag, who will leave BoA at the end of this year.

Holly O’Neill, previously chief client care executive and head of consumer client services, has been appointed president of retail banking, while Wendy Stewart is the new president of global commercial banking. She was previously co-head of that department and head of wholesale credit strategy.

Among the departures are Sanaz Zaimi, head of fixed income, currencies and commodities sales as well as CEO of BoA Securities Europe and country executive for France. She plans to leave at the end of this year “to pursue other interests”, Moynihan said.

In addition, global general counsel David Leitch is to retire in 2022 after six years in the role. He has been succeeded by Lauren Mogensen, and has taken up the role of vice chair until his departure.

Mogensen was previously head of global compliance and operational risk at BoA and has worked for the bank for more than 10 years in various legal and risk roles.

Andrea Smith is also set to retire from her role as chief administrative officer at the end of 2021 after 34 years with Bank of America. She plans to set up and chair a new Bank of America Alumni Council “focused on connecting and engaging retirees and former employees of the company as clients, advocates and community leaders”.

Smith is to be replaced by Steve Boland as chief administrative officer.

In a statement, the bank said: “When all of the changes are complete, Bank of America’s senior management team will include individuals with an average of 21 years of service in the company and 31 years in the financial services industry, with increased global and international expertise; and more diversity of gender and race than ever before in the company’s history.”