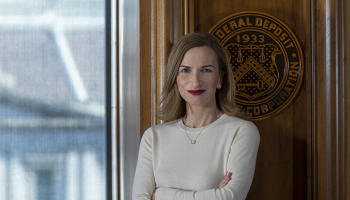 Federal Deposit Insurance Corporation (FDIC) chairman, Jelena McWilliams, has announced she will resign from the agency on February 4, after a conflict among FDIC directors over the power of the agency’s chairman and board.

In late 2021, following a purported notational vote, at least two other FDIC directors called for a request for information about the agency’s procedures for reviewing bank mergers, sidelined by McWilliams as chairman.

In a December Wall Street Journal op-ed McWilliams described the efforts as a “hostile takeover of the FDIC internal processes, staff and board agenda”.

According to the ABA, McWilliams and the FDIC’s general counsel argued that the agency’s chairman is in charge of the board’s agency and the activities of the FDIC.

In her resignation letter to President Joe Biden, McWilliams said: “Throughout my tenure, the agency has focused on its fundamental mission to maintain and instil confidence in our banking system while at the same time promoting innovation, strengthening financial inclusion, improving transparency, and supporting community banks and minority depository institutions, including through the creation of the Mission Driven Bank Fund.”

McWilliams served as the 21st chairman of the FDIC since June 2018 and is expected to resign effective February 4, 2022. She is set to be replaced by former FDIC chairman and current board member Martin Gruenberg.

In the past year, McWilliams has overseen a fund launch to support underserved communities backed by an initial commitment of $120 million, outlined time concerns for climate report recommendations and worked on greater clarity around crypto assets.

“Her efforts during the ongoing pandemic have allowed banks of all sizes to serve as a source of strength for the economy, while maintaining their commitment to safety and soundness,” said Nichols.

“We appreciate her willingness to listen to all stakeholders in addressing policy issues, and particularly appreciate her strong support for initiatives to reduce the number of unbanked Americans and promote financial inclusion.”