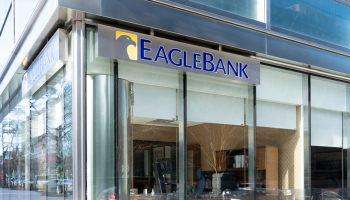 The Securities and Exchange Commission (SEC) and the Federal Reserve Board have collectively fined a Maryland bank and its former CEO more than $23 million for lending rule breaches.

The regulators announced last week fines and penalties totalling $22.9 million for EagleBank and $521,000 for its former CEO and chairman Ronald Paul.

EagleBank was fined $9.5 million by the Fed for “improperly” lending almost $100 million to “entities owned or controlled by” Paul between 2015 and 2018. The bank was found to have “deficient internal controls over insider lending practices”, the Fed said in a statement.

The deficiencies resulted in lending staff allowing Paul to “participate in matters in which he had a conflict of interest”, the Fed said, while “third-party risk management deficiencies over the same period… resulted in inadequate oversight of contracts between the bank and a local government official”.

The SEC’s statement detailed that a December 2017 short-selling report flagged “significant undisclosed loans” to Paul’s family trusts. Both the then-CEO and the bank made “false and misleading statements” in public communications that the loans were not related party loans. After EagleBank’s auditor and regulator confirmed that they were, the bank still failed to disclose them in its 2017 annual report, the SEC said.

EagleBank’s parent company, Eagle Bancorp, has not admitted or denied the SEC’s findings but has agreed to pay disgorgement of $2.6 million, prejudgment interest of $750,493, and a civil penalty of $10 million, on top of its fine from the Fed.

Last year, EagleBank’s former general counsel Laurence Bensignor was banned from the banking industry by the Federal Reserve for “his role in EagleBank’s unsafe and unsound lending practices”, the Fed stated.

In a statement, Susan Riel, EagleBank’s current CEO, said: “We are pleased that the SEC and [Federal Reserve Board] have approved the settlements and we can now put these legacy matters behind us and continue our focus on running one of the most profitable community banks in the Washington, DC region.

“I would like to thank the entire EagleBank team for their unwavering support and dedication in continuing our mission of being a leading community bank in the region by doing what we do best, supporting our clients, our community, our employees, and our shareholders and putting relationships first in all that we do.”