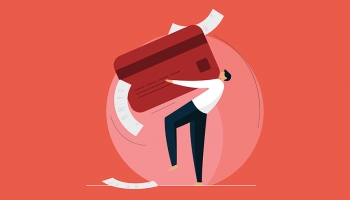 Even “financially healthy” Americans are concerned about the impact of rising inflation, according to new surveys.

Research by JD Power, published at the end of August, shows that more than two-thirds (70%) of retail bank customers are affected by inflation, with many turning to credit cards to help offset increasing costs.

However, the market research group also found that almost one in five of the 4,000 people it surveyed were unaware that borrowing more through increased credit card usage could affect their credit score, with this proportion higher in the “financially vulnerable” and under-40s groups.

Respondents also indicated a low level of confidence in their ability to cope with higher prices and falling satisfaction with their financial situation, JD Power reported.

However, US banks had a “golden opportunity” to provide guidance and advice in the right way, the researchers wrote.

“Banks need to be able to effectively steer customers into programs that can help with each unique individual financial situation,” JD Power’s research stated. “Banks need to understand customers’ motivation to find their best path forward. Those that do will be rewarded for their effort in the form of customers that are both more financially healthy and more likely to engage with that bank in the future.”

Other surveys have also laid bare the impact of higher prices. Research by USAA found that a majority of its respondents had “reduced household spending in many areas except when it comes to retirement savings and life insurance”.

However, a significant proportion of people said they were concerned about how inflation would reduce their spending power in retirement.

Meanwhile, research by State Street Global Advisors (SSGA) found that almost half of those surveyed reported that rising inflation was causing them stress and anxiety. In addition, a majority of investors said they believed the US would enter a recession within 12 months.

SSGA’s Inflation Impact Survey also reported that respondents had cut discretionary spending, while more than a quarter (29%) had reduced their spending on essentials such as groceries or fuel.