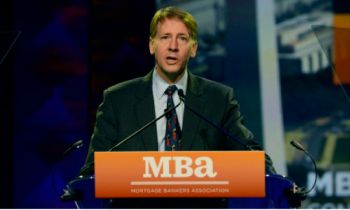 At the Mortgage Bankers Association (MBA) annual convention held in San Diego this fall, Consumer Financial Protection Bureau Director Richard Cordray fired a warning shot across the bow of lenders who use marketing service agreements (MSAs). He confirmed what many had deduced from the agency’s recent enforcement actions: The bureau views MSAs, which allow mortgage and title companies to pay for marketing services, as potential violations of RESPA’s prohibition on referral fees. “The bureau is concerned about MSAs’ ability to evade RESPA,” Cordray said.

Many lenders and their legal advisers say CFPB’s view sets aside four decades of precedent, with harrowing implications. Mitchel Kider, chairman and managing partner of Weiner Brodsky Kider, told conference attendees that RESPA Section 8(a), which bans kickbacks in real estate settlement services, “is a dangerous statute for everyone in this room because you’re not only liable for civil penalties if you’re deemed to have violated it; you actually committed a crime.”

At least that section of RESPA is clear—stating that no one can give or accept anything of value pursuant to anyone referring business. But Section 8(c) recognizes that real estate professionals provide services for which they’re entitled to be paid, and says that the ban on referral fees shall not be construed to prohibit payment of a salary or compensation for services actually performed. Since the law’s enactment in 1974, that section has consistently been interpreted as a safe harbor.

The Department of Housing and Urban Affairs reaffirmed in its 1999 Policy Statement that ‘‘Congress never intended payments by lenders to mortgage brokers for goods or facilities actually furnished or for services actually performed to be violations . . . of RESPA” and reiterated most recently in 2010 that MSAs are permissible.

But in 2011, oversight of RESPA was transferred to CFPB, and the safe harbor became shark-infested waters. “The language didn’t change, but the CFPB says 8(c) isn’t an exemption,” Kider said. “You can pay someone for services rendered or space provided, but if the CFPB finds out you are getting referrals from that business, you’re in trouble.”

Historically, the way to demonstrate that payments weren’t kickbacks was to pay fair market value for all goods and services. But CFPB says if there’s a referral, it doesn’t matter if fair market value is being paid. “Their analysis is questionable, and one court has already rejected it,” Kider said, “but lenders must be aware of the CFPB’s interpretation and assess their MSAs accordingly.”

Panelist Matthew Sheldon, a partner at Goodwin Procter, said the case of Lighthouse Title was CFPB’s first enforcement action regarding MSAs and an indication of its aggressive stance. CFPB alleged that Lighthouse Title entered into MSAs because it believed if it didn’t, counterparties would refer their business to other companies, and that more business was referred when they had MSAs. “But what it doesn’t do is tell how any of these factors should be weighed,” Sheldon said. “For Lighthouse, there was a $200,000 civil penalty, immediate termination of all current MSAs, and a prohibition on any new MSAs.”

In enforcement action brought by CFPB against PHH Mortgage, an administrative law judge found a RESPA violation and assessed $6 million plus certain equitable relief. Cordray increased the award to $109 million. “The ultimate decision always goes to Cordray,” Sheldon explained. “He said the administrative law judge got it all wrong, because if there are payments being made—even for legitimate services at fair market value—you can’t do it if referrals are happening. That changed 40 years of RESPA interpretation. According to Cordray, payment must be solely for service actually being provided on its merits and cannot be tied in any way to a referral or business.”

No guidance on compliance

Perhaps most disconcerting, there is essentially no guidance from CFPB on how to operate an MSA to the bureau’s satisfaction. The Compliance Bulletin issued on Oct. 8 provided no additional guidance on Section 8(c). Indeed, it stated that “while some guidance may be found in the bureau’s previous public actions, the outcome of one matter is not necessarily dispositive to the outcome of another.” To be told that you can follow the bureau’s precedent and still not have your MSA deemed compliant “is not exactly comforting,” Sheldon said. Part of the problem, he explained, is that you can align your MSA with today’s best practices, but CFPB isn’t just going to look at what you’re doing today; it wants to know what was going on when the MSA was created.

Sheldon said it is also troubling—and revealing—that the Compliance Bulletin describes MSA monitoring as “inherently difficult.” He added: “That’s scary when the regulator is openly doubtful that you can monitor this program adequately. Read that as, ‘This work [of taking action against MSAs] is not yet done.’” Mortgage bankers are in an almost untenable position because businesses judge their marketing success by how many referrals they get. “You want to judge how effective your marketing is,” Sheldon said, “but you must be very careful in how you do that.”

Burton Embry, executive vice-president and chief compliance officer for Primary Residential Mortgage, Inc., said that especially for small- and mid-sized companies, MSAs serve an essential function. How else can lenders that aren’t behemoths like Chase or Quicken get their name out to potential homebuyers? “I want to put my dollars in a Realtor’s office or a builder’s office,” Embry pointed out. “People are there because they’re looking to buy a home. So there are business considerations.”

Yet the legal concerns are daunting. Embry said he asked a CFPB regulator why lenders can’t get guidance on how to run a compliant MSA. “He told me—and I’m paraphrasing—‘Well, if we don’t like them and don’t think they’re necessarily legal, how can we give you advice?”

In the absence of clear guidance, mortgage bankers can derive from CFPB’s actions some practices to avoid, Sheldon said. Among them:

• Don’t enter into MSAs to prevent referrals to competitors;

• Don’t evaluate MSAs’ continuation or payments based on past referral volume.

Kider advised knowing what your capture rate is from your MSA partners. “That’s how the CFPB builds its cases,” he explained: If you’re getting referrals, you must be giving kickbacks. “What the CFPB has done is wrong,” Kider maintained. “You don’t just change something after 40 years. I believe this will be set aside in the courts, but what do you do in the meantime?”

Ken Markison, vice-president and regulatory counsel for MBA, said the association is encouraging companies to reconsider MSAs, as well as any plans to establish new ones. “The CFPB’s position essentially is that MSAs serve to disguise kickbacks and referral fees,” he said, “and it offers not one example of a properly constructed MSA.”

The risks are very high, panelists agreed. Be sure the rewards are worth it.