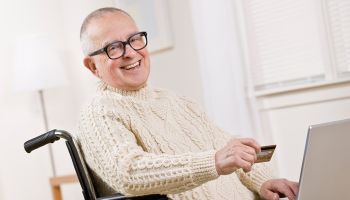 With one in five un- or underbanked households in the United States headed by working-aged individuals with disabilities, judicious use of technology could bring economic inclusion.

So said FDIC Chairman Martin Gruenberg at a meeting of the National Disability Institute in Washington, D.C., recently.

Increasing such households’ access to safe, secure, and affordable banking services “improves their ability to build assets and create wealth, makes them less susceptible to discriminatory or predatory lending practices, and can provide a financial safety net against unforeseen circumstances,” Gruenberg said.

He cited statistics from a 2013 FDIC survey—the most recent available—that indicate almost half of households headed by individuals with disabilities rely on providers outside of the financial mainstream for some or all of their financial services. In response, Gruenberg pointed to various relatively new technological solutions that could address this issue.

However, the data indicate more could be done to encourage such use, specifically among households headed by individuals with disabilities. Less than 40% of these report having a smartphone and, even among banked households, those headed by an individual with a disability were only half as likely to use mobile banking relative to others (14% versus 30%)

“This difference suggests an opportunity to learn whether and how mobile technology can be better used as a tool for financial inclusion for individuals with disabilities,” Gruenberg said.

“Consumers using prepaid cards generally report that they received them from nonbank sources, but are using them to conduct the same sort of day-to-day transactions associated with bank accounts,” Gruenberg said. “It may be interesting then to learn that almost half, 46.5%, of unbanked households that used prepaid cards in the last year report that they are somewhat or very likely to open a bank account in the future.”

While FDIC’s data showed that, in general, one in five households that recently opened a bank account said a new job contributed to their decision. However, for those households headed by a person with a disability, the main reason they decided to open a bank account was because of the availability of direct deposit.

“Nearly half of recently banked households headed by an individual with a disability said they opened the account mainly to receive direct deposit of a paycheck or benefits. Taken together, these results suggest that interventions or product features designed to help households maintain and renew their banking relationships through economic challenges may reduce unbanked rates over time,” he said.