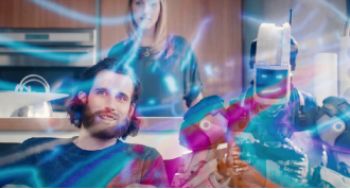 The time: The future, with gadgets, screens, virtual reality, and robots galore.

The scene: A small room in a small home.

The players: A wife who is pregnant, and her husband, who is not buckling down to fatherhood.

She wants him to get down to the business of helping to find a mortgage for their dream house. But he’s been spending his time building a “game-buddy” robot to help him score better on a mega computer game.

She returns home one day, tired and exasperated. She is greeted by an enthusiastic robot dog, who sits by her and gives her a house key.

The husband got it right after all.

That’s just part of a faux movie trailer for the new “film”: The Mortgage: The Future is Now.

The first clue that this video is not really a trailer for a real film comes right at the start, when the screen announces: “The following fake trailer has been approved for any audience interested in buying their first home.” The video, produced for both cinema showings and YouTube, garnered over 450,000 views in the first weeks of its posting.

Larry Jacobs, the head of marketing for RBC, predicts that the mortgage spot will have over a million viewings this year, and there’s every reason to think he’ll be right. The bank’s parody approach has already hit that kind of mark with an earlier spot.

The RBC video, which opens with a futuristic city scene—airships and rockets among tall buildings—promotes an imaginary sci-fi film featuring a Canadian couple. They, like their intended audience, are millennials facing the biggest events of their young lives: a new baby and the need to finance a home.

“Jody and Chris thought they had it all—a storybook romance, great careers, close friends,” the narrator says, but what they needed was a mortgage for a bigger place. In one scene, an avatar realtor shows the couple a home completely out of their league. When that proves impossible, the avatar quickly surrounds them with their dream home. After some frustration, the scene with the dog plays out, and the happy couple embraces.

This video, produced by filmmakers Alexander Kiesl and Steffen Hacker and Engagement Labs, is the fourth movie parody created for RBC. Last year, the same couple appeared in three send-ups: a romantic comedy, a drama, and a horror story. The scripts follow a similar plotline, but show how tone, background music, lighting, and typical scenes can project an entirely different mood.

Last year, the romantic comedy trailer received over a million views. (View all four videos.) The spots, designed for a Canadian audience, are presented in English, with similar versions, with voice-overs, produced for French-speaking Canadians.)

“Millennials have grown up digital, and they consume media differently,” says Jacobs. He says the mortgage process has many facets for first timers, and he says the four spots are intended to capture them all in a movie context.

Millennials are known, in some circles, for short attention spans, but the videos average an 80% watch-through rate, according to Anthony Wolch, chief creative officer for Engagement Labs. Social-listening research performed to prepare for the campaign found that first-time homebuyers are overwhelmed and scared by the home finding and financing process. The bank and the creative firm aimed to use the humor of the parody spots to ease viewers’ minds.

“The range of emotions can be like a roller coaster,” says Jacobs. He says the bank is pleased with the exposure that the videos have created, though he says there are too many factors to point to results attributable solely to the videos.

Neither Jacobs nor Wolch would discuss costs specifically. But Wolch said airing on YouTube and in theaters costs much less than television time, and reached the bank’s target audience well.