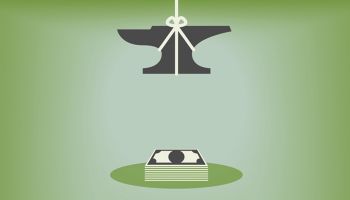 Banks and thrifts cut provisioning in the third quarter despite some concern that the credit cycle is approaching a turn.

During the 2008 credit crisis, banks built huge reserves to handle the massive spike in mortgage defaults. As mortgage delinquencies abated, banks were able to release reserves at a rapid clip, acting as an earnings tailwind for the industry.

At the start of the year, it appeared those days were over as energy concerns forced banks to increase provisioning on a linked-quarter basis. But energy prices have rebounded, dampening concerns of losses from the oil-and-gas sector.

That has allowed banks to pull back on provisioning over the last two quarters. After the industry posted a recent peak of $12.6 billion of loan loss provisions, the figure shrank by 6% in the second quarter and then by 5% in the third quarter to come in at $11.4 billion in the third quarter.

"When looking at the overall numbers, the improvement in oil-and-gas prices and energy provisioning was a big story," said James Sinegal, an equity analyst with Morningstar.

As oil prices cratered, banks set aside significant reserves for expected loan losses that have not fully materialized. Banks have been able to release some of those reserves, offsetting increased provisioning in other parts of their loan portfolios such as consumer loans.

Overall, banks are continuing to build reserves despite the releases related to their energy holdings. The industry, in aggregate, held $122.1 billion in loan loss reserves in the third quarter, up 0.3% from the previous quarter and a 3.0% year-over-year increase. But the reserves are not keeping pace with asset growth, meaning the ratio of reserves to assets for the industry ticked down to 0.73% in the third quarter from 0.74% in the second quarter.

The reduced provisioning levels might seem troublesome given reports of rising delinquencies in certain segments of the economy.

On Nov. 30, the Federal Reserve Bank of New York published a blog post noting that lenders were continuing to increase holdings of auto loans despite rising delinquencies. However, from an overall perspective, credit quality remains relatively pristine. Net charge-offs totaled just $10.1 billion during the third quarter, less than one-tenth of a percent of total assets for the banking industry. Therefore, despite lower provisioning, the ratio of provisions to net charge-offs remained above 100%, meaning banks were continuing to build their reserve bulwark against a recession.

A notable exception was Bank of America Corp., which set aside loan loss provisions equal to 94% of its net charge-offs in the third quarter. Asked for comment, a Bank of America spokesman pointed to the company's earnings release, which noted reserve releases in consumer were offset by increased reserves for commercial loans. In total, the bank reported a net reserve release of $38 million in the third quarter. 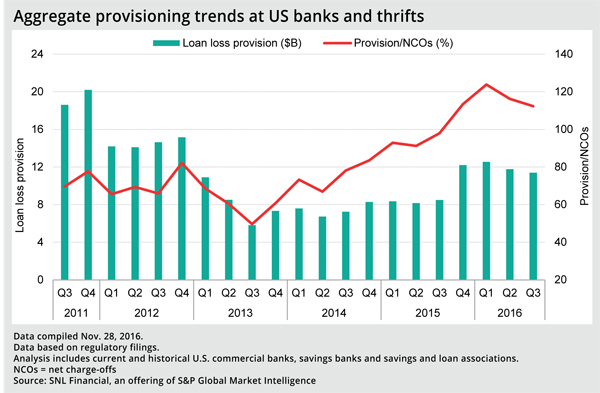 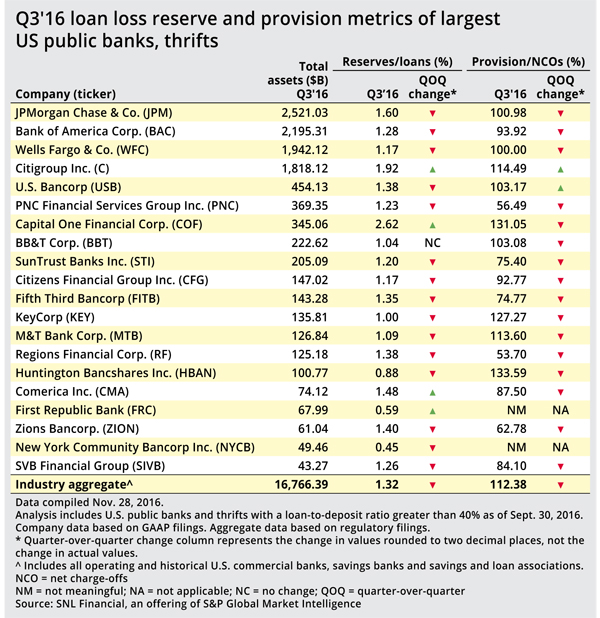 Morningstar's Sinegal, who covers Bank of America, said the company has more wiggle room to release reserves since it needed to set aside a larger amount through the crisis.

"Perhaps not due to choice but because they were forced to, Bank of America and Citigroup Inc., to some extent, because of their problems, they've been a little more conservative in the last few years than the other big banks," Sinegal said.

Indeed, among the largest banks, Citigroup stands out with a reserve-to-loans ratio of 1.92%. But the bank did not enjoy the reserve release benefit to earnings that Bank of America did in the third quarter. Citigroup was actually the only bank among the four largest to post an increase in its reserve-to-loans ratio. During the bank's earnings call, management attributed the increase largely to its acquisition of a Costco credit card portfolio.

"Most of the reserve build related to our U.S. cards franchise, driven by the Costco portfolio acquisition, volume growth and the estimated impact of newly proposed regulatory guidelines on third-party collections," said CFO John Gerspach, according to a transcript.