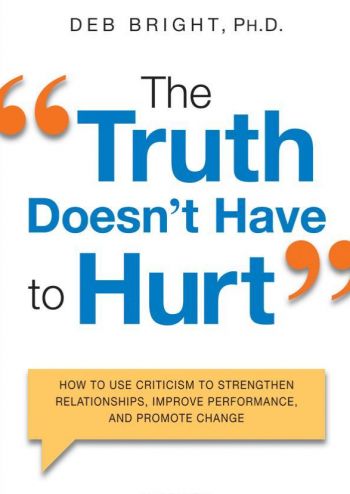 “The Truth Doesn’t Have To Hurt”: How To Use Criticism To Strengthen Relationships, Improve Performance, And Promote Change, Deb Bright, Ed.D. Amacom. 244 pp.

Who has not had a bad experience while trying to give constructive criticism at work?

Maybe the person you were criticizing didn’t take it well because they felt your point wasn’t valid. It could be that they thought you didn’t have the authority to criticize them. Or they misinterpreted your motivation as malicious.

Or, despite your best efforts, maybe you simply chose the wrong place or time to speak up.

Delivering criticism requires a delicate balance of force and tact. So much can go wrong that it can seem impossible to navigate this potential minefield successfully.

Author Deb Bright, Ed.D., operates a consulting firm that specializes in helping clients improve performance in the workplace in the areas of stress management, communication, and leadership. The ability to handle criticism effectively is a key component of successful dealings at work, and Dr. Bright’s research places it among the top ten most stressful factors that affect workplace performance.

She recognizes that the ability to deal with criticism is a skill that can be taught and learned, but that it is rarely discussed in college courses or in typical employee training programs.

“The Truth Doesn’t Have to Hurt” is Bright’s answer to that need. With the book, she hopes to provide readers the knowledge they need to give—and receive—criticism effectively.

Dr. Bright believes that in doing so readers will feel more confident about situations they encounter not only at work but also in their personal lives.

• Understanding the power and use of criticism.

• Making the exchange of criticism work for you.

Each of these serves as the overall theme of a group of chapters. The book contains a series of “coaching tips” and “quick review” sections at the end of each chapter.

Throughout, Dr. Bright advocates that these skills are crucial for both personal and professional growth because providing feedback is essential to improvement and success. And, because no one is perfect, not all feedback can be positive. It’s necessary to perfect these skills because one bad criticism exchange can derail the trust and respect that are a key component of any professional relationship.

Overall, I did not find this book to be the valuable resource that I had hoped for.  I agree with the author’s premise that learning how to give and receive criticism is vital. I was hoping for a chance to learn something new.

Unfortunately, I found the majority of the contents to be common sense, presented in an overly scientific way. For instance, one of the coaching tips is titled “A Practical Method for Developing a Praise-to-Criticism Ratio.” And later in part one the reader is taught how to establish a “Matched Relationship Expectation Package” with individuals they plan to criticize.

I believe the book focuses on treating the symptoms of a much larger issue. Instead of using flow charts to determine the right time to give criticism or consulting a checklist of “ingredients” to create “an atmosphere of acceptance” every time we have deliver bad news, we should all just be expected to act like professionals.

I think much of the book’s contents could be summed up as advice to behave like an adult in a workplace environment; not to take things that happen at work personally; and to be reasonable and sincere in all of your dealings with other people.

Of course that is easier said than done. But those are the things for which we as a professional population need more training. The solution to the problem of how to handle criticism successfully is simply to improve our communication skills in general and not rely on decision trees and bullet points to guide us in the right direction.

For instance, Bright advises the reader to carefully consider timing when delivering negative feedback. In a given example, a boss has received word of a customer complaint. The author says the boss should ask what kind of day the customer service manager has had before delivering the news and then start off the criticism either noting the damper on his good day or expressing that yet more bad news is to come.

In my opinion, this step is unnecessary and insincere. The boss should, in a professional manner, inform the manager of the problem and the manager should recognize that the issue is his responsibility and work to correct it.

Of course we should incorporate some personal interaction in our dealings with coworkers. But ultimately we are at work to do a job and a supervisor is never out of line by asking us to perform better the duties expected of us.

Another part of the book I had trouble getting beyond was the awkward language used in the sample conversations. So much of being a skilled communicator is learning to pick up on nonverbal clues like body language. Instead, the author advocates asking direct questions that I think many readers would find unusual.

For example, we are told we might begin a criticism exchange by asking whether the receiver prefers to receive bad news outright, or if they prefer the giver to “ease into the topic.”

There is valuable advice contained in this book, including reminders to try to incorporate some praise into a situation where we also plan to criticize. The author also suggests rehearsing the delivery of criticism beforehand in a potentially uncomfortable situation. Readers are also told not to throw others under the bus and to avoid public name-calling.

From the other side of the desk, the reader is urged to always assume that someone who is giving you criticism is doing so with positive intent.

While I believe such advice is generally common sense, it is helpful to be reminded from time to time.

In my own experience, delivering and receiving criticism effectively requires tact, professionalism, and not a small helping of kindness. I was eager to explore this topic in-depth with “The Truth Doesn’t Have to Hurt,” but I found it unnecessarily complicated and very repetitive.

The fact is, like so much else, the problem of how to handle criticism boils down to one simple rule: Treat others as you would like to be treated.

No flow chart could lead us better than that.

More in this category: « Bankers in their “classical” role What’s stopping you from being an innovator? »
back to top