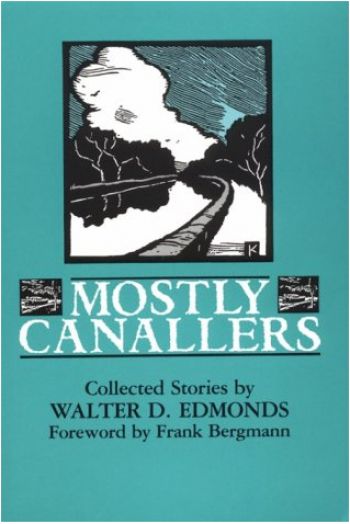 Mostly Canallers, by Walter Edmonds, is the final book in a series about books with a banker involved that we’ll tell you about in this column.

Thus far in this series we’ve looked at plucky Mattie Ross, who grew up to be a banker, in Part 1: “True Grit’s banking surprise, and other fictional financiers,” and Gideon Bates, the fictional banker, in Part 2: “The newspaper man and the fair-minded bank chairman.” Last week we looked at two bankers, one young and one old, in Part 3: “Troubled banker who did the right thing.” In this final installment, we look at bankers in fiction in one of their classic “roles”—the villain of the story.

‘Tis the season, of course, for two of the most famous fictional villain bankers of literature and film, one of whom reforms and one of whom doesn’t, but who is foiled by an angel and human goodwill.

The first is that ultimately lovable old moneylender, Ebenezer Scrooge, of Dickens’ novella A Christmas Carol and its many adaptations. Scrooge, of course, eventually reforms, but in the beginning he makes his dastardly, skinflint nature plain when approached by two businessmen attempting to raise funds to aid the poor:

Scrooge: "Are there no prisons?"

Scrooge: "And the Union workhouses. Are they still in operation?"

Scrooge: “Those who are badly off must go there."

Men: "Many can't go there; and many would rather die."

Scrooge: "If they would rather die, they had better do it, and decrease the surplus population."

Of course, this exchange just helps make Scrooge look all the better when he reforms after the visits of the Ghosts.

The movie owes its beginnings to a short story published privately and later in magazines, including Good Housekeeping. Most of the movie story came from Hollywood, including both lenders.

Having been saved from suicide by an apprentice angel, George Bailey ends the story convinced that his life is worth living and is bailed out of a ticklish financial situation by his depositors and friends. Mr. Potter loses his bid to take over the building and loan and remains grumpy greedy Mr. Potter.

Even the state bank examiner throws a buck into the basket to save Bailey. (Truly a work of fiction!)

Over the years I’ve done articles about bankers who have felt the muse to write crime mysteries, and have found it interesting that banker characters were both guilty felons as well as innocent suspects. In one book, a blustering banker turns out to be framed by another, a quiet but scheming associate.

In Tom Wolfe’s novel A Man In Full, bankers figure in the story, set in Atlanta and parts of California. A particularly memorable banker character heads a large bank’s workout unit, and applies pressure to Charlie Croker, the troubled real estate magnate at the center of the plot.

This character is the fictional PlannersBanc’s “Harry Zale.” Zale’s trademark are suspenders bearing a skull-and-crossbones design.

As Tom Wolfe writes of Zale:

“He was a workout artiste, and the workout artistes were the Marines, the commandos, the G.I. Joes of commercial banking. Or maybe the term should be D.I., for drill instructor, since Harry liked to refer to what was about to take place not as a workout session but as ‘boot camp’.”

But one of the most dramatically bad banking figures I have read of is almost a banker incidentally—he is a greedy man who is clearly, as one bit character brands him, an “old tyrant.”

This character appears in the short story “Ninety,” in the collection Mostly Canallers by Walter Edmonds.

Edmonds is perhaps best known today as the author of Drums Along The Mohawk, but he wrote extensively in novels and short stories about the people and places along New York’s original Erie Canal. Much of the lore was passed to him by relatives who’d lived in the old canal’s heyday. Fiction enabled him to climb into people’s heads and motives.

“Ninety” revolves around the 90th birthday of George Stallion, successful businessman and farmer and patriarch of an extended family he controls under his own roof with insults, hard talk, and more. Many of us have met a George Stallion in our time. They work all kinds of jobs, in my experience.

At one point when solicited by charity workers for a donation, much like a Scrooge, instead of spurning them, as he’d preferred, he gives them only a dollar as an insult, as they know well he could afford much more.

One of the group asks him to sign a petition, as he is a leading man of the town and could influence others.:

“The community looks up to you,” she flatters.

“Never asked ‘em to, mam,” he retorts. “Mostly they call me a dirty skunk, when me or my boys ain’t round.”

You can tell he enjoys his reputation.

Stallion also owns the local bank and appears to take pleasure in seizing land from mortgagees who fall behind. On his birthday he reports to work to be sure an area farmer is behind on his interest, so he can personally go out to seize the land, which he covets.

Stallion times his visit so the borrower and his family will be at their midday meal when he calls.

The borrower, insulted and harassed by Stallion, swears to bring the overdue interest payment to Stallion before midnight. Stallion presses him to the point where the man’s wife must restrain him lest he assault the elderly Stallion, who keeps taunting him.

Not your friendly neighborhood banker.

Stallion leaves contemplating the expected missed payment with glee. He thinks about giving the farm to a favorite granddaughter, though he’s scoffed at her choice of beau.

But the tables are turned. Meeting his first great-grandchild, born that very day, has made him take a hard look at his age and himself. In the midst of the birthday party that evening, Stallion disappears. Somehow, he’s lived with himself too long, and heads out to his barn.

The borrower is coming to the door as Stallion is leaving, having scrounged up the payment, but Stallion knocks him down and enters the barn. There, he does himself in.

It is the end of the “old tyrant.”

In 36 years of reporting and writing on banking, I’ve met some banking men and women with some touch or two of the heroic in them; a good deal of folks simply trying to have a decent career and a career of decency in a business that is intimately involved with money and people; and, interestingly, given the industry’s current cumulative public image, very few individuals even approaching anything like villainy. I don’t ever recall meeting a George Stallion, though here and there I’ve heard stories about figures who let their power get the better of them. No monopoly there.

In rethinking these little literary vignettes, the point comes across that it indeed takes all kinds and that humans, let alone bankers, come in every stripe.

It is for the individual banker—and banking journalist, for that matter—to make sure he or she will be able to live with the lines of their own stories.

More in this category: « How to become a Digital Bank “Uh, about the job you’re doing” »
back to top

Consumer demand and supply chain issues are driving i...